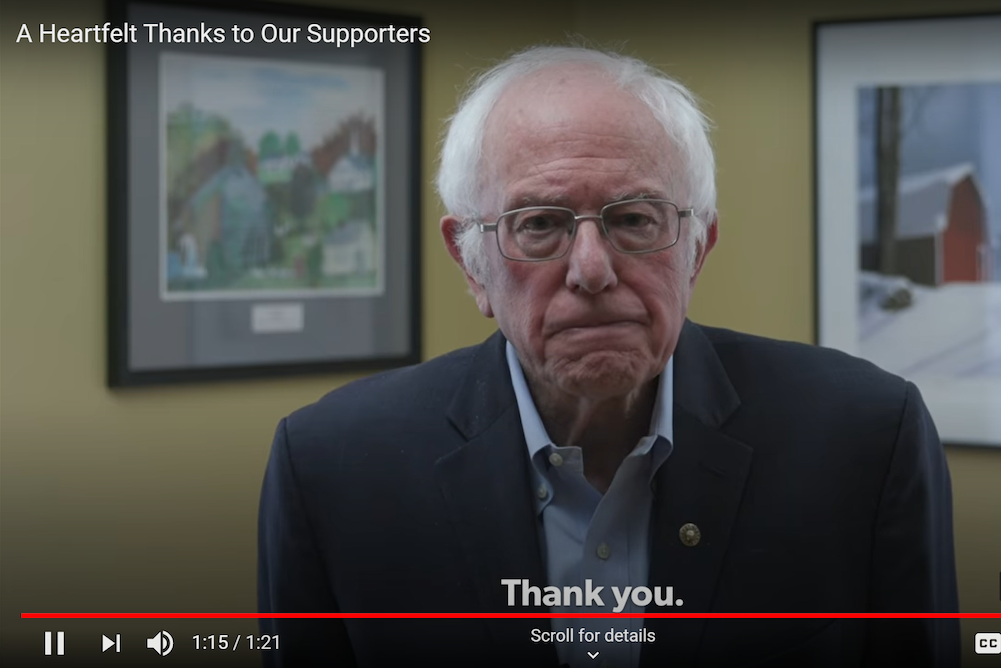 Detail of screenshot from U.S. Sen. Bernie Sanders' video about ending his campaign

Large debts are owed Vermont Sen. Bernie Sanders. Emotional debts, political debts. On just the personal and physical level, what he put himself through in his 15-month campaign for the Democratic nomination had to be wearying: near-endless short and long plane rides; aids hustling him in car rides from airports to the next podia; the exhaustion of checking in and out of third-rate motels; rarely having a placid meal; all the town hall question-and-answer sessions; speechifying before audiences in living rooms and college auditoriums where chants of "Ber-NIE Ber-NIE" shook the rafters; rarely refusing interview requests from the corporate media and pretending the questions were deep; and never flagging in seeing his progressive views as the hinges on doors that would open wide to let in the country's oppressed and repressed.

That Sanders lost on April 8 and headed home to Burlington, where 39 years earlier he was elected mayor by 10 votes, was a relief to the Democratic establishment. Its centrist play-it-safe crowd cringed when Sander's socialist leanings were noted and even worse when it was learned that he once had a kind word for Fidel Castro and his successful literacy program. It didn't help that he wouldn't back down when the Fox news media carped. He said factually on "60 Minutes" that the Cuban leader "had a massive literacy program. Is that a bad thing? Even though Fidel Castro did it?"

Nor was it a plus when it came out that in 1988 he made a Cold War visit to the Soviet Union and praised Moscow for its mass transit system. The gesture exemplified a basic principle of conflict resolution: If you want a chance for peace, don't talk to your friends, talk to your enemies.

Such an art was practiced by, of all people, Richard Nixon when he went to China for a week in 1972 and met with Premier Zhou Enlai and Communist Party Chairman Mao Zedong. June 30, 2019, saw Donald Trump in North Korea shaking hands and smiling with the dictator Kim Jong Un, one of the rare positive moments in the shameless Trump tenure. The rattles of Kim's saber have since been dimmer and dimmer.

Understanding and appreciating the 30 years of Sanders' service in the U.S. House of Representatives and Senate is to know the difference between tinkering and overhauling. Tinkerers take their car to the local garage and tell the mechanic that the brakes are shot, the gears are jamming, the radiator leaks and the steering wheel shakes. Do some tinkering on this heap, says the owner, which is how too many members of Congress go about their tinkering repairs: stick an amendment into the latest farm bill, hold hearings on the foreign aid package, propose a resolution for another Wall Street bailout. At the same time, millions of citizens face one personal and financial disaster or another: sick people unprotected by Medicare, immigrants facing deportation, college graduates deep in debt paying off high interest loans, the ill who can't afford their drugs.

Sanders has consistently dealt with those negatives and others like them by being an overhauler and never a tinkerer. The progressive reforms he's championed has meant traveling in a political vehicle in which everything works — brakes, radiator, gears, the steering wheel — as it glides past jalopies driven by tinkering centrist Democrats content to putter along.

No question about it, Sanders has imperfections. Start with his shaggy hair, rarely combed and definitely too white. Then his clothes: baggy jackets and no flag on the lapel. His speeches can be more throaty growls than polished oratory. He rarely begins by warming up the crowd with a joke or self-deprecating tale. He never trekked to the Hamptons to stroke the beautiful people at a fundraising house party. Nor did he wrap up a rally with a rote "God bless you, and God bless America."

Up against whatever those meaningless negatives might mean, his campaigning has empowered millions of donors and followers to enlist in what is now a movement with clear reformist objectives. Except perhaps for Rep. Tulsi Gabbard, none of the dozen or so candidates seeking the Democratic nomination came close to Standers' stands against America's addictive militarism, ones that go back nearly three decades. In a five-minute January 1991 speech on the House floor, he began: "We should make no mistake about it, today is a tragic day for humanity, for the people of Iraq, for the people of the United States, and for the United Nations as an institution. It is also a tragic day for the future of our planet and for the children, 30,000 of whom in the Third World will starve to death today as we spend billons to wage this war — and 25% of whom in our own country live in poverty because we apparently lack the funds to provide them with a minimal standard of living." Congress voted to invade. In the Senate, to their enduring credit, only two Republicans voted no: Chuck Grassley of Iowa and Mark Hatfield of Oregon.

Eleven years later, in October 2002, it was again Sanders who stood out in condemning the nation's impulse for military slaughter. "I have not heard any estimates," he said, "of how many young American men and women might die in such a [proposed] war or how many tens of thousands of women and children in Iraq might also be killed. … At a time when this country has a $6 trillion national debt and a growing deficit, we should be clear that a war and a long-term American occupation of Iraq could be extremely expensive."

Among the 77 senators hot to go back to Iraq were three pseudo-liberals: Joe Biden, Hillary Clinton and John Kerry.

One member of Congress who took Sanders' thinking to heart was Gabbard, a former major in the National Guard who was deployed twice to the Middle East. The congresswoman from Hawaii resigned in 2016 as vice-chairman of the Democratic National Committee. The reason? To endorse Sanders. In a touching confession that revealed her intellectual closeness to him, she wrote in a Wall Street Journal column: "A Gabbard Presidency would mean the end of trying to police the world, no more overthrowing governments, an end to the new Cold War and nuclear arms race, and redirecting our resources to urgent needs at home."

I met Bernie twice, once in his Burlington mayoral office soon after he became mayor and later when his wife Jane invited me to speak at Goddard College in Plainfield, Vermont, where she was provost. By chance, Bernie was in town that evening and came to my talk. Don't blow it, I told myself. Don't try to out-liberal Bernie. No one's ever done it. I did appreciate that Bernie did not dash out the room when I dared surmise that not all billionaires were devils.

At the post-talk reception, I felt honored that he stayed to say hello. Meeting Bernie, and having long admired his ideals and zeals, led me to think I must become a better person, a sentiment I'm sure is all too common in those who have had a few heartfelt moments with this good man.