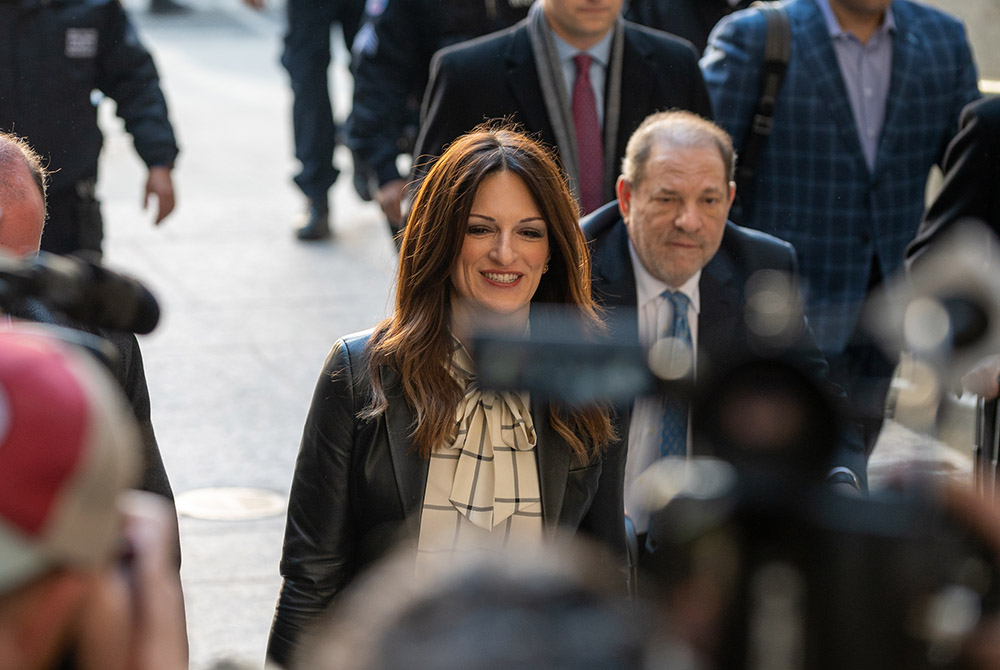 It isn't publicly known how much money Harvey Weinstein coughed up to pay Donna Rotunno, his chief defense lawyer before, during and after his February trial in New York in which he was found guilty of rape and a criminal sexual act. Was it $500 an hour? $1,000? More? Or was Rotunno a pro bono litigator? Whatever the deal, her client, led out of the courtroom in handcuffs and soon to be stamped as Inmate No. 3102000153, was accurately described by Cyrus Vance, the Manhattan district attorney, as a "vicious, serial sexual predator who used his power to threaten, rape, assault, trick, humiliate, and silence his victims."

On March 11, Judge James Burke heartedly agreed, dispatching Weinstein to 23 years in prison. With appeals surely coming, Rotunno wasn't having it, saying her client "never had a fair shake" in his trial and was treated with "total unfairness." In addition, "the jury caved." Heating up, she said the sentence of 23 years was "obscene" and "cowardly," a pair of adjectives befitting Weinstein, not the judge's decision.

Overlooking Weinstein's decadeslong record of victimizing women, Rotunno has been playing one herself, as when she wrote in The Washington Post letter to the editor Feb. 2: "When I made a decision to take on the defense of Harvey Weinstein, I was prepared for personal attacks, Twitter insults and vile words screamed at me. I was not prepared for the blatant disregard given our system of justice and my role in the process."

Had the #MeToo movement not been cresting just when Weinstein found himself in court and dozens of women had been coming forward with credible stories of his abuse, the case might not been gripped the nation's consciousness so tightly and raised the question: Why would any lawyer, woman or man, want to defend so loathsome a character who claimed that his predations against women were consensual? What's the problem? It was just two people having fun.

It's a handy theoretical bromide to argue that all defendants are innocent until proven guilty, and hail Gideon v. Wainwright, which was the 1963 Supreme Court case that assured that everyone, rich or poor, had a right to counsel. For Rotunno, it meant that in addition to insisting that her client was innocent of the charges, the chargers themselves were guilty of dishonestly defaming Weinstein in their allegations. In cross examinations of Weinstein's accusers, Rotunno and her team baited, disbelieved and ridiculed them — all in the name, of course, of due process and truth-seeking.

In the end, and after a six-week trial and five days of jury deliberations, the Hollywood film producer, who for decades kept getting away with his vileness, was finally brought down: guilty of two felony sex crimes. The reaction of Rotunno, long known for her distain of the #MeToo movement: Weinstein's life "has been ruined." Really? And not those he traumatized and brutalized? And the accusations of his violence going back some 40 years were all ungrounded?

Rotunno is hardly the first lawyer who took on a despicable client. The breed is all too common in the nation's courtrooms, whether it was Theodore Wells Jr. defending Scooter Libby or John Henry Browne defending mass murderer Ted Bundy. So common, in fact, that 15 lawyers in the defense bar can be found in the worthy and literate pages of How Can You Represent Those People.

Edited by Abbe Smith and Monroe H. Freedman, both law professors — the former at Georgetown University Law Center, the latter at Hofstra University's Maurice A. Deane School of Law — the stories include the O. J. Simpson case and the 1995 Oklahoma City bombing. Some of the lawyers helping "those people" see themselves as humanitarians or social workers, others as constitutionalists or civil libertarians. It was Clarence Darrow, patron saint of defense lawyers and described by a biographer as the "attorney for the damned," who offered a credo:

Strange as it may seem, I grew to like to defend men and women charged with crime. It soon came to be something more than winning or losing a case. I sought to learn why one man goes one way and another takes an entirely different road. … I was dealing with life, with its hope and fears, its aspirations and despairs. With me it was going to the foundation of motive and conduct and adjustments for human beings, instead of blindly talking of hatred and vengeance, and that subtle, indefinable quality that men call "justice," and of which nothing really is known.

A difficulty in defending murderers, rapists and the rest is the arbitrariness of who is proven guilty and who is not. Since 1973, 167 inmates were freed from the nation's death rows for reasons ranging from coerced confessions and mistaken identification to DNA evidence and false testimony. It has to be wondered how many of the exonerated were once interrogated by overly aggressive and deceitful prosecutors. How many were sketchily defended by low-paid, court-appointed inexperienced trial lawyers? How many judges allowed the adjudication disparities to go on?

In the end, it comes down to a lawyer's conscience on whether or not to defend a client. True, to say no could be costly: perhaps risking being fired as a junior partner in a law firm when ordered by the senior partner to defend an accused serial rapist. It can be a matter of conscience even to refuse a client because of his or her personality. Apparently none of Donald Trump's lawyers in his impeachment trial had not even a small qualm about defending a foul-mouthed, self-absorbed, insult-spewing, sexist lout.

Bleak as that may seem, my own feelings are different — ones based on 30 years of teaching a course titled "Law, Conscience and Nonviolence" at Georgetown University Law Center. I've had enough students choose public interest law as their calling to give me hope, even if just a bit, that law schools can be nurturing places for the seekers of genuine justice.