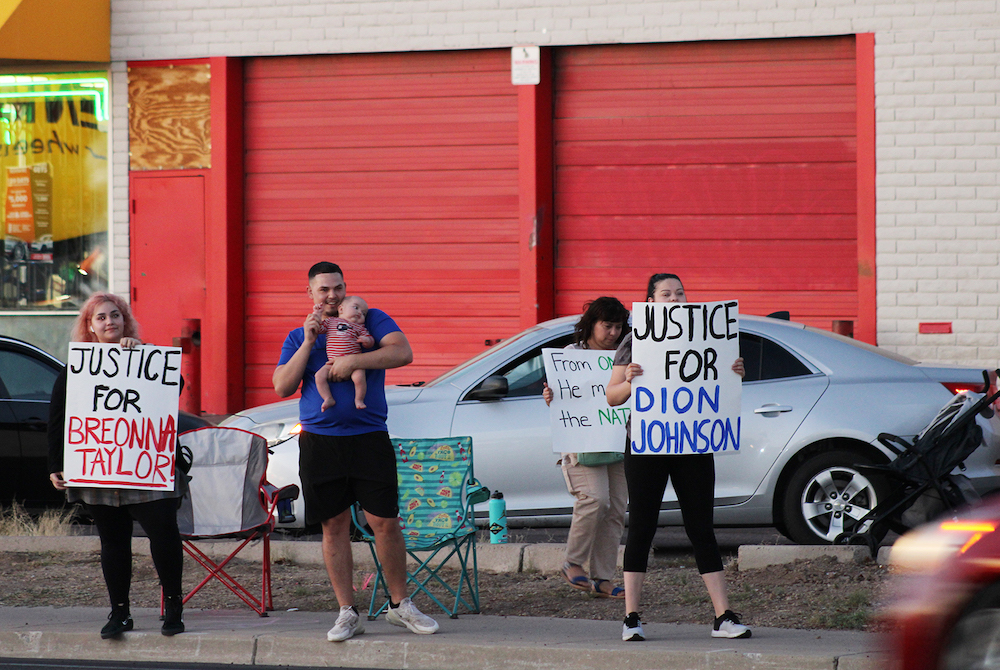 Amid the Black Lives Matter street demonstrations in all 50 states stirred by a cop murdering George Floyd on a Minneapolis pavement as the COVID-19 death toll keeps rising along with soaring unemployment, a lawn sign near one of the June marches sums it up well about the triple crises: "What a year this week has been."

Let's begin with the revolt of the generals, led by James Mattis, a Bronze Star winner while a Marine and President Donald Trump's first secretary of defense. When appointing Mattis to that post, Trump hailed him as "one of the most effective generals and extraordinary leaders of our time" and claimed he came up with the nickname "Mad Dog" Mattis. Now that the dog actually is mad, Trump knocks him as "the world's most overrated general."

In The Atlantic, Mattis writes that "Trump is the first president in my lifetime who does not try to unite the American people — does not even to pretend to try. Instead he tries to divide us. … We are witnessing the consequences of three years without mature leadership."

What provoked Mattis, and had a half-dozen other former generals and admirals breaking ranks, was Trump's blindly seeing peaceful demonstrators as "terrorists" and "thugs." Joining the military "some 50 years ago," Mattis writes, "I swore an oath to support and defend the Constitution. Never did I dream that troops taking that same oath would be ordered under any circumstance to violate the Constitutional rights of their fellow citizens — much less to provide a bizarre photo op for the elected commander-in-chief, with military leadership standing alongside."

To pull off that caper on June 1, Trump, traipsing from his White House bunker across Lafayette Park to St. John's Episcopal Church, had the assembled peaceful crowd tear gassed and routed away by National Guard troops. Up front, in the president's entourage and gussied up in combat fatigues, was the Chairman of the Joint Chiefs of Staff General Mark Milley. His about-face came on June 11 when he apologetically confessed, "I should not have been there." It "was a mistake that I have learned from."

Regrettably, Milley lacked the spine to back up his remorse by saying that for his stupidity he fully deserved to be demoted and stripped of his four stars.

Among the others disgusted by Trump's using St. John's as a prop, was Bishop Mariann Edgar Budde. As the leader of the Washington Episcopal Diocese and its 45,000 members, she was disgusted by Trump's uninvited appearance. "He held up his Bible" Budde told National Public Radio's Morning Edition, but "he did not pray. He did not offer a word of balm or condolence to those who are grieving. He did not seek to unify the country, but rather he used our symbols and our sacred space as a way to reinforce a message that is antithetical to everything that the person of Jesus, whom we follow, and the gospel texts that we strive to emulate … represent." Asked by the NPR interviewer "Do you stand with the protestors?" Budde replied, "Absolutely, with peaceful nonviolent protest, seeking justice in our land."

The day after preening at St. John's, Trump was at it again: this time standing with his third wife Melania — a Roman Catholic — in front of the St. John Paul II National Shrine which is owned by the Knights of Columbus and is a short walk from Catholic University of America. Though lacking the fiery wrath of Budde's slam, Washington Archbishop Wilton Gregory spoke with measured disdain for both the Knight's hosting Trump and the president for showing up: "I find it baffling and reprehensible that any Catholic facility would allow itself to be so egregiously misused and manipulated in a fashion that violates our religious principles, which call us to defend the rights of all people even those with whom we might disagree." 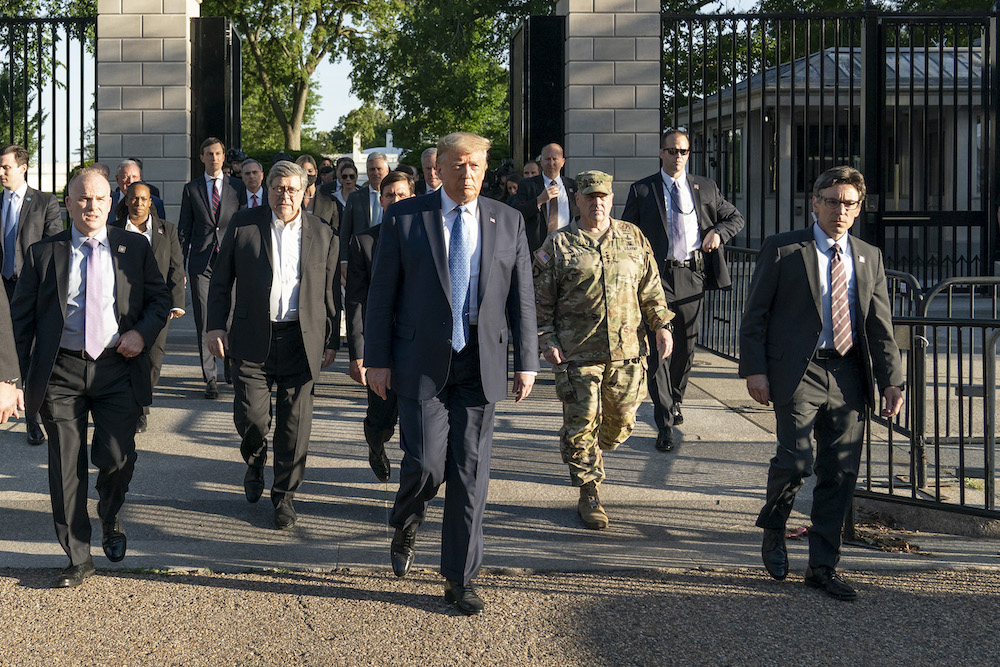 President Donald Trump walks from the White House on the evening of June 1, 2020, to St. John's Episcopal Church, known as the church of presidents, that was damaged by fire during demonstrations in nearby LaFayette Square the evening before. (White House/Shealah Craighead)

It's worth wondering how many of the nation's 17,000 Catholic parishes found priests delivering Sunday sermons endorsing the stand of Gregory. How many have condemned police brutality from the pulpit? How many have praised parishioners who have taken to the streets to protest racism in all its forms? In 1963, one year before the Civil Rights Act, two years before Bloody Sunday in Selma when white cops clubbed the skull of John Lewis, and four years before mixed-race marriages were legalized by the Supreme Court, Sargent Shriver, the director of the Peace Corps who had befriended the Rev. Martin Luther King Jr., spoke out: "As a [Catholic] layman … I wonder why I can go to church 52 times a year and not hear one sermon on the practical problems of race relations."

Whether it is Colin Powell calling Trump a chronic liar or Trump bashing opponents as "human scum" or promoting bleach as a cure to the virus, beneath those passing distractions is the harmfulness of his policies. In mid-February, Trump proposed a $4.8 trillion budget that sought slashes in domestic programs including food stamps, student loan assistance, Medicaid, community learning centers and multiple safety net legislations. Among other agencies, the Environmental Protection Agency would be cut 26%, the State Department and USAID 22% and Health and Human Services 9%. For the newly unemployed who have been fired or furloughed and the families in long lines for food handouts, Trump's budgetary wish list offers no concern or solace. His message to the struggling, poor and sick? Get lost. 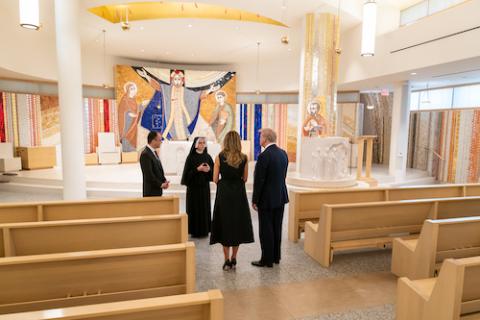 As Black Lives Matter demonstrations continue, a question persists: What exactly do the marchers and sign-holders want? Few have expressed their desires as presciently, or with as much moral clarity, as Nikhil Goyal. When a student at Goddard College in Vermont, he wrote an essay titled "Our Only Chance is Organized Resistance" that ran in The Nation in 2015:

We want free higher education. We want a universal basic income, so we can "have a life." We want climate justice. We want affordable housing and healthcare. We want more worker cooperatives.Our only chance at such a future is if we put our "bodies upon the gears," as the late activist Mario Savio once declared — engage in organized resistance. This change cannot solely happen in the halls of Congress, the courts or at the ballot box.

My peers are primed for this struggle. Many of us have been the catalysts behind Ferguson, Occupy, Fight for 15, People’s Climate March and United We Dream. We will never stop dreaming and organizing and marching for a better world.

Has this ever been better stated? Have these ideals never not been taken to heart — yesterday, today and tomorrow?