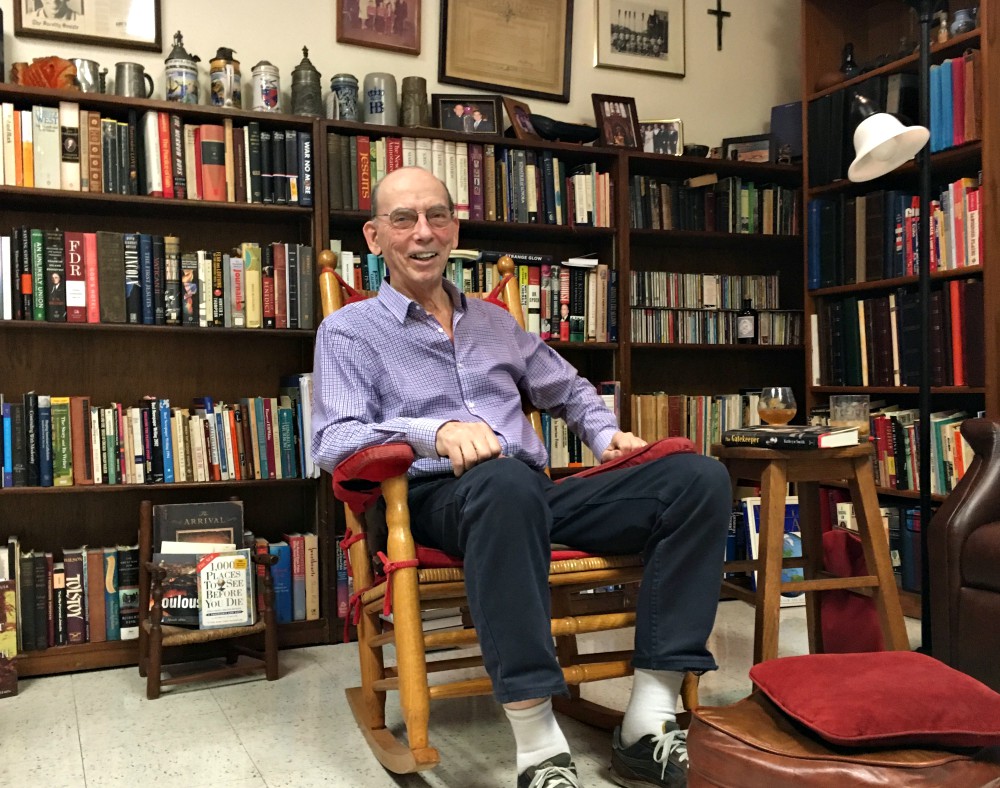 Jesuit Fr. Raymond Schroth: "Journalism embodies the basic virtues of society. We need the press to condemn what is wrong and embrace what is best for the community." (Michael Wilson)

Jesuit Fr. Ray Schroth was well-known in the Catholic press as a writer for America magazine and as the associate editor and book editor for Commonweal in the 1970s before we first met in Kansas City, Missouri, in June 1980.

What followed from our first encounter was a near four-decade journalism collaboration.

Schroth died July 1 at Murray-Weigel Hall, a Jesuit nursing facility next to Fordham University's Rose Hill campus. He was 86.

He left behind countless admirers and readers. Feeling his loss are countless more former students — now well-established professionals — who carry on gratefully, holding close the knowledge, wisdom and friendships they built and shared.

Schroth was an intellectual. He devoured books and explored their ideas. He was a teacher. He counseled and encouraged students. He was a journalist. He believed storytelling could provide solace and build a better world. He was an advocate. He pursued justice endlessly.

He was an empathetic priest who saw God's hand in all manners of things and people's lives.

An imposing figure in his prime, well over 6 feet, he was athletic and trim. He could move with grace, but, standing alone, at times he seemed awkward, a professorial sternness covering his warm heart. He could be intense, but also charming.

He would strut across campus with a ramrod posture, dressed formally in suit and tie, toting papers and books — always books — with him. Full of energy, few days would pass he did not find time to jog, bicycle or swim laps.

At age 83, he walked the Camino de Santiago pilgrimage trail in Spain, writing about it in America magazine.

He was rigorous in his class preparations. He demanded much of his students and was popular among them. He cared for their well-being. He befriended many; encouraged all. He presided at the weddings of more than a few.

His teaching inspired generations of learners, men and women, now well into their professional lives. Among them, notable attorneys and journalists, including Pulitzer Prize winners.

As much as he loved to teach, he also loved to report. He viewed journalism as a noble calling. In an NCR review of a 2018 Seymour Hersh memoir, Schroth wrote: "Journalism embodies the basic virtues of society. We need the press to condemn what is wrong and embrace what is best for the community."

His keen moral outlook spilled beyond his classes. While teaching at Fordham, for example, he initiated the "Great Walk," an annual student trek from Manhattan's Battery Park to the Bronx campus, showing them parts of New York City that they might not otherwise see, according to one Fordham News account.

Schroth used his literature classes to excite minds, to explore the human condition, and to cast light and hope. He was passionate and frequently made waves; his style did not always endear him to his peers. During his career he left his marks at Rockhurst College, Loyola University New Orleans, Georgetown University, Fordham, College of the Holy Cross, and St. Peter's College in Jersey City, New Jersey, where he ended up a professor of humanities.

He wrote eight books. Two were biographies, choices that revealed his heroes and some of his character. He focused his biographical research on Eric Sevareid, the CBS newscaster, and Jesuit Fr. Robert Drinan, who served six terms in Congress.

Of Schroth's The American Journey of Eric Sevareid, a Los Angeles Daily News reviewer wrote that it was "as much a primer on good journalism as it is a biography."

Schroth admired Drinan, 13 years his senior and another Jesuit of passion and global reach. Schroth's admiration showed in his treatise Bob Drinan: The Controversial Life of the First Catholic Priest Elected to Congress (Fordham University Press, 2010). Publisher's Weekly seemed to get it right when it called the book a "loving tribute."

As a book enthusiast, Schroth enjoyed compiling book lists. He was attracted to the classics but also sought out books that he felt shed extra light or highlighted overlooked ideas. 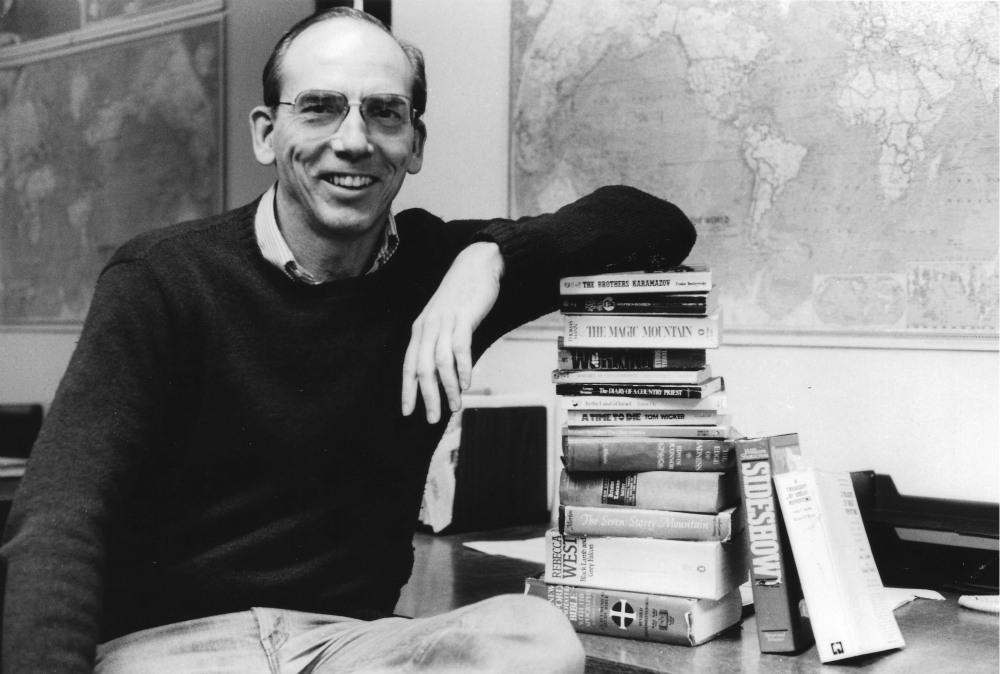 With the help of a committee, in 1983, Schroth edited College of the Holy Cross: 100 Books. He explained the book in its introduction:

This list is born out of a shared enthusiasm for reading and out of the conviction that a love for books is at the heart of both a liberal education and a happy life. ... These struck me: an emphasis on the fundamental classics of Western literature, works which could well give a unifying thread to anyone's education; an emphasis on the search for God as the central task of anyone's life: a commitment to the struggle for a just society.

"To read is to change," he wrote in 1987 in the introduction to Books for Believers: 35 Books That Every Catholic Ought to Read (Paulist Press) in which he highlighted the writings of, among others, Day, Elie Wiesel, Studs Terkel, Jonathan Schell and David Halberstam.

Schroth began writing regularly for National Catholic Reporter shortly after I arrived as editor in Kansas City in June 1980. It was the same year he arrived in Kansas City as dean of then Rockhurst College (today, Rockhurst University). He became a prolific contributor. Beyond his reporting and essays, he wrote a media column for nearly four decades, a work of love that won a first prize in the Catholic Press Association for cultural commentary.

I particularly recall news analyses he wrote during the first Gulf War in 1991. When the shooting stopped, he traveled to Baghdad for a two-week look at the damage. He visited hospitals and climbed up on the roof of the bomb shelter where U.S. "smart bombs" had killed hundreds of civilians. The trip instilled in him a profound respect for the Iraqi people.

He was appalled by war, sometimes quoting John F. Kennedy, who once wrote, "All war is stupid."

Read this next: 'You were taken seriously': Former students remember Fr. Ray Schroth

Schroth followed up on the Iraq trip with other summer visits to report from places where the usual tourists don't go — Vietnam, Cuba, Indonesia and Syria.

Schroth was born in Trenton, New Jersey, on Nov. 8, 1933, to a family of journalists and teachers. His father wrote for the Trenton Times, Brooklyn Eagle and Philadelphia Record. His mother was a teacher in the Trenton public and Catholic schools.

"Somehow I had made the basic decision inspired by both my parents' lives: I wanted to write and teach, and that's what Jesuits do. My mother was not surprised, my father, who had thought of me going into 'public life' needed a little time to get used to it," he wrote in a 2007 column in NJVoices.

In 1957, he joined the Society of Jesus and was ordained a decade later. He earned two degrees in addition to his Fordham degree: a Bachelor of Sacred Theology from Woodstock College, Maryland, in 1968, and a doctorate in American thought and culture from George Washington University in Washington, D.C., in 1971.

I know something of Schroth's life as a Jesuit professor from a visit I made to Loyola New Orleans to speak at a journalism ethics symposium he had arranged. Though tired at the end of a long day, he insisted we "go jogging" in Audubon Park. I had to push myself hard to keep up — and he was 10 years older.

He honored NCR and our long collaboration when, in May 2006, he asked me to deliver the commencement speech at St. Peter's College, one of the most ethnically diverse colleges in the country, where I received an honorary degree. He was always a thoughtful and generous soul.

[Thomas C. Fox is NCR CEO/president. He can be reached at tfox@ncronline.org.]