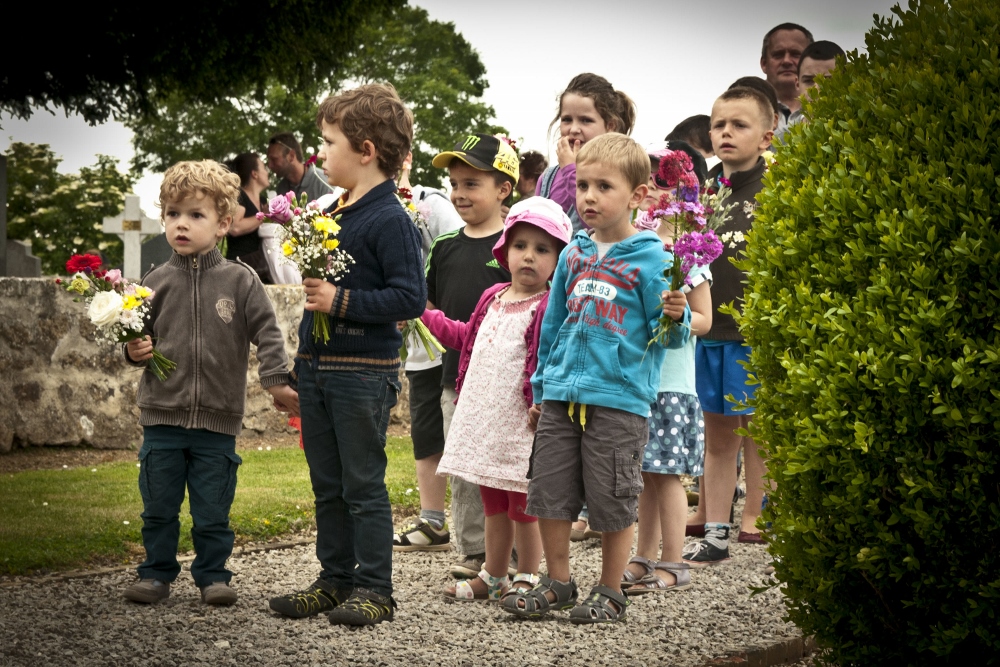 Schoolchildren in Graignes, France, wait to place flowers on a memorial during a ceremony on June 5, 2015, honoring those who died during the Battle of Graignes in 1944. (Wikimedia Commons/U.S. Army/Capt. Saska Ball)

A Catholic News Service story by Cindy Wooden reports on a recent meeting at the Vatican designed to dispel prejudice against the Pharisees. The rabbinic tradition that became the central stream of Judaism after the destruction of the Temple finds its roots in the Pharisaic tradition and in their hands, law became an amazingly rich means of organizing the community, even while allowing ample possibilities for development. The Pharisees get a bad rap in the Gospels, but their heirs prove there was more to them than that.

I wonder if the editors at Politico thought they were publishing an article that would destroy Sen. Elizabeth Warren's candidacy or help it when they published this look back at her time as a Republican. Not only does it help that people know she was once a Republican, but what really comes through is how apolitical she was for most of her life. She is the only candidate who fell into politics because of her commitment to a cause. The others are politicians who find the causes that will win the next election. Nothing wrong with that, but at a time when most Americans distrust politicians, Warren's many years in the private sector is a huge bonus.

More evidence of decline in the academy: Columbia University bows to pressure from Recep Tayyip Erdogan, the ever increasingly tyrannical president of Turkey, and cancels a panel on the rule of law in Turkey after an associate of the Gulen movement was added. Erdogan, with no evidence, blames Gulen for the 2016 coup attempt.

At the New Yorker, they celebrate the 103rd birthday of Beverly Cleary by rerunning this profile by Sarah Larson that was published on the occasion of Cleary's 100th birthday. I remember looking forward to each of her new books: Before Harry Potter, there was Henry Huggins!

It will take several more reads, and several more weeks, before I reach any conclusion about Andrew Sullivan's recent post at New York magazine about differentiating between racists and those white conservatives who simply resist change but are not inherently racist. I am betting plenty of people reached a conclusion on a first read, which tells us more about them than the essay. Sullivan displays empathy for those whom too many on the left are content to label racist, and he points out that a failure to cultivate some empathy for them only drives them into the arms of the real racists.

Relatedly, and also at New York magazine, Jonathan Chait on how Republicans are proving Rep. Ilhan Omar right about the extent of anti-Muslim bigotry in this country. You do not have to be a fan of Omar, as Chait and I are not, to recognize that her critics say things far worse than anything she is on record saying.

At Working Class Perspectives, Kathy Newman, of Carnegie Mellon University, writes about the fact that class analysis has returned to the pages of our newspapers, as seen in stories like the college admissions scandal. She gives reasons for this shift and looks to some potential impacts, the most important of which is the renewed energy within the U.S. labor movement.

At LifeWay's Facts & Trends, Bob Smietana looks at the decline in congregational singing. The article focuses more on evangelical worship, but some of the critique applies to Catholic liturgy as well. For example: "The music ministry does its own thing at times, rather than being integrated into the mission of the church," he writes. "And pastors in turn don't always value the contributions of music ministries. Instead, music is sometimes seen as a warm-up to the sermon." I have always thought that a preacher is well-advised to select an opening or offertory hymn that repeats a line from the Scripture readings, and that this provides a point of emotional connection for the congregation.

At The National Interest, an essay by historian Mary Louise Roberts looks at D-Day from the perspective of the French people who witnessed it, many of whom took great risks to assist the invading Americans. She retells the story of Graignes, where two priests were killed by the Germans "to teach the French a lesson." All in all, 19,000 inhabitants of Normandy were killed that summer. I read this article before the fire at Notre Dame de Paris, and it is good to recall that the French spirit has survived worse. Also good to recall that after the liberation of Paris, Gen. Charles de Gaulle and the other principals of the Free French movement and the Resistance went to Notre Dame for Mass and a Te Deum.