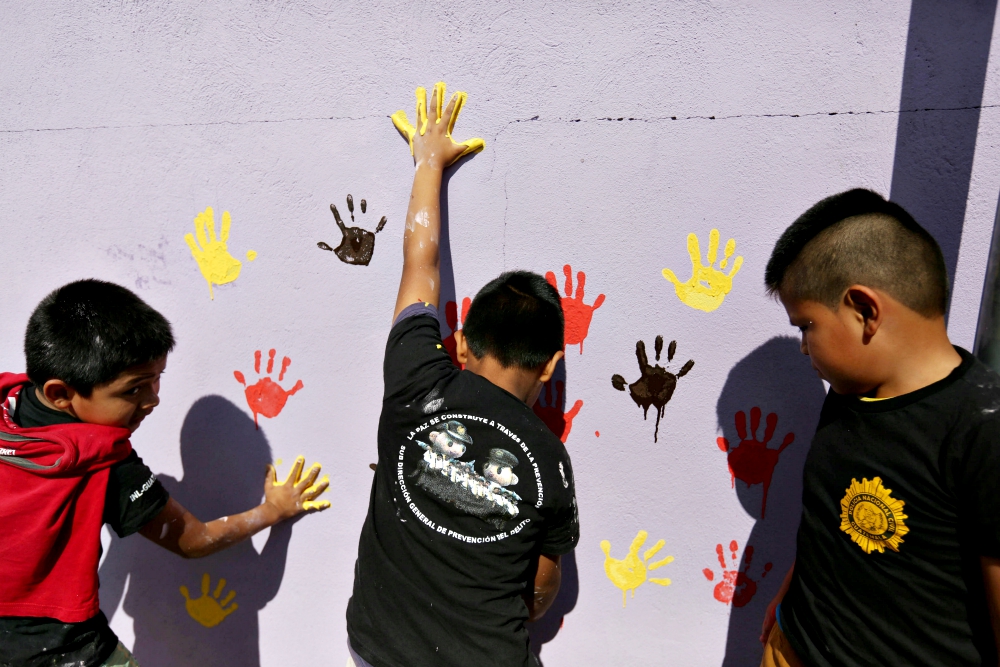 Children paint a wall with their handprints in early January 2017 as part of a project to recover walls painted with gang graffiti in Villa Nueva, Guatemala. (CNS/EPA/Esteban Biba)

Last year was a rough one in many ways.

President Donald Trump and North Korean leader Kim Jong Un's exchange of insults and violent, threatening language put the world on edge that nuclear war was, and still is, quite possible.

In Central America's Northern Triangle of El Salvador, Guatemala and Honduras, drug gangs made, and continue to make, that region one of the most dangerous places on Earth, causing many to seek refuge in the U.S. There, they were met with a 700-mile barrier screaming at them: "You are not welcome!"

Violent government ethnic persecution of the Rohingya people in Myanmar, and extrajudicial murders of suspected drug dealers and drug users by police and vigilante groups in the Philippines resulted in thousands of deaths.

The Israeli blockade of Gaza continued to make it the world's largest open-air prison. And the U.S.-backed, Saudi-led military coalition's food-and-medicine blockade of Yemen has caused one of the worst famines in decades.

Last year witnessed the largest number of displaced persons since World War II — more than 65 million people were forced to flee from armed conflicts and persecution.

During last year, much of the world was on fire. Massive blazes were burning in the United States, Canada, Russia, South America and across Europe.

And in 2017, the persecution of our brothers and sisters in Christ was unspeakable. According to "Persecuted and Forgotten?: A Report on Christians Oppressed for Their Faith, 2015-2017," published by Aid to the Church in Need, "It is clear that the persecution of Christians is today worse than at any time in history."

According to the U.N. Food and Agriculture Organization's report "The State of Food Security and Nutrition in the World 2017," there are 815 million people who are hungry — a recent increase of 38 million people. The U.N. report singles out conflict, increasingly compounded by climate change, as one of the key drivers behind the resurgence of hunger and many forms of malnutrition.

It's becoming ever clearer that there is a link between poverty, hunger, climate change, armed conflict and forced displacement of peoples.

The artificial, mean-spirited, sinful barriers built to separate us need to come down.

In his famous environmental encyclical letter "Laudato Si', on Care for Our Common Home," Pope Francis sees the environmental problem as part of a much larger, more serious problem: Our failure to consistently recognize the truth that everyone and everything is interconnected.

He explains, "When we fail to acknowledge as part of reality the worth of a poor person, a human embryo, a person with disabilities — to offer just a few examples — it becomes difficult to hear the cry of nature itself; everything is connected."

So, the God-given mission for us in 2018 is to faithfully, creatively, enthusiastically, generously and courageously use our time, talents and treasures to spread this divine truth!