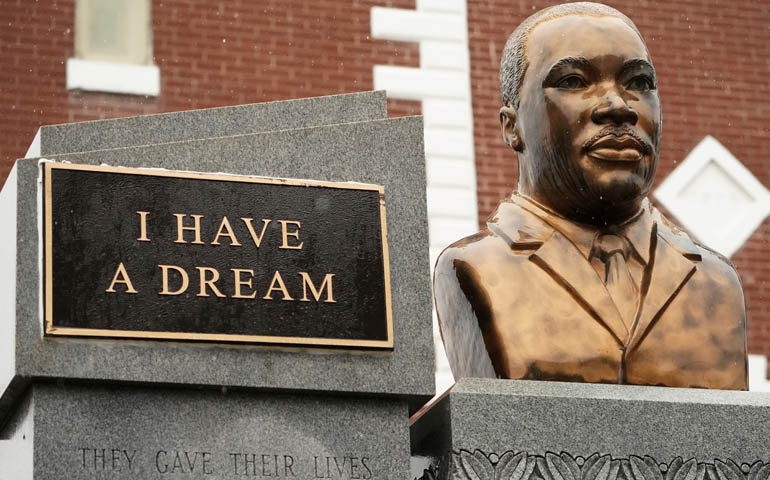 A bust of the Rev. Martin Luther King Jr. is pictured in 2017 in Selma, Alabama. The 50th anniversary of Rev. King's assassination is April 4. (CNS/Carlo Allegri, Reuters)

When a disciple of Jesus takes his or her prophetic baptismal call seriously, that person's words and actions live on long after he or she leaves this world.

An outstanding example of this truth is found in the prophetic discipleship of the Rev. Martin Luther King Jr., who, with selfless courage, faithfully lived out his God-given mission 50 years ago – albeit ending tragically too short.

For on the evening of April 4, 1968, after preaching and being present in solidarity with poorly paid African-American sanitation workers, King, while standing on the balcony of the Lorraine Motel in Memphis, Tenn., suffered a fatal bullet wound – leaving this world at the young age of 39.

On that sad day America, and indeed the whole world, lost a powerfully prophetic voice and courageous witness to the social justice and nonviolent peace teachings of Jesus Christ.

But a fatal bullet coming from one assassin or from a conspiracy of "Mafia, local, state and federal government agencies" could not silence the truthful words that continue to challenge a nation and world to completely abandon its deep-seated acceptance and addiction to racism, inequality, injustice, militarism and violence.

The messenger was killed. But his message lives on!

King said, "God intends for all of his children to have the basic necessities of life, and he has left in this universe enough and to spare for that purpose."

For example, there is indeed enough food in the world to adequately feed every single child, woman and man. And yet, according to Feeding America, over 40 million people in the United States struggle with hunger. And according to Catholic Relief Services over 800 million fellow human beings throughout the world are hungry.

Why are we allowing this to happen?

In large part this hunger suffered by so many is due to an increasing disparity between the haves and the have-nots. And President Trump's and Congress' new tax law widens this disparity.

And while most Americans think the U.S. gives at least 25 percent of its national budget to help the poorest hungriest people in the world, the truth is that the U.S. government allocates less than 1 percent towards poverty-focused international aid, according to Oxfam America. That is downright stingy.

King said, "A riot is the language of the unheard." This is a hard fact. And it applies not only in the U.S. but around the world.

I recently heard Rev. Mae Cannon, executive director of Churches for Middle East Peace, say in reference to the injustices and poverty suffered by Gazans at the hands of the Israeli government that "desperate situations leave people feeling desperate. And desperate people lead to war."

This is why Blessed Pope Paul VI famously said, "If you want peace, work for justice."

Spiritual death draws ever closer as the U.S. and many other nations continue to spend $1.7 trillion annually on war and war preparation while allowing countless people to suffer and die in poverty and hunger.

King warned, "A nation that continues year after year to spend more money on military defense than on programs of social uplift is approaching spiritual doom."

And that is where the U.S. and many other nations are at: the cliff of spiritual doom. America has "In God we trust" on its money, but in many ways not in its heart.

But it doesn't have to be this way. King encouragingly said, "The time is always right to do what is right."

[Tony Magliano is an internationally syndicated social justice and peace columnist. He is available to speak at diocesan or parish gatherings. Tony can be reached at tmag@zoominternet.net. Tony will be speaking at St. Francis of Assisi Parish in Binghamton, N.Y. on Sunday, April 15 at 9:30 a.m. All are most welcome to attend.]