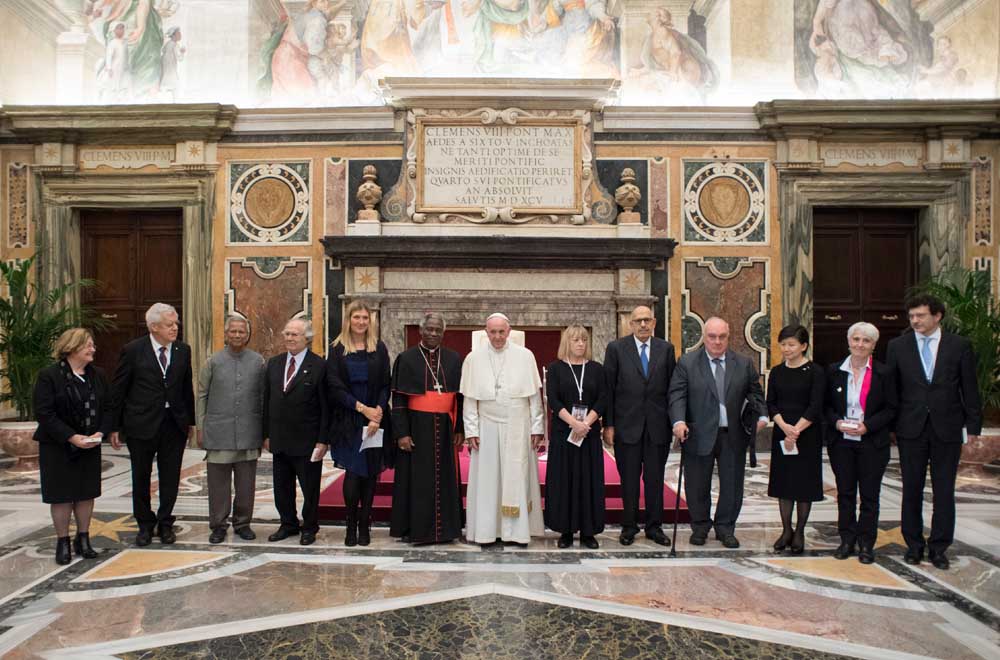 Pope Francis poses with Nobel Peace Prize laureates during an audience with attendees at a conference on building a world free of nuclear weapons, at the Vatican Nov. 10. Also pictured is Cardinal Peter Turkson, prefect of the Vatican's Dicastery for Promoting Integral Human Development. (CNS/L'Osservatore Romano)

Pope Francis is a determined man with a mission — to lead the church to best reflect Jesus' call to be the light of the world!

Within the course of just one month, he has dramatically moved the Catholic Church forward in two major ways.

On Oct. 11 — the 25th anniversary of the Catechism of the Catholic Church — before an international gathering of church leaders and ambassadors from many nations the pope declared that the death penalty is "contrary to the Gospel," and indicated that there would be a revision in the catechism to reflect this change in church teaching – or more accurately, this development of doctrine.

The Holy Father said that "No man ever, not even the murderer, loses his personal dignity, because God is a Father who awaits the return of the son who, knowing that he has done wrong, asks pardon and begins a new life." Therefore, he declared "life cannot be taken away from anyone."

Speaking before a high-profile, Vatican sponsored international symposium – attended by 11 Nobel Peace Laureates  — titled "Prospects for a World Free from Nuclear Weapons and for Integral Disarmament," the pope said we cannot fail "to be genuinely concerned by the catastrophic humanitarian and environmental effects of any employment of nuclear devices."

"If we also take into account the risk of an accidental detonation as a result of error of any kind, the threat of their use, as well as their very possession, is to be firmly condemned," said Francis.

"Weapons of mass destruction, particularly nuclear weapons, create nothing but a false sense of security. They cannot constitute the basis for peaceful coexistence between members of the human family, which must rather be inspired by an ethics of solidarity."

The U.S. has approximately 1,650 strategic nuclear warheads capable of being delivered via land, sea and air, and plans to spend over $1 trillion during the next 30 years on modernization.

"The escalation of the arms race continues unabated and the price of modernizing and developing weaponry, not only nuclear weapons, represents a considerable expense for nations," said Francis. "As a result, the real priorities facing our human family, such as the fight against poverty, the promotion of peace, the undertaking of educational, ecological and health care projects, and the development of human rights, are relegated to second place."

And this is exactly what is being reflected in the national budgets of many nations — especially that of the United States.

Congress is poised to pass the astronomical $700 billion National Defense Authorization Act which is even far larger than the $603 billion in military spending proposed by President Trump. And these huge military spending increases will largely be paid for by slashing non-defense spending programs like Medicaid, Medicare and food stamps.

So, now that Pope Francis has officially declared that capital punishment no longer has any part within Catholic doctrine, and that even possessing nuclear weapons is to be condemned, what are faithful Catholics, and all people of good will, going to about it?

Well one thing is for sure: In good conscience, we cannot ignore these challenging historical papal developments.