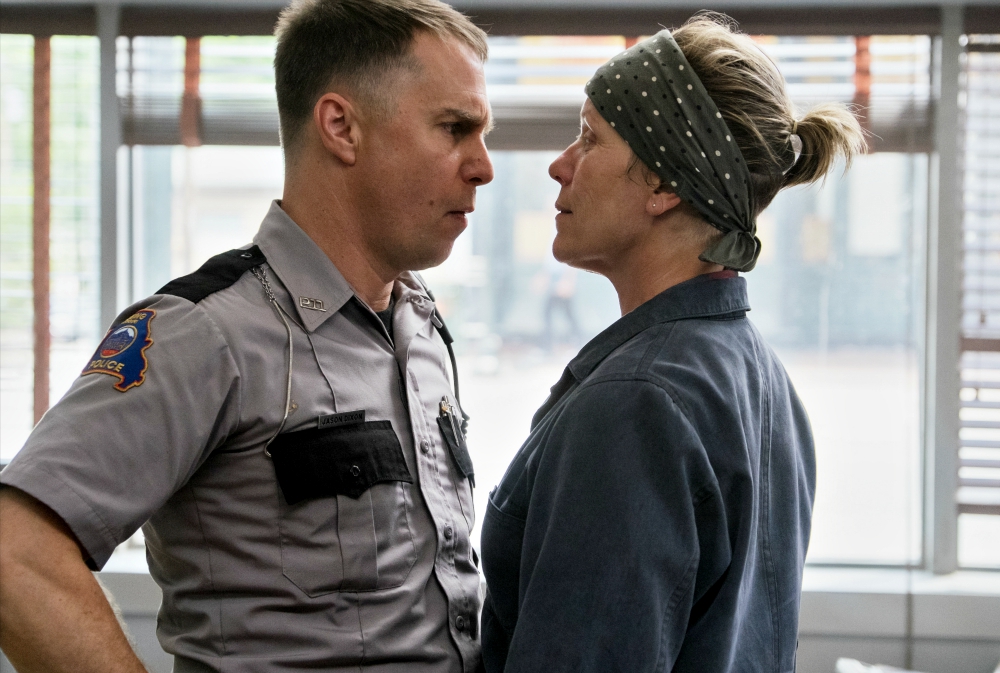 The key to understanding Martin McDonagh's latest film, "Three Billboards Outside Ebbing, Missouri," appears in the first five minutes. The sequence opens a symbolic door to the mystery of grace that unfolds in a rough story of sinful external signs peppered with cussing, violence and internal wonders of exquisite, ineffable moments of grace that rise to the surface for us to savor. The artist Corita Kent used to tell her students how to watch a film: Don't blink or you'll miss something.

"Three Billboards" is indeed a film made for semiotic analysis, semiotics being the study of how meaning and meaningful communication is made through signs. The billboards frame the story and point to a reality beyond what you see. In theological terms, they could be said to have a sacramental function by pointing to unseen realities.

Mildred Hayes (Frances McDormand), a bereaved mother of a raped and murdered teenaged daughter, marches into an advertising office to rent out three decrepit billboards along an old highway near her home. The camera moves behind young Red Welby (Caleb Landry Jones), who runs the advertising agency, and shows us the book of short stories he is reading. It is A Good Man Is Hard to Find by American Catholic novelist Flannery O'Connor. If you blink, you will have missed it.

If you are familiar with O'Connor's Southern Gothic fiction with its humor of the absurd fleshed out by eccentric characters in a Christ-haunted culture who can and do go to surprising extremes, you can just sit back and watch how grace holds their lives together and transcends the darkness that seems too heavy to bear.

As Red does some checking on the availability and cost of renting the billboards for a year, Mildred turns toward the window and sees a beetle on his back on the sill, legs flaying in the air. With an utterly tender touch, she flips him over. Watch how she looks at the creature. Her face softens with care. It is the first visual moment of grace in the film. Most people would just kill a bug. But not Mildred. Not now.

While it might seem a good man is hard to find in this story, we soon meet a cast of assorted characters among whom are some good, deeply flawed and eccentric men and women. It's as if the film is populated by just the kind of people with which O'Connor fills her novels and short stories. In the short story "A Good Man Is Hard to Find," an old, bothersome grandmother realizes that the young criminal who is about to kill her could be her own son and her whole demeanor changes. She sees him with love; she is flooded with grace just before she dies because her way of seeing has changed. 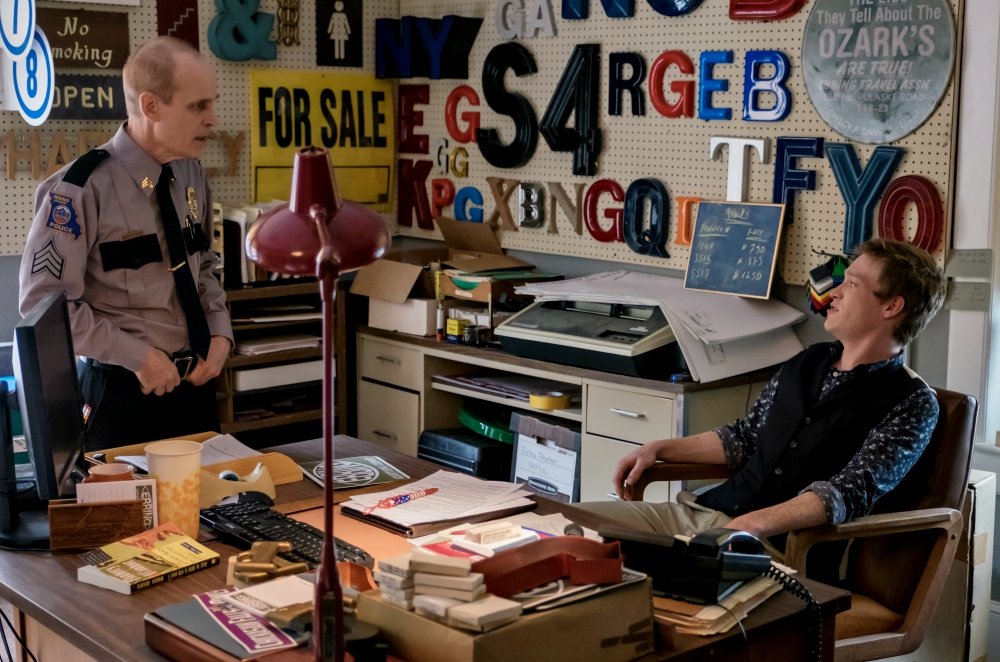 Blink and you miss it: Flannery O'Connor's short story collection "A Good Man Is Hard to Find" can be spotted on the desk of Red Welby (Caleb Landry Jones) as he talks to desk sergeant Cedric (Zeljko Ivanek) in "Three Billboards Outside Ebbing, Missouri." (Fox Searchlight/Merrick Morton)

Moments of grace like this make "Three Billboards" a deeply human and spiritual film.

Dixon (Sam Rockwell) is a rather dimwitted, racist cop with a violent streak; some think he may be gay because he reads comic books and still lives with his weather-beaten, beer-drinking mother, Momma Dixon (Sandy Martin).

The police chief, Bill Willoughby (Woody Harrelson), is a good man dying of pancreatic cancer and is married to Anne (Abbie Cornish) with two young daughters. It's hard to wrangle this small town, his police department and the open secret of his illness. Cedric (Zeljko Ivanek) is the long-suffering desk sergeant who cannot stand being called by his name.

There are Mexican and African-American characters in the film that most of the white characters, fulfilling the stereotype of Southern redneck racists, denigrate almost without thinking. Of course, Dixon is known for having beaten a black man in custody and is proud of it.

There is a dwarf, James (Peter Dinklage), who sells used cars, frequents a pool hall and is sweet on the divorced Mildred. Mildred works at a local souvenir shop with her friend Denise (Amanda Warren), an African-American woman who suffers for Mildred's actions and Dixon's mean streak.

Robbie (Lucas Hedges) is Mildred's long-suffering high school age son whom she embarrasses greatly when she puts up the billboards. Angela (Kathryn Newton) is the saucy daughter, now dead, who appears in Mildred's tormented memory that is brimming over with guilt and regret. Charlie (John Hawkes) is Mildred's ex-husband, who prances around town with his pretty but not-so-bright 19-year-old girlfriend, Penelope (Samara Weaving), who provides one of the most truthful lines in the film, "Anger begets anger," and evokes one of the funniest from a mystified James: "Penelope said 'begets'?"

The characters' words and actions are the external manifestation of all kinds of simmering negative and sinful inner dispositions, making the sacramentality of the film stands out. These arise from a young girl's murder, suicide, grief, illness, loneliness, loss, racism and frustration at justice denied. Mildred's utter distraction by the loss of her child through the agency of human violence motivates her own brand of violence. 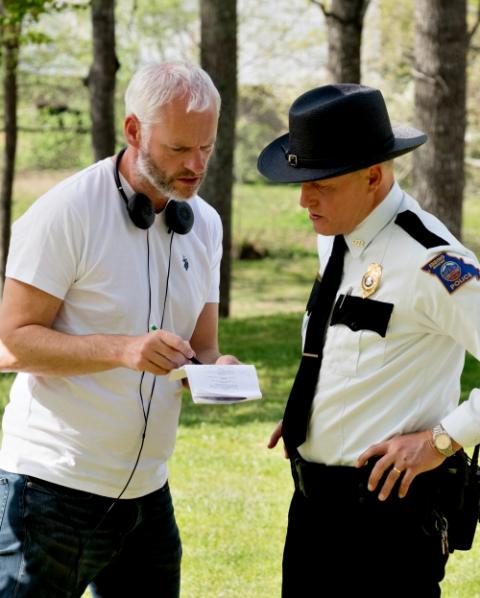 That violence does not win is an outward manifestation of inner realities, again, raising the idea of the sacramental function of film. By showing the soul's darkness through foul language accompanied by commensurate action, we are invited to observe the mystery of unexpected change, those subsequent actions framed by the choices the characters make and their expressed thoughts: the internal reality of grace in action.

This phenomenon is completely O'Connor-esque. A friend of mine, Randall Testa, reminded me of this passage from O'Connor's writings in Mystery and Manners: Occasional Prose that makes me think writer-director McDonagh is her spirit living today:

I often ask myself what makes a story work, and what makes it hold up as a story, and I have decided that it is probably some action, some gesture of a character that is unlike any other in the story, one which indicates where the real heart of the story lies. This would have to be an action or a gesture which was both totally right and totally unexpected; it would have to be one that was both in character and beyond character; it would have to suggest both the world and eternity. The action or gesture I am talking about would have to be on the anagogical level, that is, the level which has to do with the Divine life and our participation in it. It would be a gesture that transcended any neat allegory that might have been intended or any pat moral categories a reader could make. It would be a gesture which somehow made contact with mystery.

The billboards say, "Raped while dying," "Still no arrests," and "How come, Chief Willoughby?" Mildred has picked an interesting week to put up the billboards. We deduce it is Holy Week because Red promises the signs will be up by Easter Sunday and Dixon calls Chief Willoughby as he is eating his Easter dinner.

Angela has been dead for several months, the chief is dying, but a kind of resurrection is coming in the following days for this motley crew of Ebbing, Missouri.

The next evening when Mildred gets home, her parish priest, Fr. Montgomery (Nick Searcy) is sitting at the kitchen table having coffee with her son. The priest wants her to take down the billboards, telling her that she would have more compassion for the feelings of others if she hadn't stopped going to church.

To this, she makes a long, snarky argument that blames all priests for the clergy abuse scandal; she doesn't think what she has done is that bad by comparison. The argument is clever enough but maybe McDonagh just wants to establish that Mildred is Catholic. (I didn't see any churches in Ebbing.)

As O'Connor states, the gestures or actions of the characters in a successful story are to suggest contact with the mystery of divine life. Here we are at end of Holy Week, Easter Sunday and the week or so that follows. We see these surprising gestures throughout "Three Billboards," a story that works on human, religious and theological levels.

Georgetown professor Theresa Sanders her book Celluloid Saints wrote: "If we think of theology as rooted in story, it should come as no surprise that some of the most profoundly theological works of the past century have been movies."

My younger sister, Libby, thinks that "Three Billboards" is about the transformative nature of love, especially on Dixon's character. Jeffrey Salkin over at Religion News Service wrote that "Three Billboards" really won [a Golden Globe] for "best religious film." Capuchin Franciscan Fr. Erik Lenhart​, in an article in NCR, wrote that the film is a "powerful parable of violence with the heart of a monster movie."

I don't disagree with any of these assessments. It's just that I think the film is about the gift of unconditional grace in the world and the wounded humans for whom suffering prepares to receive it. I have a copy of A Good Man Is Hard to Find in my library, so I recognized the cover. It made me sit up and watch the film all the more carefully, because what young man reads O'Connor for leisure? O'Connor is a challenging author.

McDonagh is an exceptional non-derivative storyteller and this follow-up to the violently subversively redemptive film "In Bruges" defies brilliant. How he got into the Southern Gothic mode of O'Connor's Americana takes an artist with a contemplative nature, I think.

The performances in the film are all stellar but McDormand and Rockwell stand out (as proved by the Golden Globe Awards and Screen Actors Guild Awards they won at both ceremonies for Best Actress and Best Supporting Actor, respectively). I couldn't stand his character — and then I loved him. His growth as a human person was believable because he remained who he was even as he surprised us. Change is possible.

It is a film promising that unconditional, unexpected grace would be revealed by words and gestures indicating both this world and eternity transcended by the Divine mystery of grace.

O'Connor also wrote that grace operates surrounded by evil. And what is important is not if the story is negative or positive but if it is believable. It is a matter of getting across the reality of grace to an audience that is not adequately equipped to believe anything.

By O'Connor's criteria is "Three Billboards outside Ebbing, Missouri" believable? I think so. It is my favorite film of 2017.