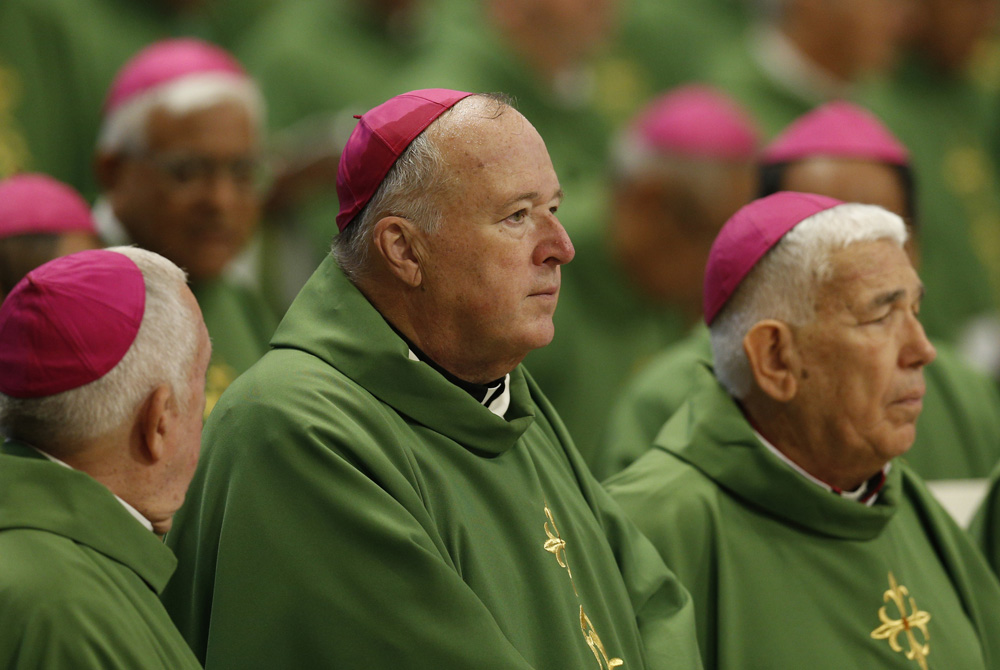 San Diego Bishop Robert McElroy attends the opening Mass of the Synod of Bishops for the Amazon celebrated by Pope Francis in St. Peter's Basilica at the Vatican Oct. 6. (CNS/Paul Haring)

How about if we just informally add a designation to the Catholic calendar in the United States and call November "Bishops' Month." It's when they all gather in Baltimore and give it their best shot. They get lots of media attention and all the Catholic-type wonks do their best to understand the deeper meanings of the whole deal. Our columnist Michael Sean Winters pretty well summed it up this year when he characterized the recent agenda as "a nothing burger."

We deal in greater depth with the dismal side of things in an editorial. And national correspondent Heidi Schlumpf wrote an informative analysis of the political implications of conference actions.

Don't despair. Shoots of hope poke through the frozen turf.

That is probably the question we at NCR most encounter among Catholics who have one foot in and one foot out of the church. It is a question laden with frustration and the inherent limits of a hierarchical system. If "they" at the top don't want to do anything and don't want you to do anything, there is little that will occur within the institution's boundaries.

That was the "reluctant conclusion" of San Diego Bishop Robert McElroy in a recent lecture he delivered at St. Mary's University in San Antonio.

McElroy said he was asked to address "how the church in the United States might move forward from this most painful moment in its history. My suggestion would be to embrace the type of synodal pathway that the church in the Amazon has been undergoing." McElroy was chosen by Pope Francis to attend the Amazon synod, a gathering that the U.S. bishop found marked by "deep and broad consultation, the willingness to accept arduous choices, the search for renewal and reform at every level, and unswerving faith in the constancy of God's presence in the community." 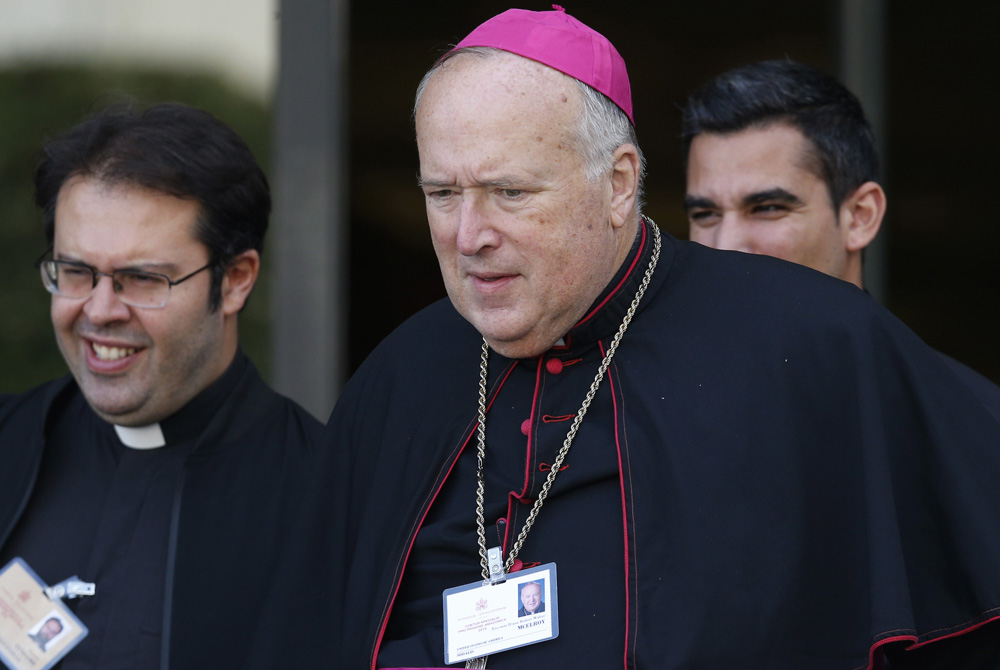 San Diego Bishop Robert McElroy leaves the first session of the Synod of Bishops for the Amazon at the Vatican Oct. 7. (CNS/Paul Haring)

Lots of people today are asking how the church can move forward from this awful moment. Actually, the moment has been going on for a long time. It is just that some Catholics have finally allowed it to penetrate the silos they inhabit and that have largely protected them from acknowledging the depth and breadth of the crisis that has been evident for decades to those who dared to look.

Suddenly, Catholic colleges and universities from coast to coast seem to be in a heated competition to run the most panels and symposia, to spend the most money, to agonize the longest and most exhaustively over the sexual abuse crisis. "How did it happen?" "What can we do about it?" Lines of talking heads newly awakened to the horror examine  the scandal that has accumulated for more than 30 years, like a dung heap in the middle of the sanctuary that communicants walk around until the stench becomes overwhelming.

What is essential, as most of the faithful intuit, is something deeper, something more authentic that engages more than bishops, and goes beyond all of the varieties of institutional accountability, necessary as they are, that have been rushed into place under pressure. A large part of the answer to "How do we move forward?" McElroy believes lies in the "synodal approach" to being church. He has engaged that process twice in his own diocese with the first focusing on Francis' exhortation Amoris Laetitia, and the second, more recent one, on listening to the voice of millennials in the church.

He also came back from the synod on the Amazon with deeper insights into how the synod process could benefit the U.S. church.

The process would require, as was the case with the gathering on the Amazon, an honest assessment of the church. 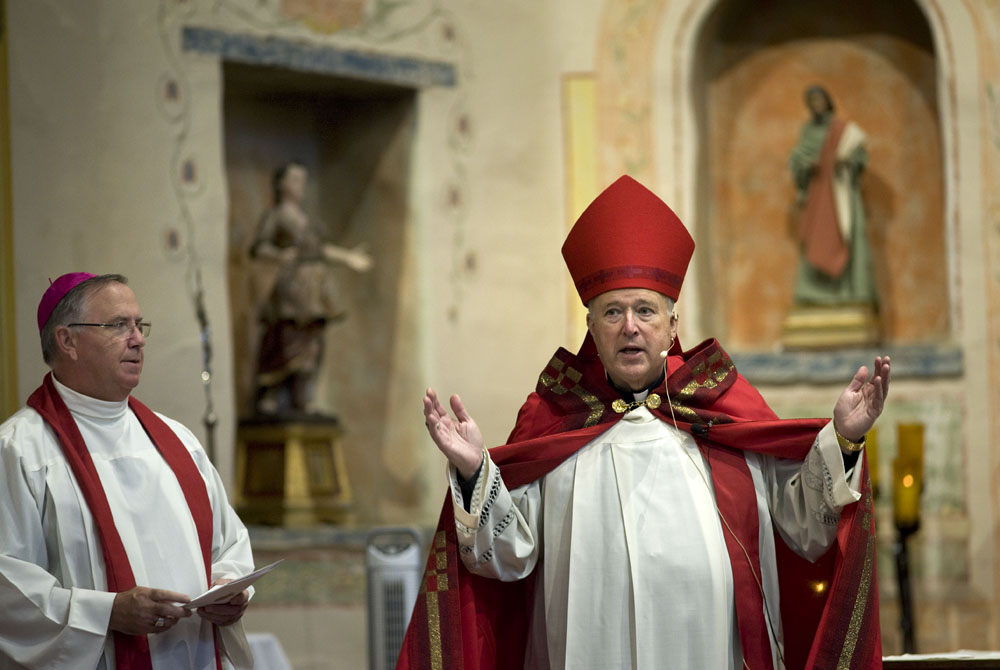 In his talk, McElroy is refreshingly frank about the current situation of a church "adrift," and the difficult task ahead. "If the church in the United States," he said in his talk, "were to embark on such a synodal renewal, it would need to make hard choices. The Catholic community could not hold back from difficult and piercing questions or searing dialogues. It would have to include a process of consultation that reaches into the heart and the soul of the Catholic community at all levels, asking men and women how they have found salvation in Jesus Christ, what graces the church has brought into their lives, how the church has hurt them."

Examples of how this might be done exist in his own diocese, in the global church and, as a national event, in the model of the V Encuentro, a broad and deep dialogue about the Hispanic community in the United States.

Unlike the Encuentro process, however, McElroy said a general synod in the United States would have to "engage more deeply and widely in general questions of governance, inclusion, clericalism and lay ministries."

McElroy said the Amazon synod had four hallmarks that could also serve as a "charter for renewal" for the church in the United States:

Each of those points, be believes, "addresses a specific element of atrophy in the American Catholic community."

Some years ago, I interviewed people throughout the country for a project that was called "The Emerging Catholic Church," and a prevailing theme that came through in many of the conversations — from the pews to the academy to even a few chancery offices — was that the future of the church had to be "relational." We're long overdue for some honest conversation. The rule of law goes only so far before it exhausts not only its potential to inspire but also simply exhausts the community.

McElroy is not alone in honestly assessing the problem. Some new voices can be heard in more honest conversation than was engaged in the past — and a few of them were captured in the reporting by Schlumpf, mentioned above. But the San Diego bishop has proposed the most systematic and far-reaching plan "to reorient us in our mission of proclaiming Christ crucified and Christ risen." It is a plan that would require "honest" and "searing" conversation from the community's leaders as well as the faithful.

I strongly recommend reading and discussing the talk as a small group study document. And you might make sure to deliver a copy of it to your pastors and bishops.

A version of this story appeared in the Nov 29-Dec 12, 2019 print issue under the headline: Amazon synod shows the way forward.