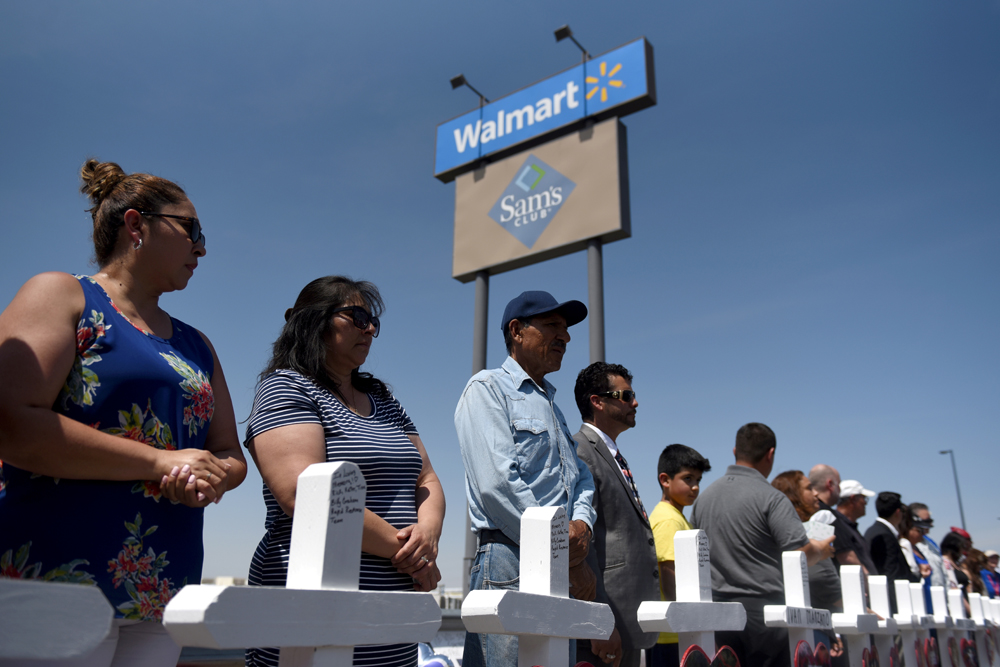 People stand near crosses Aug. 5, in honor of the victims of a mass shooting Aug. 3 at a Walmart store in El Paso, Texas. (CNS/Callaghan O'Hare, Reuters)

The essay "Hate is not welcome aquí", jointly submitted by the four writers who normally take turns producing the column Theology en la Plaza, is as eloquent and demanding a plea as any that we look carefully at and acknowledge the depth of what is occurring all around us.

Prompted by yet another extreme moment, the massacre at a Walmart in El Paso, the piece gathers up into an intense paragraph the hate-filled disposition and language of our president and their consequences. "When the administration flexes its muscle to separate immigrant families and cage vulnerable children, such actions do not make America great in any way," it reads in part. "Rather, they inflict great trauma on innocent lives and diminish our leadership and moral credibility worldwide. When our elected president singles out African American, Muslim and Latina politicians and urges they be 'sent back,' and when he revels in derisive chants and laughs at threats of gun violence during his rallies, his calls for unity ring hollow."

As compelling as the characterization is of hurt that the four were able to convey because they write as Latin@s, from within the community where "the blood of our kin cries out for justice and a better day," it is the midsection of the essay that stings with prophetic purpose. I don't use the overused term lightly. Here it applies when they make the case: "When you, your family, tu gente and the people you accompany are targets, you don't have the luxury of clicking past the news or the time to 'have no words.' "

There is, in other words, no middle ground, no seeing "both sides."

Certainly we are in a moment of some manner of social dissolution when such undisguised hate and racist laden speech can issue from the country's top official with no immediate consequence. The U.S. episcopacy, collectively and individually, has released some statements, a few of them verging on strong sentiment, but always tempered with a delicate caution. Let the name Trump not be spoken. One bishop did name President Trump in a tweet but quickly backed off, noting the need to honor the dignity of all persons. One wonders if someone on his staff might tab in his Bible the New Testament sections in which Jesus rails against abusive leaders as "whitened sepulchers," "vipers" and "hypocrites." Can we stipulate among us that Jesus was not denigrating the dignity of individuals but rather calling out injustice and abuse of the powerless?

The tragedy in the Catholic world in the United States is the episcopal paralysis that we see in the face of such inhumanity, paralysis, long under construction, that has at least two causes. The first is the abuse crisis which, over more than 30 years, has robbed the episcopacy as a whole of moral authority. When you've spent decades devising stratagems and rationales for protecting abusers and ignoring the immeasurable damage to the most vulnerable in the community, it's tough to hold position as moral arbiters.

When Philadelphia Archbishop Charles Chaput, an accomplished provocateur, wrote in the aftermath of the El Paso massacre that "only a fool can believe that 'gun control' will solve the problem of mass violence," he became a digital star for a Twitter nanosecond.

Silly as that assertion is on its face, it is likely that most didn't read what preceded and followed: His experience with the victims and families of the Columbine shootings 20 years ago when he was archbishop of Denver, of his conviction that a culture tolerant of abortion shouldn't be surprised at other expressions of violence, and that he believes in gun control ("assault rifles are not a birthright") and background checks.

And finally: “The people using the guns in these loathsome incidents are moral agents with twisted hearts," wrote Chaput. "And the twisting is done by the culture of sexual anarchy, personal excess, political hatreds, intellectual dishonesty, and perverted freedoms that we’ve systematically created over the past half-century.”

There is no small amount of truth in those assertions. But what Chaput insistently omits from his often dystopian view of contemporary culture is the fact that the quite unique culture he belongs to practiced sexual anarchy, personal excess, intellectual dishonesty, and perverted freedom to a breathtaking degree during at least the 35 years since news of clergy sex abuse first surfaced. To ignore the Catholic hierarchy's contribution to the erosion of religious authority and public morals is a convenient avoidance of inconvenient truths. The analysis becomes both diagnosis and a means to blame the whole mess on other forces beyond any individual's control. In combination with the second cause for paralysis, it allows a tolerance for a president who, in any other era, would be reviled by anyone with the mildest religious sensibility.

The second cause of the paralysis is the alignment of the majority of the conference over decades with the most extreme partisan Republican views, submerging all other political concerns beneath a narrow strategic tack on the abortion debate. So when Trump came along with his promise of conservative judges, the bishops were easily seduced. In their capitulation (certainly some exceptions duly acknowledged), the bishops essentially foreclosed for good on any consideration of important, significant conservative contributions to our political dialogue. The press releases recently issued displaying unease with the tone of the discourse from the top of the political heap are far too little and way too late.

As previously noted here, some of the most searing critiques of Trump and his administration have come not from liberals but from traditional conservatives. Ross Douthat, a conservative New York Times columnist, in a piece titled "The Nihilist in Chief," was recently unrelenting in an especially dark characterization of Trump. Echoing, of all people, fringy Democratic presidential candidate Marianne Williamson, Douthat wrote: "There really is a dark psychic force generated by Trump's political approach, which from its birther beginnings has consistently encouraged and fed on a fevered and paranoid form of right-wing politics and dissolved quarantines around toxic and dehumanizing ideas."

Douthat is not a convert to a liberal view of the world. While he opposed Trump in 2016, he warms to some of Trump's economic and foreign policy ideas and his desire to cut "low-skilled immigration." At the same time, he writes, conservatives face "a special obligation to recognize the profound emptiness at the heart of Trump himself. It's not as if you could carve away his race-baiting and discover a healthier populism. … To analyze Trump is to discover only bottomless appetite and need, and to carve at him is like carving at an online troll: The only thing to discover is the void."

One fears it's too late. The reckoning with that aforementioned dark force should have occurred long ago. In a remarkable end to his column, Douthat calculates the dilemma for conservatives that applies equally to the "many religious people" affected.

"You can chase this cultural problem all the way down to its source in lonely egomania and alienated narcissism, and you'll still find Donald Trump's face staring back to you."

He is, in this moment, the embodiment of the moral bankruptcy that Douthat and Chaput see at the core of the cultural rot and simultaneously the beneficiary of the unspoken episcopal pact with right-wing politics.

It is a macabre gridlock, a faceoff between what Douthat describes as the void and a compromised religious authority that has painted itself into a very tiny corner.

Which leaves it to us, as the Theology en la Plaza writers make clear, to move beyond the equivocation.

A version of this story appeared in the Aug 23-Sept 5, 2019 print issue under the headline: 'Both sides' is a lie that threatens Latinos.