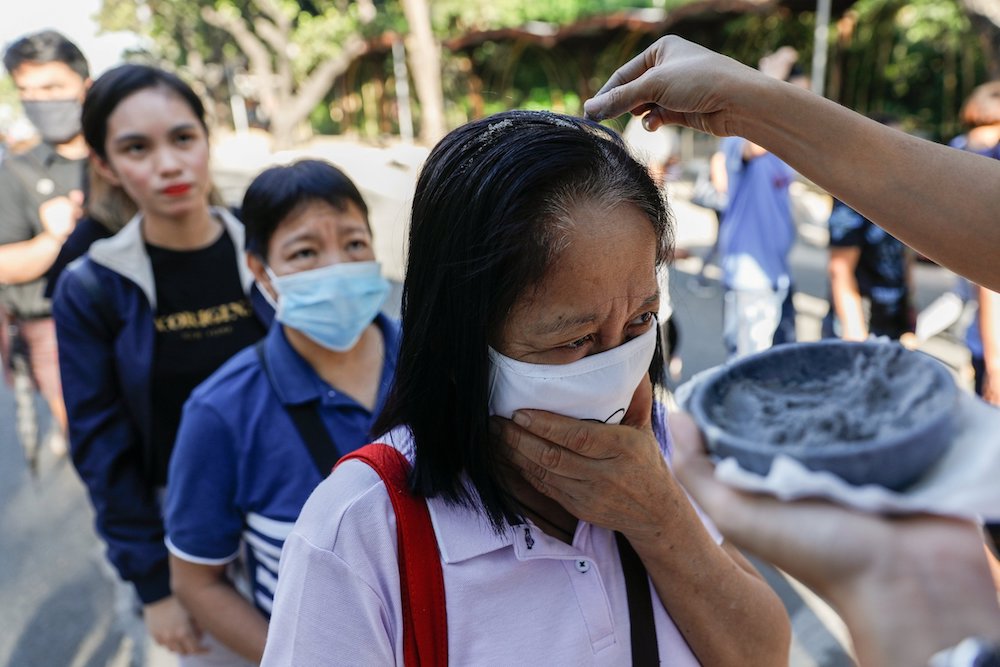 Worshippers wearing protective masks because of COVID-19 receive ashes sprinkled over their heads during Ash Wednesday Mass at the National Shrine of Our Mother of Perpetual Help in Manila, Philippines, Feb. 26, 2020. (CNS/Reuters/Eloisa Lopez)

Like everything else in this pandemic year, Ash Wednesday will not be the same. Priests have been directed by the Vatican to sprinkle ashes on tops of heads, rather than smudge them on foreheads, and to refrain from saying from saying "Repent and believe in the Gospel" or "Remember that you are dust and to dust you shall return" to each individual.

The formula will instead be pronounced to all after the priest blesses the ashes, according to a note about COVID precautions for Ash Wednesday released last month by the Vatican Congregation for Divine Worship and the Sacraments.

For those of us still skipping large gatherings, like my own household, even this modified form of the ritual may involve too much risk. But, as I recently learned from NCR columnist and Francis Effect podcast co-host Franciscan Fr. Dan Horan, it turns out that Ash Wednesday ashes don't have to come from a priest.

Time for a DIY Ash Wednesday. Now, where did I put those old palms?

If President Joe Biden's past church attendance is any indication, he will likely make time in his day to begin the church's 40-day penitential season by receiving ashes. Media hoping for a photo illustration of the country's second Catholic president's religious practices may have to settle for a bare forehead, though his white hair may allow for even sprinkled ashes to be visible.

Of course, as the Gospel reading for the day makes clear — and despite the recent trend of #ashtag selfies — Ash Wednesday is not about using this outward sign of sinfulness to broadcast one's religiosity. Jesus tells his disciples that they should do their prayer, fasting and almsgiving in secret, unlike the "hypocrites, who love to stand and pray in the synagogues and on street corners so that others may see them" (Matthew 6:5).

Still, even if the press pool coverage is only of Biden entering or leaving a church on Ash Wednesday, the news that the leader of the free world practices his faith will warm the hearts of some — and likely prompt others to once again pronounce judgements about Biden's Catholicity.

We already have an ad hoc working group among the U.S. bishops' conference dedicated to judging Biden's practice of the faith. As our national correspondent Christopher White has reported, the group's membership and meetings had been secret.

The group's task, so far, has been to release an Inauguration Day statement that briefly congratulated the president but then took him to task for his party's position on legalized abortion. Up next is a document on the importance of "eucharistic coherence or consistency," which is bishop-speak for "how to deny Biden Communion." 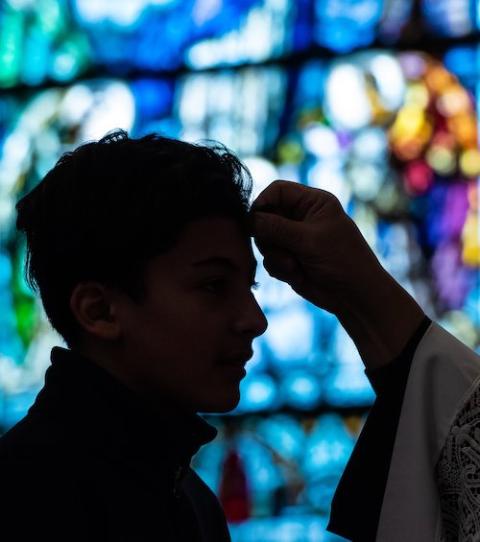 A person receives ashes on his forehead during Ash Wednesday Mass in 2019 at Sts. Peter and Paul Church in Green Bay, Wisconsin. The Vatican has asked priests to take special anti-COVID-19 precautions this year when distributing ashes on Ash Wednesday, Feb. 17. (CNS/The Compass/Sam Lucero)

I'm also an imperfect parent, but one thing I have learned in my few years trying to be a better one is that you cannot harangue a child into good behavior. In fact, a parenting class I'm currently taking encourages us to "find ways to say yes" to our children as a way of more effectively directing their behavior.

I see the bishops' conference trying to "say yes" to this new administration in its recent flurry of press releases, a majority of which have praised executive orders on immigration, COVID-19 relief and the environment.

But the "culture war" mentality is ingrained in some of our leaders, not to mention some of the folks in the pews. And the temptation to judge is strong, which may be why Jesus went out of his way to instruct his followers to "judge not" in the long teaching in Matthew that also includes the Sermon on the Mount.

As part of our Lenten discipline, Catholics practice fasting and abstinence, which often means "giving up" something for those 40 days. Here's an idea: Let's give up judging one another's faith commitments: no excommunications, no "you're not really Catholic," no potshots from the peanut gallery.

A version of this story appeared in the Feb 19-March 4, 2021 print issue under the headline: Let's give up culture war infighting for Lent.