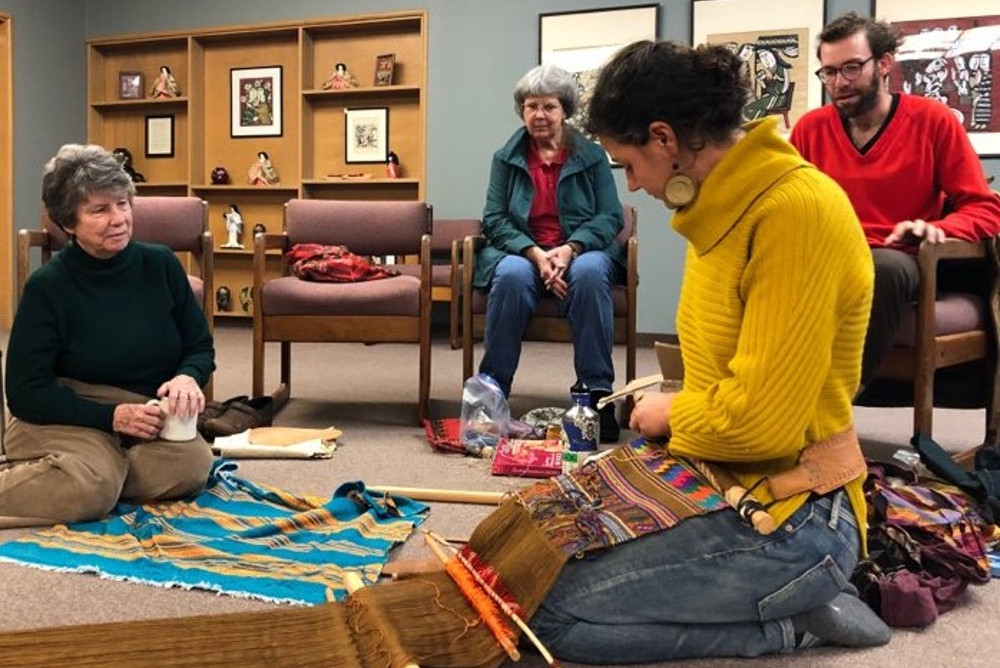 It is impossible these weeks to avoid the gloom in the church, given the endless rollout of the sex abuse crisis and the hierarchy's lurching and inadequate attempts so far to come to grips with its deepest causes. Throw in the revival of a story that first surfaced nearly 25 years ago about sexual abuse of nuns by priests in various spots around the globe, and the upcoming meeting in Rome of presidents of episcopal conferences around the world about which we were told to lower our expectations and … whew. We'll get to all of that in a bit.

But there is a far more energizing and hopeful story that perhaps you've seen — and if you haven't, you should. It's a series by Global Sisters Report staff writer Soli Salgado about nuns and "nones," those mostly millennials who profess no religious affiliation (as in "none of the above"). Part 1, as "Nuns and 'Nones' unite," can be read here. The second part, "A modern religious community," is available here.

This is a tale, wonderfully reported, about the most unlikely meeting of needs and fulfillment, curiosity and attainment, of young lives searching for something more than the fidgety nature of contemporary culture, and lives grounded in traditions whose roots reach deep into the history of Christian spirituality.

I don't want to allow my enthusiasm for the story to push me to assertions that are too sweeping and optimistic.

On the other hand, it is difficult to not see grand possibilities in this meeting of unlikely communities, ill-defined as the one might be. It is early in their meeting, but the nuns and "nones" seem to be embarking on an organic exploration of community, contemplation, spirituality.

What drives the "nones" reminds sisters of their younger selves — a passion for social justice, desire for authentic community, hunger for contemplative practice, and a willingness to devote their lives to a greater purpose. Since witnessing that overlap, many sisters have become inspired for the future of religious life.

"In some ways I see them as the modern religious congregation," said Sr. Mary Dacey, a Sister of St. Joseph of Philadelphia and former president of the Leadership Conference of Women Religious. "Certainly not the same, but the basics and the desires are there."

It is impossible, too, to view this development apart from the backdrop of the dark specter of abuse of children and episcopal cover-up, as well as against the increasing accounts of sexual abuse of sisters by priests and bishops. One yearns for a display of healthy living and spirituality within the institution, and this might be one of the best examples.

If it is, I'll venture a bit further out on the limb (aware that I am not a nun and could never be one) and suggest that these new developments are possible because women religious, unlike most of their male counterparts, have done a great deal of work digging deep into their traditions to determine what to keep, what was essential to their charism and lives as religious, and what was merely layers of habits (no pun intended) and protocols that had been appropriated over years, sometimes centuries.

In her manifesto, The Fire in These Ashes: A Spirituality of Contemporary Religious Life, Benedictine Sr. Joan Chittister compares the current state of religious life to "grieshog," an Irish term for the practice of burying warm coals under ashes to preserve the embers in order to start a fire next morning. "It is a holy process, this preservation of purpose, of energy, of warmth and light in darkness. What we call death and end and loss in our lives, as one thing turns into another, may, in these terms be better understood as grieshog, as the preservation of the coals. As refusing to go cold."

Is one thing here turning into another? One last point: What I find especially compelling in these stories is the clear sense that the "nones" were attracted to the nuns not because of religious dogma or some requirement. They were drawn because of what they saw in the lives the nuns lived. It is easy to imagine that the earliest followers of the founders of religious orders were attracted not out of some sense of obligation but rather drawn to lives of integrity and purpose. Let's see where this goes.

About that gloom? Check out the editorial on the bishops and the politics of abortion. We say maybe a new political approach would be worth a try since the bishops have failed to move not only public sentiment but also Catholics (a majority of whom believe abortion should be legal in all or most cases). A possible model for how to approach the politics of it? Try St. Pope John Paul II. Really.

We've also got an editorial ahead of the meeting in Rome of the heads of bishops' conferences around the world on the sex abuse crisis. We repeat a key insight spoken by theologian and lawyer Cathleen Kaveny of Boston college during a panel discussion last November. She noted then that the current moment has changed how Catholics think about the scandal. It's no longer a matter locked away in some dark corner of the church "but something that runs throughout the system." If that's the case, she asks, "what would have to be true of the church and its culture for sex abuse like this not to be an aberration" but something enabled by the system? I think the meeting in Rome will, at best, be a step along the way to the degree of depth necessary to answer that question.

There are but a few on the planet, would be my bet, who know as much about the clergy sex abuse crisis as Jason Berry. His writing on the subject has a distinctive, approaching unique, what-I-have-seen-and-heard quality to it. He was the first to write about in any significant way, in 1985. He broke the first national story about it on these pages, and later, with the late Gerald Renner of the Hartford Courant, broke the story about Marciel Maciel Degollado, founder of the Legionaries of Christ, long a favorite of Pope John Paul II and one of the most depraved characters in the decadeslong abuse scandal. His three-part series raises essential questions and issues, as well as opinions on what needs to happen, as Pope Francis and bishops from around the globe gather in Rome to consider the crisis.

And a note on the excerpt we ran Feb. 18 from the new book In the Closet of the Vatican: Power, Homosexuality, Hypocrisy by Frédéric Martel. The book, to be released Feb. 21, will be much talked about. The author claims to have done exhaustive interviewing and research both personally and with a large team of interviewers and translators. We will have a review of the book from Fr. Donald Cozzens, who has written extensively and honestly on the state of priesthood and the clerical culture, on Feb. 21, and a commentary on the work by columnist Michael Sean Winters on Feb. 22.

I was pleased to receive a note from Claire Schaeffer-Duffy, a long-time NCR freelancer and quite engaging writer, who was telling me she was about to "board a plane for Rome, where I will join six Catholic women on a pilgrimage of prayer and action for Holy Mother Church, who seems to be having quite a hard time these days."

Schaeffer-Duffy and her husband, Scott, have long kept a Catholic Worker house in Massachusetts (his book, Nothing Is Impossible, is an engaging, serious and humorous narrative of that life), and she said her trip was inspired by Dorothy Day's pilgrimage to Rome during the Second Vatican Council. During that pilgrimage, according to Schaeffer-Duffy, Day and about 19 other women "fasted and prayed for the church to recognize conscientious objection as an option for Catholics. Our group pondered the Rome trip even as we sent letters to U.S. bishops in advent and to Pope Francis in January asking for a broader representation of the People of God at the summit.

"I feel like I'm going into the eye of the storm. Quite clueless," she wrote. "I haven't looked closely at the clergy sex abuse crisis, and haven't really wanted to. As a convert, I considered it as a problem within the institutional church, a place I had never inhabited. But here it is now, raging all around us, overshadowing the good that drew me to Catholicism, so I am off to listen, observe, stand with the excluded ones, and pray for this tradition and faith community which has nourished me these many years."

In answer to a request, she said she would keep a journal and write of her thoughts and impressions on the other side of the meeting of bishops who lead episcopal conferences around the world.

A version of this story appeared in the Feb 22-March 7, 2019 print issue under the headline: An energizing and hopeful story.