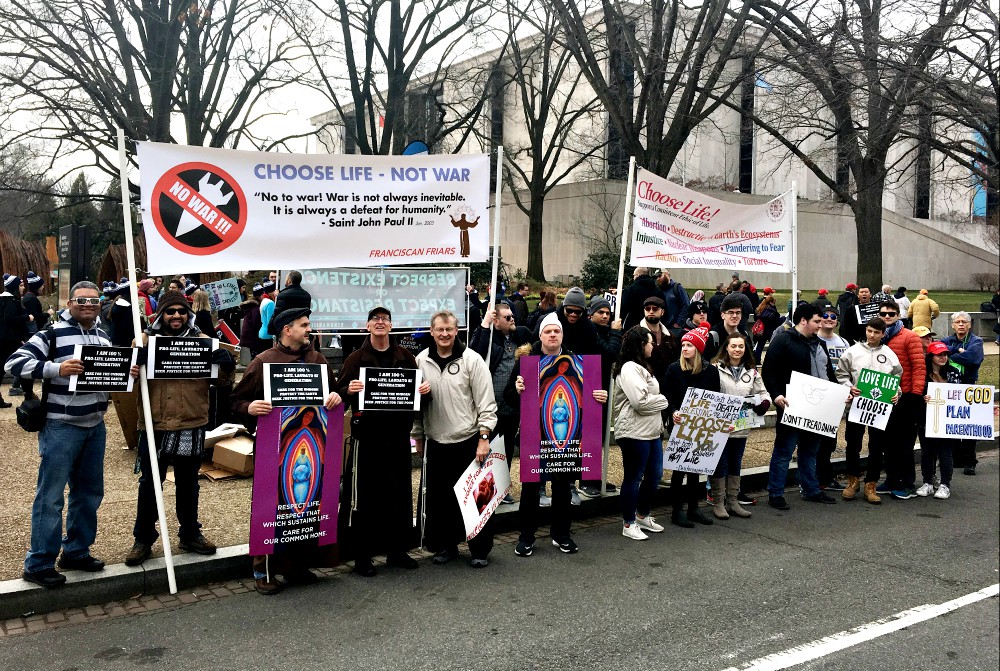 Franciscan friars and their supporters hold signs aloft outside of the security barrier where U.S. President Donald Trump spoke at the March for Life in Washington Jan. 24. The messages read, "I am 100% Pro-Life," "Care for the Unborn," "Protect the Earth" and "Seek Justice for the Poor." (CNS/Courtesy of Lonnie Ellis)

After all the campaigning and debating and town halls have ended, Catholics who head for the voting booth will have to choose a candidate. They'll have to select a person who embodies all manner of positions and competencies, as well as flaws. They will not be voting for a single issue.

"Yet comparatively little attention has been paid in Catholic moral theology to the moral nature and structure of the act of voting for specific candidates," said San Diego Bishop Robert McElroy in a talk delivered Feb. 6 at the Harpst Center for Catholic Thought and Culture at the University of San Diego.

Much focus is placed on individual policy issues and their moral implications in Catholic social teaching. If the primary role of citizens were to vote on specific issues, this might be sufficient. But a vote for individual candidates inevitably encapsulates a wide range of policy options reaching out into the future, as well as varying capacities and intentions among the candidates. Where does Catholic theology begin in assisting believers to carry out their role of ennobling the world?

That last is a huge question, especially for U.S. Catholics. NCR is privileged to bring you the full text of the talk, one that fills in huge gaps that have existed for some time in the U.S. bishops' approach to the topic of voting.

McElroy provides a way out of the tight ideological and partisan corner into which the church has been squeezed by the bishops' historically one-issue, all-or-nothing strategy on abortion, in which all other issues are relegated to a lower level of importance.

The most blatant articulation of that position came during their national meeting this year when the assembled prelates voted, over the objection of McElroy and others, that abortion is the "preeminent priority" of this moment and as such overrides all other considerations in determining for whom we should vote.

Not only has that strategy violated the intent of Catholic social teaching, but it has failed to persuade the vast majority of Catholics of the church's teaching on abortion and of how that teaching might influence public policy. Celebrating the ramming through of conservative justices merely adds another punitive layer to a strategy that is seen as mean-spirited and particularly odious coming from a celibate, all-male culture that's not done well by its own tolerance of life-destroying behavior by its members.

Further, it demonstrates a cold dismissal of Pope Francis' direct words on the matter, from his exhortation Gaudete et Exsultate:

Our defense of the innocent unborn, for example, needs to be clear, firm and passionate, for at stake is the dignity of a human life, which is always sacred and demands love for each person, regardless of his or her stage of development. Equally sacred, however, are the lives of the poor, those already born, the destitute, the abandoned and the underprivileged, the vulnerable infirm and elderly exposed to covert euthanasia, the victims of human trafficking, new forms of slavery, and every form of rejection.

McElroy lists abortion and climate change as examples of existential threats competing as single issues for Catholic votes. The task, however, is not a binary choice, since "the faith-filled voter who seeks to be guided by Catholic social teaching is confronted by compelling moral claims that cut across the partisan and cultural divides of our nation. ... For this reason, the drive to label a single issue preeminent distorts the call to authentic discipleship in voting rather than advancing it."

That conclusion is preceded by a powerful analysis of what McElroy terms a "culture of exclusion" permeating today's politics. It is a culture, he writes, that "has unleashed a poison of animosity against immigrants that paralyzes our politics so deeply that we cannot even find a pathway to protect young men and women who came to this nation as children and now thirst to be citizens of the only land they have ever known."

It is further a culture that "reinforces and propels cleavages that are highly destructive to all of the goals that lie at the center of Catholic social teaching."

Amid that swirl of social and political forces, American Catholics head to the polls and are required to choose "a candidate for public office, not a stance, nor a specific teaching of the church." It is a choice that takes being informed, it requires prudence and must assess a candidate's "opportunity, competence and character" in determining which candidate has the best chance "to actually advance the common good."

That last phrase, "the common good," is central to determining how Catholic social teaching gets translated and applied to political realities. But it is the phrase that so quickly becomes obscured by a version of Catholic fundamentalism that is reductionist in its approach to the public square.

The moral calculation is stripped of complexity if one threat to life can be totted up as more significant than another. If that's the case, then we can easily ignore those other lives that are in jeopardy, as well as the political realities and policies that threaten them: the greed that tramples the poor and causes enormous economic disparity, a degree of militarism that is wildly disproportionate and threatens the globe, a dismissal of the climate crisis and its threat to the planet. If we don't hold ourselves to a consistent ethic of life, we can't expect that of our politicians.

McElroy's talk followed closely on one given by Chicago Cardinal Blase Cupich to the national gathering of Catholic social ministries in Washington. I commented on it in the last Connections column as a speech that balanced the one-issue politics that resulted in President Donald Trump being hailed as a pro-life hero for his appearance on the National Mall.

If the Catholic hierarchy is ever to regain authority within the community and the wider culture, it will have to begin communicating as McElroy and Cupich have in talking about these difficult matters. The language inherently conveys a trust that Catholics will think seriously about serious subjects, and that they will not be driven merely by partisan passions or take the easy path of a one-issue vote.

It is communication that starts, it seems, with the belief that God is active in the lives of people. Inherent to such dialogue is the belief that well-formed Catholic consciences deserve respect.

"For the disciple of Jesus Christ," said McElroy, "voting is a sacred action. In the words of the Compendium of the Social Doctrine of the Church, it touches 'the crossroads where Christian life and conscience come into contact with the real world.' For this reason, it cannot be reduced to a logical set of propositions that yield a predetermined result in the selection of candidates."

In the last Connections column, I mentioned that Franciscan friars on the edge of the crowd that was cheering Trump were trying to send a different message about a far more complete version of the Catholic view of life. One of them was Fr. Jacek Orzechowski, a member of the Holy Name Province. In a Jan. 24 statement explaining his participation, he writes: "I have been participating in the March for Life for years. I do it because I believe in the sanctity of human life."

Orzechowski said he has pastorally counseled women "who dealt with pregnancies in very challenging circumstances and who struggled to choose life." He has also been deeply involved in a range of other life issues, from the environment to fighting poverty to opposition to nuclear weapons.

"This is why I have found President Trump's presence as the main speaker at the 2020 March for Life morally offensive," he wrote. "He is not a pro-life champion. Many of his policies are antithetical to the Gospel values and to the best of what our country stands for." Orzechowski's full statement can be found here.

A version of this story appeared in the Feb 21-March 5, 2020 print issue under the headline: A way out of the partisan corner.