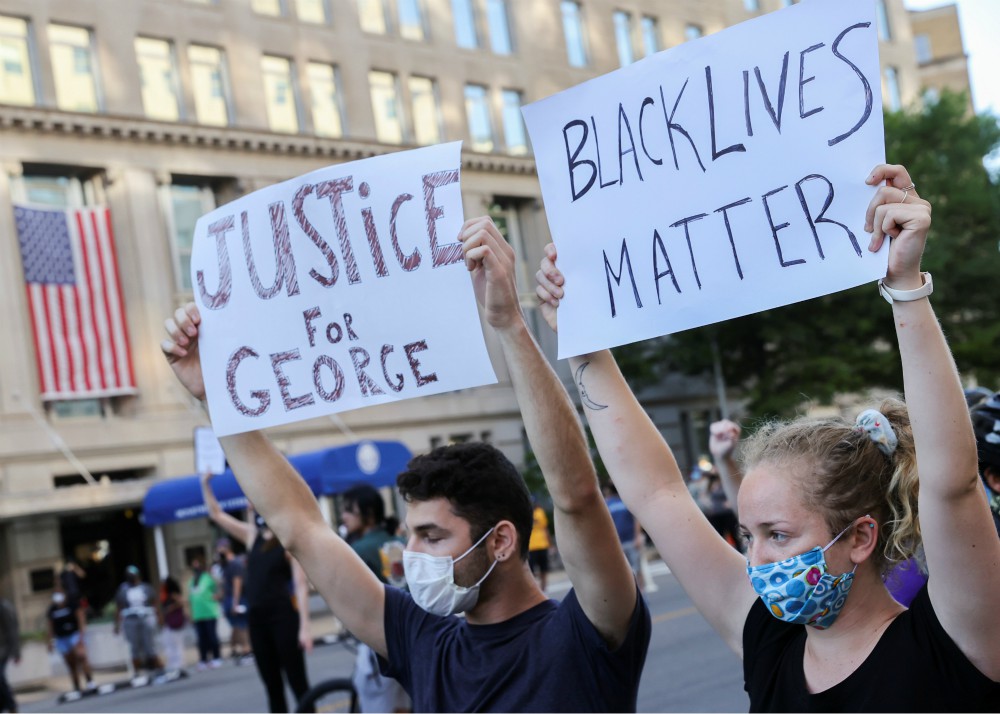 Violence against black and brown bodies is nothing new, as people of color know all too well. Neary three decades ago, four white police officers were captured on video savagely beating an African American man. His name was Rodney King.

Three of the four officers lived in the Santa Clarita Valley, where I was a young features writer at the local newspaper at the time. When they were brought to trial a year later, I was home sick, almost an hour's drive away, when news broke that none of the officers had been found guilty of assault or excessive force — this by a nearly all-white jury.

Los Angeles and the surrounding areas exploded into protests that turned violent. I remember hearing the shattered glass of nearby stores being looted, and watching the plumes of smoke from burning buildings. The rioting lasted for six days; 63 people were killed and more than 2,000 were injured.

I remember being afraid. I had a lot to learn about racism and white privilege. Having grown up in a lily-white suburb, I knew few people of color. Only one black person attended my high school, and she stayed only a year. The only African Americans I knew in college were football players. I had heard homilies about integration and racism at my church, one of those hippie, felt-banner-making parishes that so many Catholics like to disparage today. But we weren't forced to confront our own privilege as white people.

In graduate school, I took courses on black theology and read Peggy McIntosh's "Unpacking the Invisible Knapsack," which described systemic racism as opposed to individual acts of meanness. When I tried to teach about white privilege at a college where many of my students were first-generation or nontraditional students, I got a lot of pushback. It forced me to sharpen my argument in preparation for their resistance.

I live in a biracial family, but that doesn't automatically make someone less racist. I still have a lot of anti-racism work to do — for myself, for my family, for my community, for our church.

Today, our nation seems to be facing a reckoning on race — after too many violent, racist incidents now identified by their victims' names: Ahmaud Arbery, Breonna Taylor, Christian Cooper, George Floyd. Two lost their lives due to police brutality or misconduct; one was murdered while jogging; another is lucky to be alive after a white woman lied to police about him.

As news of these tragedies unfolded, I sought out my own "white people's homework," including a virtual presentation, sponsored by the Ignatian Solidarity Network, with writer Olga Segura, who is working on a book about the Black Lives Matter movement and the Catholic Church.

A few weeks earlier, Segura had written a piece for NCR in the wake of New York Cardinal Timothy Dolan's now-famous call with President Donald Trump. During the video presentation, she discussed her piece, titled "Do US bishops really believe black lives matter?"

Toward the end of the presentation, Segura was asked for any last advice she might have, given the events of the past weeks. What she said I had heard before: "I think that white Catholics who want to be allies ... their first instinct has to stop being, in moments like these, reaching out to people of color and asking them what they should be doing."

Forced to look at what Segura calls "a modern-day lynching," people of color are grieving. "There's a dread and a fatigue that we have to process," she said. "I think being an ally — a true ally — means acknowledging that, giving people of color space to breathe in moments like that, instead of gravitating to 'Help me be a better white person.' "

As the relatively new editor of a publication that values inclusiveness, human dignity and social justice, I took her words to heart and refrained from contacting African American writers to guide us through this latest iteration of injustice and the painful yet understandable expressions of rage and frustration being expressed on the streets in the aftermath.

But we are committed to having diverse voices in our pages, so we were grateful when Fr. Bryan Massingale contacted us with the essay "The assumptions of white privilege and what we can do about it." We are also glad to publish Jesuit Fr. Joseph Brown's "Black in America: I am so tired."

A number of our regular columnists have also confessed their own privilege and added their voices to the calls for justice this week. But too many of our writers — and employees in our organization — are not representative of the diversity of our church.

White people, let's do our homework. Our brothers and sisters of color can't afford for us to fail this test.

A version of this story appeared in the June 12-25, 2020 print issue under the headline: White people, let's do our homework.