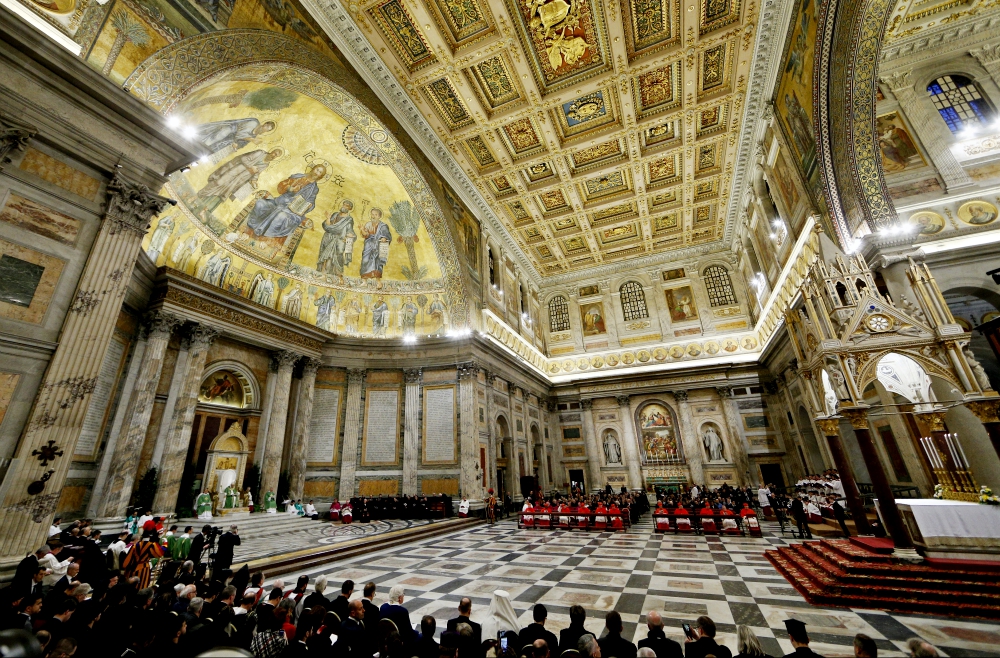 Pope Francis presides over an ecumenical prayer service Jan. 18 at Rome's Basilica of St. Paul Outside the Walls. The service marked the beginning of the Week of Prayer for Christian Unity. (CNS/Paul Haring)

The idea that Christian churches could overcome their thorny divisions and achieve oneness was far-fetched not long ago, and for the most part, it still is. But there appeared a light of inspiration to try it during the past century, and that incentive, revelation if you will, has remained in Christian consciousness, even though it's now on the churches' back burner.

Perhaps you remember how refreshing it was in the years after the Second Vatican Council to see the dream of ecumenism — a strange new term for most — declared openly and affirmatively. Since the Reformation fractured the Roman solidarity 500 years before, such a peaceful, earnest striving was virtually unthinkable. But there they were, ministers, priests, laity of various traditions, going through initial rituals in their many churches, often awkwardly, to hint at common affirmations behind the skirmishes and hostilities that seemingly posed insurmountable obstacles.

The hurdles are still formidable, but they attract far less attention as the churches have remedied only some of the tangles, faced a succession of survival troubles within them and among them, and lost incentive in the process. Most participating denominations are shrinking — including Catholicism, propped up by immigration but otherwise in decline — and globalism's power of mixing and matching cultures and spirituality has diminished Christian ecumenism's urgency.

To the extent that the relevant world church movements — primarily the Vatican, the World Council of Churches and the network of evangelicals — have furthered world blending of religion, then Christianity contributes to the reduction of attention to specific church divisions in favor of emphasizing common elements of a universal spirituality available in traditional and nontraditional creeds and practices. The struggle to reconcile centuries of theological disputes and conundrums is supplanted by a wider acceptance of all credible belief systems that serve personal needs. Without a big stage where religions stress uniqueness as the only true basis for uniting, faith seekers lose interest in special institutional claims and help themselves to a buffet of spiritual offerings.

The "Week of Prayer for Christian Unity," the annual promotion of themes aimed at enhancing harmony and banishing bias and misunderstanding, has just passed (Jan. 18-25) with little fanfare or special emphasis. Its theme this year was from Deuteronomy: "Justice and Only Justice, You Shall Pursue," a call to move from prayer to action. It came from the Indonesian part of the movement.

The movement's relatively small role in church affairs may be as much an unintentional success in advocating the long-popular feeling, however superficial it might be, that "all religions are the same." From a distance, the cause itself might be seen as evidence that Christians have buried their respective hatchets as they turn toward the things that have underlain them all along. Let church thinkers sweat the details.

We don't know the consequences of web religion that passively purveys an implicit faith in a vague spirituality without many specifics or ethical imperatives. Untold numbers of Christians draw upon meditative, mystical, dietary and lifestyle aspects of this enveloping cloud without fear of forfeiting their church ties. Pastors rarely any longer caution fiddling with such "outside" influences. They may well avail themselves of such options. Or doubt that warnings would have much effect.

An article of grassroots common sense is that "there is one God and many ways to find that God." The danger is an impulse to fall for mindless, tyrannical, abusive maniacs or group sadism. The potential is to find a contemplative means of traversing beliefs and conceptual puzzles that detour spiritual progress.

For good or ill, this "all to one" conviction is gaining practitioners, most of whom are probably at best dimly aware that their religious parameters have considerably expanded.

The same widening of perspective and narrowing of institutional Christianity is going on within theological schools. One with which I'm particularly aware once defined itself as a Christian seminary preparing students for church pastorates. Plain and simple. These days, the school isn't sure what it's doing. Some students still come as a step toward ordination. But more and more come to study a particular aspect of world religion or to become spiritual directors, psychological counselors, and other kinds of leaders for hybrid spiritual causes and movements. The seminary isn't discarding its Christian purposes, but the need for those is in decline.

From all appearances, the inherent climate of the school remains as spiritually oriented as it ever was. What binds them, however, is a spiritual mindfulness that aspires to a much different religious unity than was envisioned by the creative, foresighted founders of the ecumenical week just celebrated.