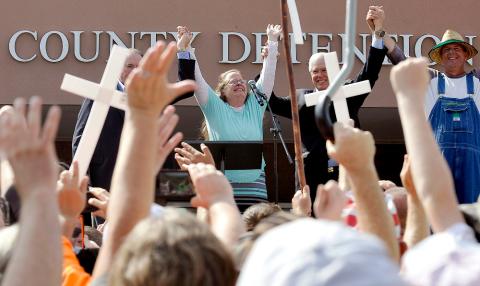 Here's some articles we posted over the weekend that you don't want to miss:

"Yes, I'm going to be at church on Sunday. That's where I've always been." Young Catholics stay to fight for church reform in wake of scandals

A couple weeks ago, we ran an essay (The 'New Ultramontanists': Why do some Catholics fear change?) by Brian Flanagan that compared the slugfest over papal infalliblity before the First Vatican Council in 1869 and today's opposition to Pope Francis' reform agenda, noting that "in both periods, it was journalists who promoted these views with the most energy and effectiveness, rather than academic theologians or even, at first, most clerics or bishops. After reading the two articles I linked to below, I more convinced than ever that Flanagan is on to something.

Conservative media move to front line of battle to undermine Pope Francis A series of Reuters interviews that reveal a union of conservative clergy and media aimed at what papal defenders say is a campaign to weaken the reformist Francis’s pontificate.

Lincoln, Nebraska -- For more than a decade, a conservative Catholic diocese in Nebraska was the only church in the U.S. that refused to participate in annual reviews of sexual misconduct that were a key reform enacted in the wake of the 2002 Boston clergy abuse scandal. Nebraska Catholic diocese rocked by old abuse allegations Is the Diocese of Lincoln paying the price for its unwillingness to change and lack of transparency?

New Jersey State Senator calls on state attorney general to empanel grand jury to investigate sexual misconduct in Catholic dioceses in New Jersey. "Given the wide scope of abuse found in Pennsylvania and the Vatican’s action against McCarrick, we must investigate now," he said.

The Buffalo, New York, Diocese has tightened security inside its Main Street headquarters, as officials try to unravel how a television reporter obtained secret clergy files. The diocese posted security guards at the doors to the headquarters, changed locks, set up a video camera and brought in a computer expert to install encryption software on email accounts.

A profile in The Jerusalem Post of the Pennsylvania state attorney general Josh Shapiro says he is rooted in a Jewish community that helped shape his values and sense of service.

And other news that we are following:

Judge Brett M. Kavanaugh will appear before the Senate Judiciary Committee today for the first day of his confirmation hearing before Congress votes on his nomination for the Supreme Court. What to Watch: The First Day of Judge Kavanaugh’s Confirmation Hearings

New York Times columnists Frank Bruni and Ross Douthat have a conversation about many things: the midterm elections, Judge Kavanaugh and at the end they discuss celibacy and the Catholic priesthood.

The political landscape for the midterm elections favors Democrats in general and women candidates in particular, a new USA TODAY/Suffolk University Poll finds, raising the prospect of significant perils for President Trump with the next Congress.

Warsaw, Poland -- The leader of Poland's conservative ruling party, whose policies have led to clashes with European Union leaders, said Sunday he wants the country to remain in the EU so it can become like western European nations "in every respect."

A Test of Faith: Being Gay in the Catholic Church Iowa Public Radio talks with Joe Jennison, who wrote the one-man show "Confessions of a Gay Catholic." (H/T Bondings 2.0 blog.)