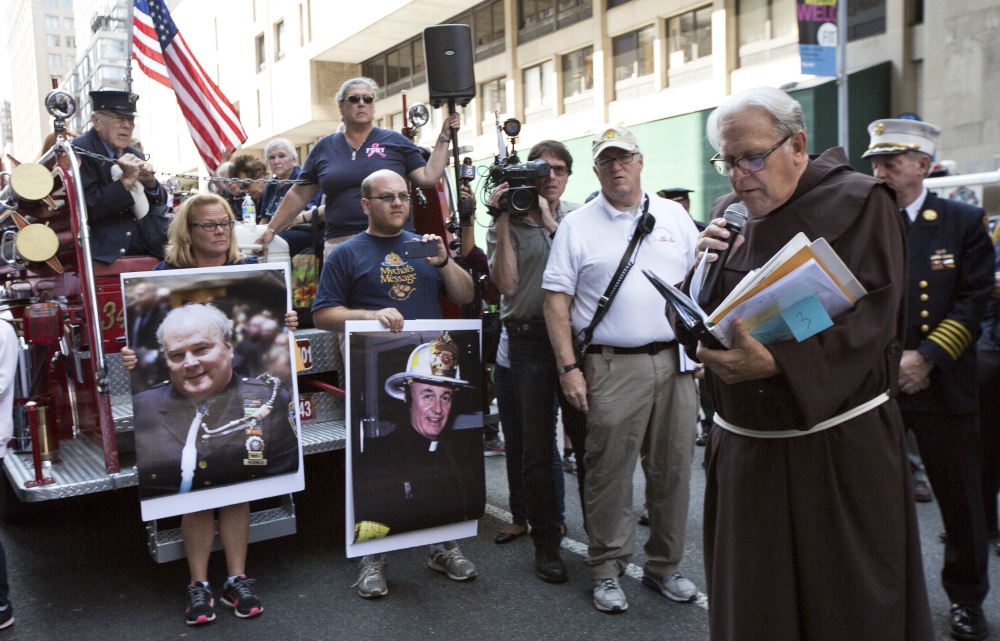 Michael Sean Winters’ recent column, “Focus on Mychal Judge as a ‘gay saint’ is problematic,” is misleading on several counts.

First, Winters bases his opinion of the possible canonization of Judge on an article from Slate, but it doesn’t appear that he investigated further than that one source. The Slate article represents reporter Ruth Graham’s perspective, but that is not necessarily the perspective of all those who would like to see Judge declared a saint. New Ways Ministry’s role in the canonization research is not synonymous with Graham’s perspective or with Winters’ implied speculation about our motives.

Second, he makes an unproven claim about New Ways Ministry’s role in the 2010 election of the president of the U.S. Conference of Catholic Bishops, and he never contacted New Ways Ministry to verify the accuracy of his information.

First, some background about the Fr. Mychal Judge issue. New Ways Ministry did not initiate the investigation into Judge’s canonization. The investigation was initiated by a postulator at the Vatican’s Congregation for the Causes of Saints shortly after Pope Francis’s motu propio in which the category of “offering of life” was included as one of the criteria for sainthood. The postulator contacted New Ways Ministry to ask for our assistance in finding people — all sorts of people — who could give personal testimony about Judge’s ministry. He told us that he thought that Judge’s 9/11 sacrifice fit the new category perfectly and that New Ways Ministry had a good communications infrastructure to help find people who knew the Franciscan priest. We responded positively to the Vatican’s request.

New Ways Ministry is glad to assist the Vatican in this investigation for many reasons, including Judge’s ministry to the LGBT community. His faith, spirituality, heroism, and lifetime of service to many marginalized groups mark him as saintly. As for his ministry to the LGBT community, that dimension has so far played a minimal role in the research. Of the close to 50 people who have responded to offer testimony, so far only one has declared knowing Judge because of his LGBT outreach. The people who responded have mentioned knowing him through the New York City Fire Department, his parish ministry in New Jersey, his work with people in 12-steps programs, and his support of people who had HIV/AIDS or who were experiencing homelessness.

So, Winters’ claim that the primary interest in canonizing Judge is because he may have been gay is not accurate. Not that there’s anything wrong with it, to quote Seinfeld.

Winters’ misinterpretation of the role of Judge’s sexual orientation in the canonization process is matched by his misinformation about New Ways Ministry’s role in the 2010 election of the USCCB president. I was most astonished to read that he claimed New Ways Ministry influenced the outcome of this vote! Wow! I did not know that New Ways Ministry had that kind of power with the bishops.

I searched my files, the Internet, and my memory, and I cannot find or recall any statement before the election, public or private, about “endorsing” Bishop Gerald Kicanas for bishops’ conference president. Did I perchance make a comment to a reporter that was printed? I honestly don’t remember, but if I did, it would not have been worthy of the label “endorsement.” I wish that Winters had supplied some evidence for the claim that New Ways Ministry had endorsed Kicanas.

Had we indeed made such an endorsement, I could not, even in my wildest dreams, believe that such an opinion would play a major role in the election’s outcome. Given the wide variety of perspectives, personalities, relationships, alliances, and issues that come to play in a USCCB election, I can’t imagine that the opinion of New Ways Ministry played an outsized role. If we did, then I should certainly be asking for a raise!

Finally, Winters’ column raises an important issue: what if New Ways Ministry had “endorsed” a candidate? I think our church would be better served if more people and organizations let the bishops know what and who their preferences for leadership are. It would end the secretive and byzantine approach that exists now. Is Winters suggesting that Catholics should not express their opinions? Or that only the opinions of insiders and pundits should be known by bishops? I hope not.

I hope this explanation clarifies the record of New Ways Ministry’s involvement with the research for Judge’s canonization, the motivation behind our interest in investigating Judge’s cause, and our supposed role in the 2010 bishops’ conference election.