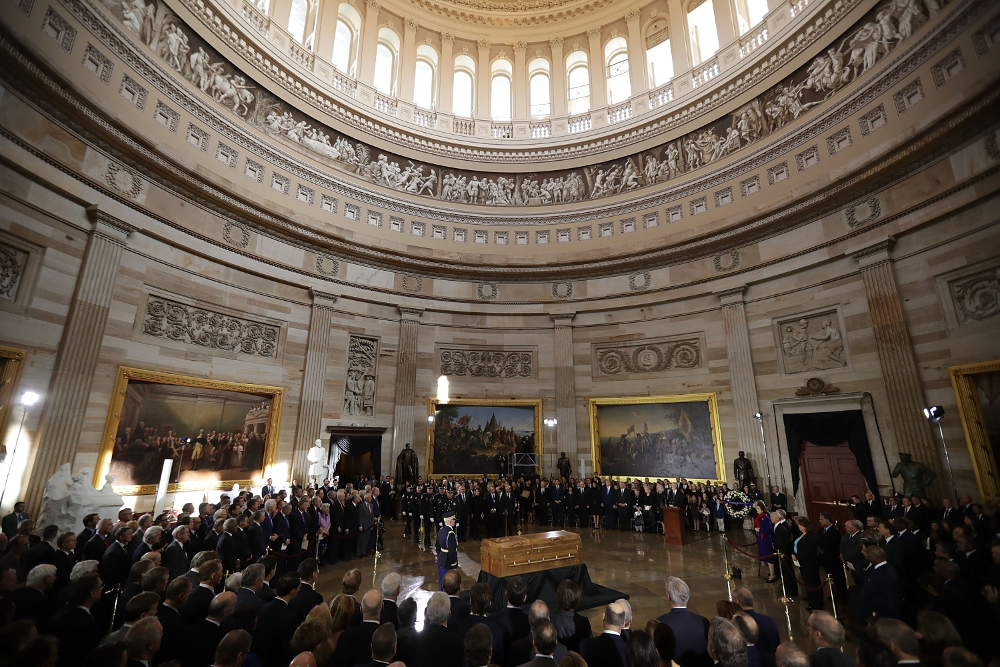 The casket with the body of the Rev. Billy Graham lies in honor during a ceremony in the U.S. Capitol Rotunda in Washington Feb. 28. (CNS/Reuters/Pool/Chip Somodevilla)

Billy Graham as a fixture in the history of civil religion means the last word will never be spoken about him. Now comes the funeral procession to further inflame the controversy that surrounds the image.

He is being treated like a national hero or head of the official religion by lying in state at the Capitol before the actual funeral at his library in North Carolina. I find that appalling, a throwback to the assumption that this nation was a Protestant preserve. As if he had risen above the religious battles to an undisputed place in the hearts of all Americans.

I cannot recall a single other instance where a member of the clergy was given that super-national elevation that has been reserved for those who have been considered epitomes of public service. Graham was many things and highly visible, but he was the servant of a partisan vision of America who equated true citizenship with a selected set of religious beliefs. Granting that image as a preacher with an outlook that flatly rejected other versions of the faith seems to me a sign of that sectarianism rather than an affirmation of the nation's faith in him as our joint spokesman.

Graham's legacy has been heavily shaped by his out-and-out preachments on behalf of Republican politics, including most famously his effort to make Richard Nixon's nefarious deeds more palatable. While many Americans fought communism, Graham made red-baiting part of his message of salvation and American righteousness. The list goes on.

For all the adulation being bestowed on Graham, his legacy is otherwise conspicuously hollow, though few are willing to say it. He had a generic sermon, the value of which is readily attested to for good reason, yet that and the wider array of his talents produced little that seems likely to shed new light on old verities. He wrote nothing that sparked theological insight, fostered greater views of social ethics or helped reconcile tensions between church and state. His accomplishment aligned closely with his mission of spreading an Americanized gospel, mingling with the rich and famous in the name of pastoral calling, and steering clear of the social protests that risked security for goals of justice. He took it as his calling to enshrine the myth of a divinely blessed America — he became a figurehead for ideals that were being eroded even as he pleaded for their sanctity.

He was essentially a good man who was magnified far beyond his capacities by influential fixers. Lying in state is testimony to their success in using him as the poster boy for moral commandments and the utter, sad emptiness of the results. Americans bought the ideals and the promises contained in the myth which were good for propping up patriotism and the "American way of life" while ignoring the deeper challenges of the Gospel itself. Over time, it seems likely that he will be extolled more for championing a "civil religion," religion in the slimmest terms, than as the spokesman for a genuine encounter between authentic Christianity and the American Dream.

If Graham had been born Catholic, he would be exposed to a very different way of understanding the Christian heritage, a more communal process that made him answerable to a wider set of criteria (for good or bad I suppose). The point is that he wouldn't have been encouraged to adopt an extreme Protestant individualism that left him solely in charge of his own definition of church, practically without restraint or common sense. Obviously, conformity to the will of the "magisterium" can pose hazards of its own, but Graham asserted that frontier revivalist's spirit of running his own show in a relative vacuum.

One of the results of that development was that Graham effectively belonged to no church but his own evangelistic association. Unlike religious leaders of other traditions, he didn't have an ecclesiastical base. He was it. When others die, they are mourned in familiar quarters where they are both public and particular in their identity. Without that, the Graham decision was to pretend he belonged to everyone equally

Read this next: Billy Graham stood tall, even when he came up short

The attempts to compare Graham as the "good cop" to his son Franklin's "bad cop" don't support a flattering legacy. Having been burned by his cooptation by power brokers, Graham warned Franklin to avoid the political entrapments he had come to regret, but then turned the revival enterprise over to him and watched him undermine much of his father's good name, by groveling at the doorstep of President Donald Trump and joining the forces of opposition to Muslims and gays.

Why didn't Billy use the lessons he professed to have learned to restrain, perhaps even remove Franklin from using the company's good name to preach divisiveness and hatred unless Franklin was voicing convictions that he himself still embedded? Why would he have let his son appear to undermine his hard-won lessons in the eyes of so many? That would not impugn the elder Graham's moral stature so much as suggest moral passivity and, if you will, a shallow legacy.

I find the Graham enshrinement in the rotunda appalling in today's ever increasing religious pluralism and in light of Graham's bruises from the past. Nothing injured Graham's reputation more than his collusion with presidents and high-ranking elected officials. The harm was explicitly acknowledged by him. I would have thought someone in the Graham entourage would have cautioned that placing Graham's coffin in the Capitol would reawaken old wounds perhaps more than rally his followers. In any case, it presents itself as a form of special treatment I find appalling.

[Ken Briggs reported on religion for Newsday and The New York Times, has contributed articles to many publications, written four books and is an instructor at Lafayette College in Easton, Pennslyvania.]