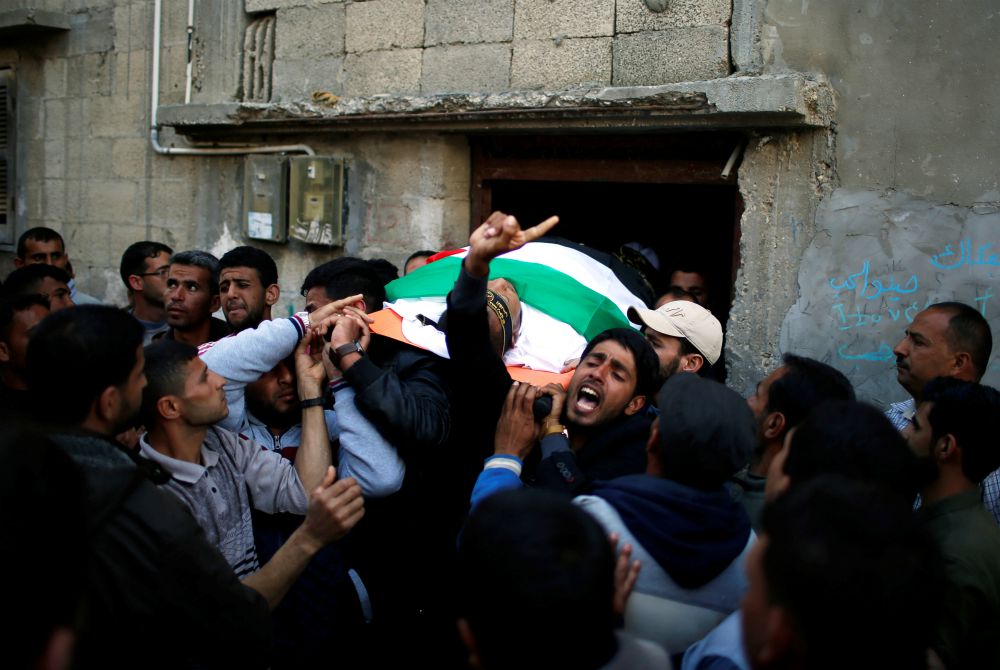 Mourners carry the body of a Palestinian man, who was killed during clashes at the Israel-Gaza border, during his April 2 funeral in Khan Younis, in the southern Gaza Strip. (CNS/Reuters/Mohammed Salem)

The Palestinians who live in Gaza have embarked on a campaign of nonviolent direct action. The last two Fridays, they have gathered after prayers at a portion of the fence, facing off the Israeli soldiers who, both days shot into the crowd, killing 20 during the first "Great Return" march and nine at the second "Burning of Tires" Friday. While the Israelis say protesters where planting explosives at the fence, it was an attack on the fence, not on the soldiers; journalists were wounded and one killed; and some protesters were shot in the back.

The protesters' demand is to be allowed to return to the homes they were driven from in 1948, and the protest culminates on May 15, the Nakba or "catastrophe" when the United Nations mandate ended and David Ben-Gurion declared Israel to be a nation. Though the protesters live in Gaza, they are protesting not under Hamas green but under the Palestinian flag.

Because I had been an observer in Northern Ireland during the July marching season for a number of years, I was invited in 2006 by the Palestinian Election Commission to observe the Palestinian elections. Hamas won by a landslide, and for about two days the observers thought Hamas would govern. But Israel immediately withheld the taxes it collects for the Palestinians, a severe punishment for their vote. The United States refused to recognize the new government. I don't remember the details exactly, but over the next month or so, the Hamas government withdrew from the West Bank and consolidated its power in Gaza, blockaded by Israel for the past 11 years. Gaza is 140 square miles holding about 1.8 million people who have little food, housing or electricity and almost no clean water.

Gandhi developed the Hindu concept of Satyagraha or carrying extra suffering in love to protest oppression. The Palestinians may not feel much love, and probably the black protesters on Pettis Bridge didn't feel much love either. Nonetheless, this nonviolent action is offering Israel — and the United States — one more opportunity to start fresh.