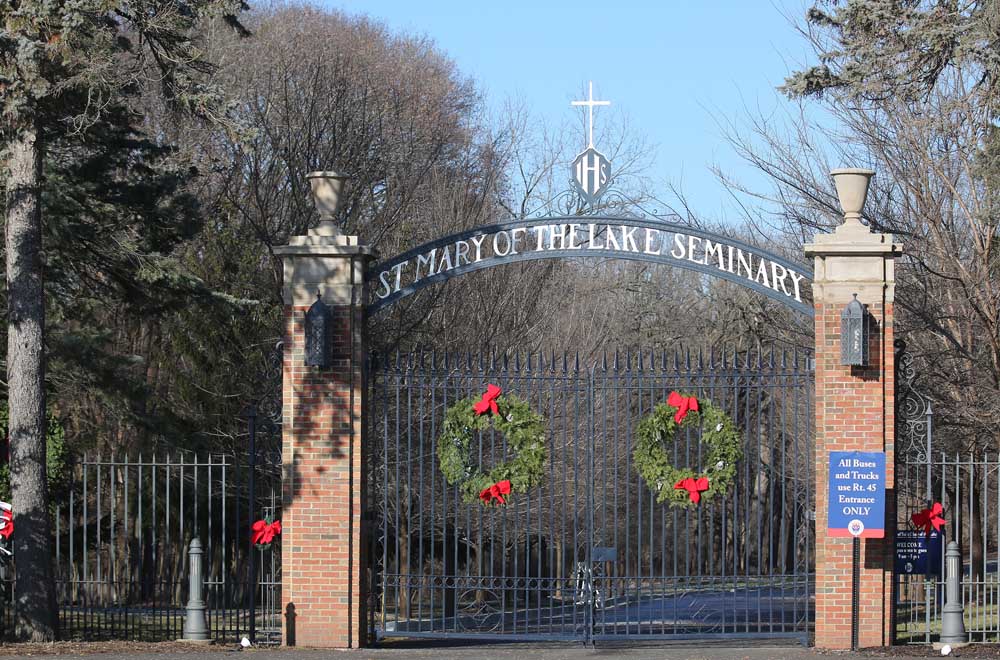 The normally open gate at the entrance to Mundelein Seminary is seen locked Jan. 3 at the University of St. Mary of the Lake in Illinois, near Chicago. (CNS/Bob Roller)

Pope Francis' personal preacher had good news for American bishops on retreat in preparation for the upcoming papal summit on church sex offenses: Despite the church being "overwhelmed" by the clergy sex abuse scandals, "and rightly so," he declared that they had emerged into a "golden age" in comparison to past times when bishops placed territorial needs over pastoral care.

That success was largely due to the refining fires of the crisis itself, said Capuchin Fr. Raniero Cantalamessa, preacher to the papal household, who spoke 11 times to the retreat at Mundelein Seminary earlier this month. At the beginning of his talks, Cantalamessa suggested it was "time for taking a break" from that preoccupation, in order to ponder "root issues" which were "both different and deeper than the issues that usually come to mind."

The ones that usually pop to mind include the continuing scourge of accusations, sanctions against hierarchical cover-up and, perhaps the toughest, a searching critique of clericalism. Cantalamessa promptly declared himself unqualified from talking about those main elements of the uproar still convulsing American Catholics. But it seems he did. Tom Roberts adroitly shows in his NCR review that all 11 messages, Cantalamessa took indirect aim, choosing to reassure bishops that nothing needed urgent repair or re-examination.

He felt their pain. The scandal had damaged their standing, reducing the bishopric from an "honor" to a "burden." He likened their suffering to that of Jesus in the garden of Gethsemane, innocent victims of the world's sins. His listeners could take comfort that their burden was inflicted by outsiders and that taking on those sins, however agonizing, served the cause of redemption.

The preacher's counsel likely sounded familiar to the bishops. It came across as inoffensive, inside-the-box advice for men who were ostensibly summoned to take a hard look at themselves from an out-of-the-box vantage point. Priests accused of sex crimes weren't singled out but melded into the general population. And the bishops were suffering servants rather than fixers of their own collusion. Cantalamessa hadn't stirred things up but had provided balm. Anyone from the inner circle might have been expected to do the same.

The "golden age" had already arrived. It didn't have to be re-conceived, only implemented as a means of extending its reach.

From a distance, however, the preacher's rosy picture of the church's condition rises to the level of a Monty Python riff on alternative reality.

Cantalamessa's impact on the gathering is guesswork, and there is good reason to believe his reception was quite mixed, but the speaker's careful avoidance of details of the unfolding disaster that brought them there, and his virtual approval of the status quo fosters skepticism that bishops can't mend themselves and raises further doubts about the pope's commitment to genuine reform.

Not only had the scandal benefit purged faulty priorities, the pope's resident priest said, but celibacy, sometimes suspected as a factor in sex abuse, remained "an integral part of our vocation" despite censure by psychologists on "materialistic and atheistic" grounds. Celibate priesthood was "a more radical way of sharing in his mission," and celibacy will always "be part of Christ's design," even though mandatory celibacy's origin wasn't "divine" and might change. Married life had its equivalent vocation, he said, but his comparison evoked the traditional privilege and unequaled status of the celibate priesthood. Supporting that privileged status might forestall a searching inspection of the celibate state that reformers believe essential.

Likewise, the Vatican messenger appeared to discourage the rising desire to enhance the laity's influence. Cantalamessa promotes lay recruitment through existing ecclesial groups but steers clear of granting laypeople a share in authority that has been reserved to the hierarchy in the interests of providing healthier leadership balance and oversight.

Most of the victims of the sexual abuse have been laypeople and that shock has raised awareness of the near total control of the church by ordained clergy. Increasing intervention by civil law enforcement sex abuse cases has awakened others to the secrecy and tight-knit insularity of that power elite. Priests and bishops essentially make the rules, enforce the rules and judge their own behavior according to their own dictates. In this country, they have never faced a challenge equal to the current abuse crisis. Prodded by the scandal, more laity are balking at their powerlessness and feeling more alienated from clergy. Nonetheless, the hierarchy may cede nothing significant and insist on minimal steps to fix itself. The preacher's words from Mundelein retreat don't hint at much else, but the drama continues.

Some promising bids have been made to explore the issues that the pope's chaplain avoided. A close inspection of seminary and clerical culture is among the most mentioned. I have previously specified in particular the inflation of the "indelible character" element in ordination. Originally defined as a unique trait invested by God at the time of consecration of the Eucharistic elements, I believe that special moment easily becomes identified with the whole of priests' lives, both by themselves and their followers. That confers a higher, God-given authority which elevates them to a level of perfection and spirituality unobtainable by the unordained, thus the tendency to place them on a pedestal where they can be idealized, their foibles overlooked. That is one aspect of attaining a privilege that encourages entitlements of various sorts, though a host of other factors contribute.

I'd prefer to think there are many bishops who took the 11 homilies with a large grain of salt and will move beyond illusions and invitations to complacency. They could still serve truth and resolve. The nagging question is whether Francis sent Cantalamessa, presumably a worthy, sincere collaborator, to convey views essentially his own, in an effort to influence the Americans?