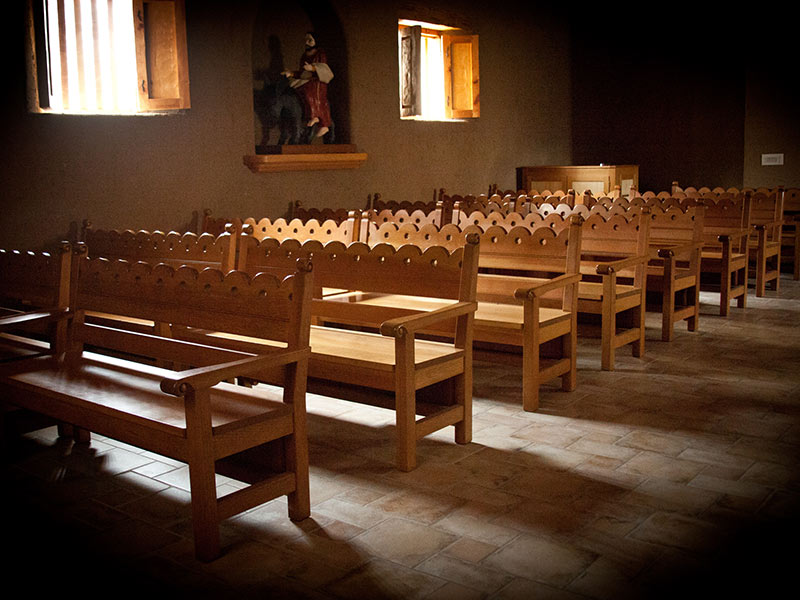 Window light shines on the empty pews of a church in Kansas City, Missouri. (RNS/Sally Morrow)

During the post-World War II days when Americans flocked to churches, I knew next to nothing about what my parents, neighbors or anyone else actually believed. It was assumed that going to church — it mattered not which — spoke for itself. We went on Sunday and that seemed enough to avoid quibbling over differences or trying to figure out what to say.

Now the pews are emptying, the churchless "nones" are on the rise, and the hunt is on for why.

Have the assumed convictions lost their grip or weren't they really there in the first place?

I suspect most in my generation can't say for sure. At that time, pressures to fit in with the social church trend conflated membership with belief, making it possible to gain what was then social favor without necessarily affirming any creeds. Evangelicals were more outspoken but not always more revealing; their open testimonies could sound more like rehearsed pledges of group solidarity than results of rigorous soul-searching.

Polls and surveys have been scratching at the surface of the shocking slide in religious participation that has taken place since the post-war church boom. Every major church is shrinking, some more rapidly than others. Congregations are folding at a growing rate and forecasts project steady decline. The pollsters, in an effort to provide clues to this startling reversal, have fastened on the degree to which the defections and lack of interest, especially acute among young people, might owe to a loss of that faith we've never known a whole lot about.

That question further swelled attention on the popular habit of describing ourselves as "spiritual but not religious." The fact that they were amorphous terms mattered less than finding a handy tool for classification. Besides, respondents seemed perfectly content to be "spiritual" as a respectably sounding way of distancing themselves from religion without having to explain what it meant. The clear-cut choice sounded substantive even though there was no proof. It's all self-reported, left to subjective free association. The language makes sense to most of us even though we have little idea what it means.

A fresh report from the Public Religion Research Institute shows further slicing and dicing of a national population once considered as a single block divided by denominational tags.

PRRI expands on recent efforts to separate "religious" (belonging to a house of worship) from "spiritual" (believing in something non-materials). Their results enlarge that binary spiritual-religious choice. In these findings, 29% were defined as both, 31% neither, 22% not spiritual but religious, and 18% spiritual but not religious. Previous surveys by a variety of pollsters had fed some church analysts' hopes that those who had stayed away from churches might still harbor spiritual longings that could eventually bring them in, but the PRRI results appear to dampen that prospect.

Altogether, 49% say they are not religious and just 18% of those attest to being spiritual. As many of the just spiritual hold with college degrees (40%) as those who claim both (39%) followed by the neither grouping (30%). Far more spiritual-only respondents are rated politically liberal (40%); 44% self-identify as politically independent, while 36% are Democrat, and 16% are Republican. That may help explain a greater movement away from the general conservative orientation of American churches.

This depiction of assorted self-definitions, shallow though it may be, nonetheless hints at vast changes in belief patterns and life purposes. Church planners wouldn't depend alone on such signs of seismic shifts in religious consciousness but they seem to detect a mounting crisis that warns against complacency. A membership drift has become a heavier outward flow. Its causes suggest a profound turnabout in the relationship between humans and religion, rather than a periodic slump in a consistent historical cycle.

Meanwhile, if you are looking for a place to comfortably park your soul, coming out as spiritual offers benefits. It's likely to mark you as open minded, accepting of difference, not involved in a church but friendly toward religion. And the PRRI people throw in a bonus. Spiritual people are said to be more willing than non-spiritual people (religious or not) to help a friend (36% to a paltry 22% of the non-spiritual) and to be considerably happier with their lives. Sounds positively upstanding.

The promise of healthier and happier dividends follows a familiar marketing strategy adopted by religious groups as a highly dubious means of promoting the self-help dividends of their tradition. Fortunately, the institute has a record of going beyond initial surveys and I expect they will on this issue because there are none more urgent to religious vitality and/or survival. We don't know much more about what people actually believe, but in the midst of dramatic religious decline, it's a forward step.

{Ken Briggs reported on religion for Newsday and The New York Times, has contributed articles to many publications, written four books and is an instructor at Lafayette College in Easton, Pennslyvania.]