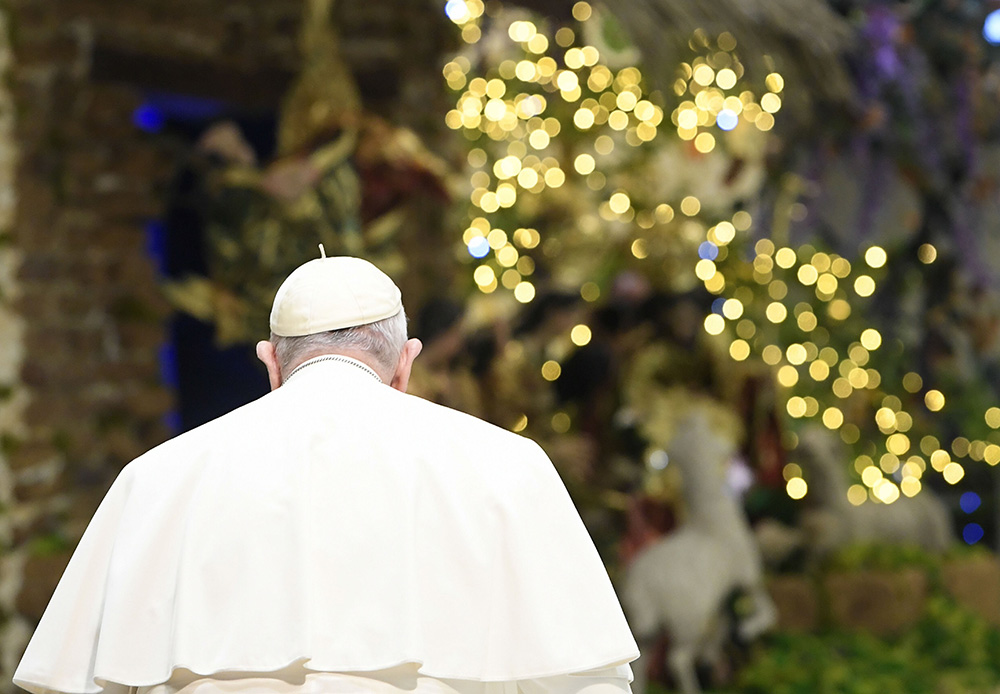 Pope Francis in the Paul VI hall at the Vatican Dec. 3, 2022 (CNS/Vatican Media)

The year 2022 in the Catholic world was dominated by significant shifts in the intellectual and ecclesial landscape, accompanied by shockingly few shifts among key personnel in the Vatican Curia and at the headquarters of the U.S. bishops' conference. Pope Francis continues to invite the church to try new approaches with the goal of retrieving our tradition more fruitfully, even while here in the United States he encounters a great deal of opposition.

Synodality was the biggest story of 2022 — or it might be. The process has begun and no one is sure how it will end, but already we are seeing signs of its effect.

As NCR board member Jim Purcell, who was heavily involved in the synodal process in his parish and diocese, noted, "I have witnessed again and again the animating power of the Holy Spirit that is at the heart of a synodal church." Again and again, people reported how nice it was to feel listened to, how for many it was the first time anyone had asked for their input.

The practice in the U.S. church for most of the 20th and early 21st centuries has been for the bishops to consult among themselves and then tell the rest of us what they concluded was for our own good. The pattern was set by Pope Pius X in his 1906 encyclical letter Vehementer Nos, in which he declared, "The one duty of the multitude is to allow themselves to be led, and, like a docile flock, to follow the Pastors." 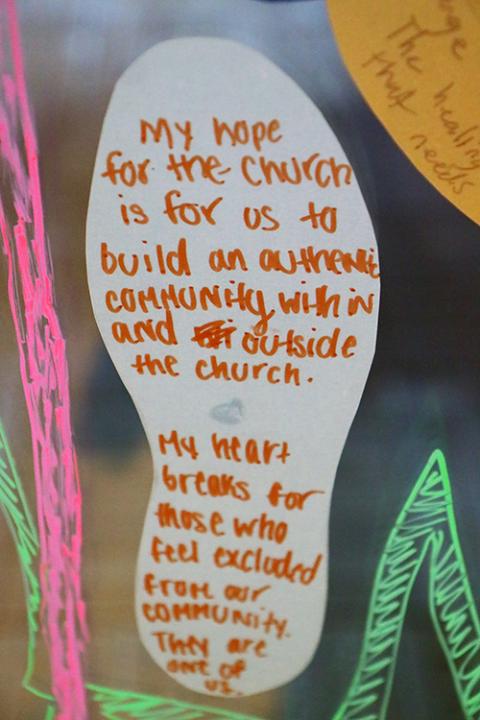 A student's message about participating in listening sessions in preparation for the 2023 world Synod of Bishops on synodality is seen April 4, 2022, at La Salle University in Philadelphia. (CNS/CatholicPhilly.com/Sarah Webb)

The funny thing is that for synodality to work, we all need to learn to be docile to the Holy Spirit, and the pastors need to learn this, too. The American penchant for pragmatism and our contemporary predilection to activism are as much a hurdle to effective synodality as is the history of exclusively hierarchic governance.

The U.S. Conference of Catholic Bishops did a fine job collating the various diocesan synodal reports, as well as the report from Region XVI, which grouped various non-diocesan lay organizations.

The final report was overseen by Bishop Daniel Flores of Brownsville, Texas, who chairs the bishops' Committee on Doctrine, and it showed: Flores is a conservative thinker with a pastoral heart, very much sympathetic with Francis but equally at home among the ideas and cultural attitudes found in prior pontificates.

It was shocking Flores did not get more votes in the November election for the bishops' conference presidency. Instead, the worst remaining remnant of the John Paul II era, a protégé of the late Cardinal Angelo Sodano, is in charge. Archbishop Timothy Broglio's election as president of the conference was dispiriting, unless you are a right-wing plutocrat like Tim Busch or conservative apparatchik like Leonard Leo. Busch recently posted a picture of him dining with both Broglio and Leo and a gaggle of other clergy at a high-end Italian restaurant in D.C. Adults are free to dine with whomever they wish, but the fact that Busch posted the picture was revealing.

At a press conference after his election, Broglio deflected questions about clergy sex abuse during his tenure as chief of cabinet to Sodano, falsely saying the accusations against Legion of Christ founder Fr. Marcial Maciel only emerged after Broglio had moved on. He left the Vatican in 2001 and the allegations were published in 1997. It will be interesting to see how Broglio handled sex abuse cases once he did move on, becoming nuncio to the Dominican Republic in 2001, and then at the U.S. military archdiocese. 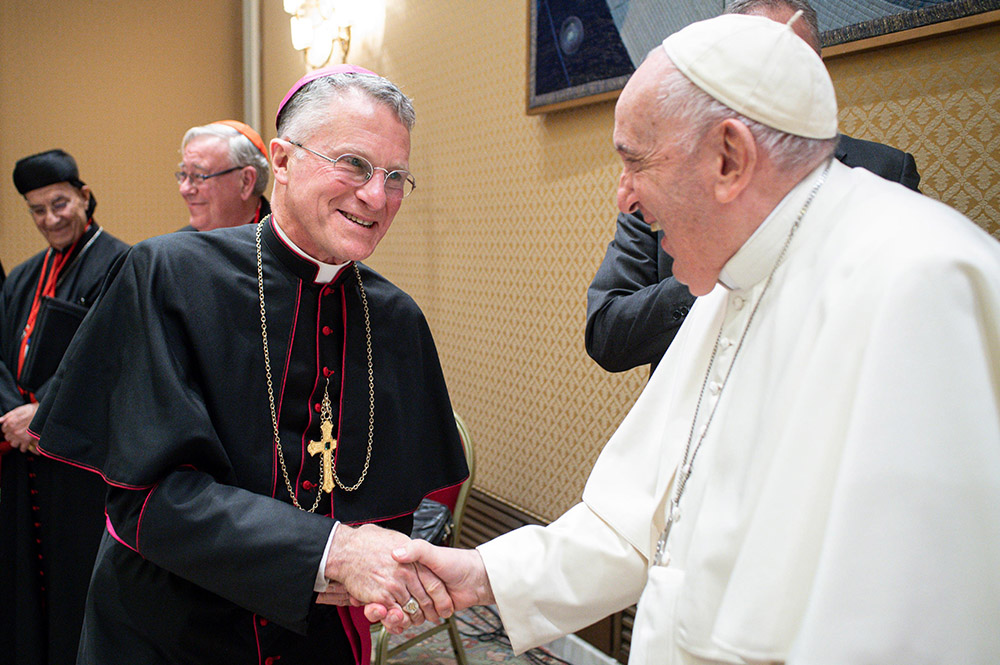 Pope Francis greets Archbishop Timothy Broglio, newly elected president of the U.S. Conference of Catholic Bishops, during a meeting with the presidents and coordinators of the regional assemblies of the Synod of Bishops at the Vatican Nov. 28, 2022. (CNS/Vatican Media)

The majority of the U.S. episcopate may be looking to the next papacy. As Australian Jesuit Fr. Bill Uren recently noted at La Croix, "Thus, the American bishops in electing Archbishop Broglio and seeming to embrace a restorationist agenda are not necessarily embracing a forlorn cause. Their fortunes and those of their Republican sponsors may be restored overnight by the election of a pope more in the mold of John Paul II or Benedict XVI than that of Pope Francis."

There are plenty of Catholics who continue to abhor Francis. He certainly has turned the world upside down for a kind of conservative Catholic who has reduced religion to ethics and thence to politics.

The most glaring examples of this came in the latter half of the year: Francis received Jesuit Fr. James Martin, known for his ministry to gay Catholics, in audience and he defrocked pro-life activist and Donald Trump apologist, now-former Fr. Frank Pavone. You could hear the heads at EWTN exploding!

This time last year, I offered the hope that "it seems that in 2022, Francis will put the pedal to the metal." Certainly, naming San Diego's Bishop Robert McElroy a cardinal showed a pope willing to send a strong signal. As I wrote last year, "Mindful of Francis' preference for the peripheries, I would expect any new American cardinal to come from a diocese that has never had a cardinal before and probably from a border diocese as well." 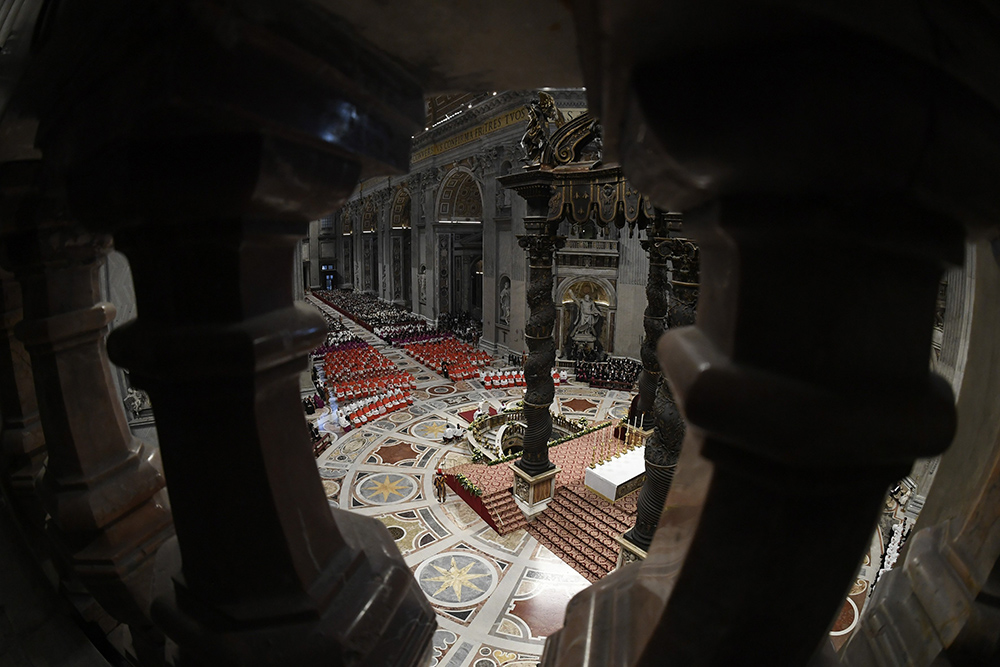 Pope Francis leads a consistory for the creation of 20 new cardinals in St. Peter's Basilica at the Vatican Aug. 27, 2022. (CNS/Vatican Media)

In other ways, Francis has not advanced his agenda in ways his champions had anticipated. Leaving Cardinal Marc Ouellet in charge of the Dicastery for Bishops is baffling. There were some excellent appointments in the U.S. church: Archbishop Shelton Fabre in Louisville, Kentucky; Bishop John Dolan in Phoenix; Bishop Jeffrey Fleming as coadjutor in Great Falls-Billings, Montana; and, just last week, two stellar auxiliary bishops in Washington, D.C., Bishop-elect Juan Esposito-Garcia and Bishop-elect Evelio Menjivar-Ayala.

Still, as the voting showed at the U.S. bishops' meeting, Team Francis is still losing by about 30 votes in key races, the same margin as in years past. In the Catholic Church, as much as in the realm of politics, personnel is policy.

Ideas matter, too, in the Catholic Church, and the most significant intellectual development in the life of the church this year was the emphatic reinstatement of just war theory as the principal Catholic moral approach to violence. When the NCR staff gathered to suggest nominees for Catholic Newsmaker of the Year, I nominated St. Augustine, the father of just war theory.

Alas, the peace activists were not prescient. Pacifism, as a theory, cannot reckon with the evil someone like Vladimir Putin can unleash. Efforts at nonviolent resistance within Ukraine are heroic, to be sure, but inadequate. Declarations about the value of pacifism from outside Ukraine are morally suspect or worse.

Francis' ambivalence about the war in Ukraine does not seem to be the consequence of a divided mind or heart, but of a divided role. The vicar of Christ cannot be championing military efforts by any nation, but in his role as a moral leader, any semblance of evenhandedness between the combatants is morally obscene.

There is no good answer to this conundrum. "War is an ugly thing," even when it is just, "but it is not the ugliest of things" as John Stuart Mill observed.

Catholic intellectual life also presents one of the biggest underreported stories of 2022: the continued drift of theology departments and confused sense of Catholic identity at many of our institutions of higher learning.

With the ending of COVID-related travel restrictions, it is again possible to visit college campuses, and every time I do, someone will approach me to complain about the culture of intellectual conformity and mediocrity on campus. Sometimes it is a student, sometimes a teacher, but the refrain is the same: Our Catholic intellectual tradition is being shunted aside. More on this in the weeks ahead. 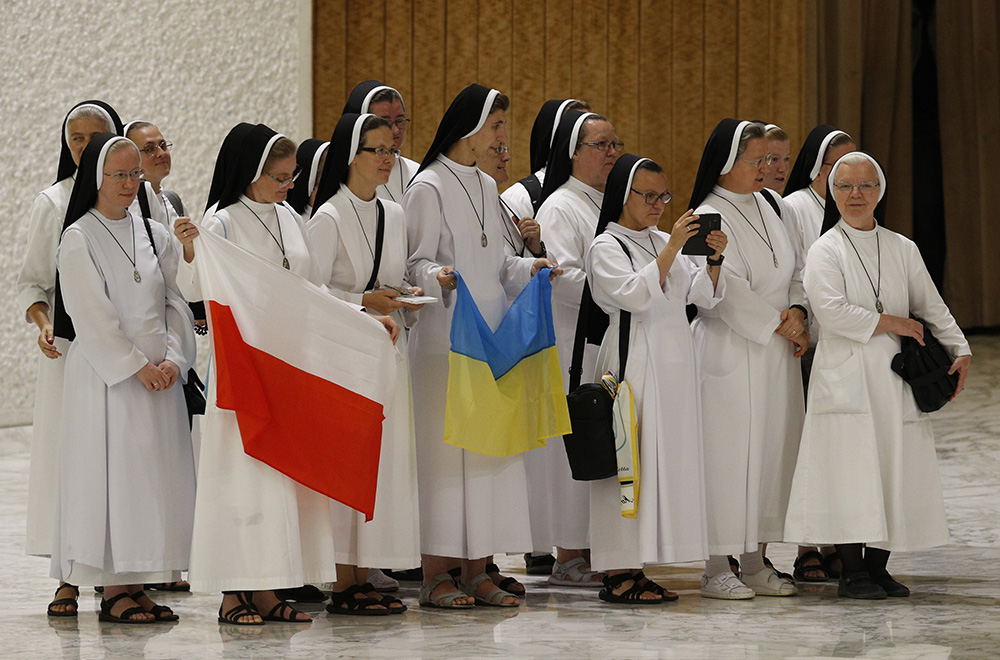 Nuns hold the national flags of Poland and Ukraine as they prepare to greet Pope Francis during his general audience in the Paul VI hall at the Vatican Aug. 3, 2022. (CNS/Paul Haring)

Let's finish on a note that is, if not exactly happier, at least more uncontroversially Catholic: 2022 has been a year when the Catholic Church as an institution stood guard at the borders of the world, attempting to restore human dignity to those forced to those borders by the violence of poverty and war.

At our national border with Mexico, Catholic Charities has been deeply engaged in meeting the humanitarian and spiritual needs of migrants. And, along the border with Ukraine, Catholic Poland rose up as one to welcome refugees from the conflict.

It was astonishing that as millions of Ukrainians reached the border in such a short time, there were no tents, no refugee camps. People opened their homes. Archbishop Borys Gudziak thanked the people and clergy of the U.S. church for their generous humanitarian support, in one of the few highlights of the November plenary U.S. bishops' meeting.

These were the ecclesial issues and stories that loomed largest in 2022. Wednesday, I will look back at the year in politics and at the estuary where politics and religion intersect.