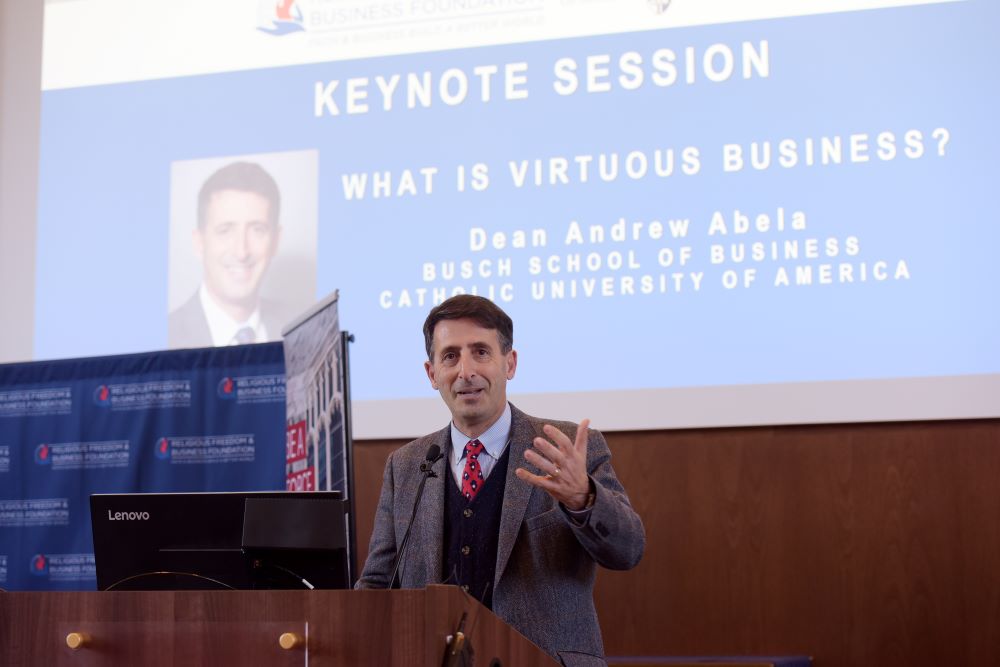 I have already undertaken two columns on the U.S. bishops' national synthesis of synodal reports, the first praising the synthesis for its candor and comprehensiveness, and the other focusing on the need to move forward by engendering an ad extra focus, mindful of Pope Francis' insight that a self-referential church becomes ill.

This second column generated some interesting conversations that now require me to dive back into the topic. Specifically, the synthesis states: "Synodal consultations acknowledged that 'the Church needs to help parishioners understand the connection between Catholic social teaching and outreach beyond the borders of the parish.' "

The question that arose in conversations with other Catholic observers is this: Can Catholic social teaching unite the church in the United States or not?

The short answer is: No. For a variety of reasons, at least in this country, Catholic social teaching cannot yet be a source of ecclesial unity. Why?

The first is that a group of conservative thinkers have been trying to rewrite Catholic social teachings in a different, more neoliberal manner. Starting with Michael Novak's The Spirit of Democratic Capitalism, through Fr. Richard John Neuhaus' founding of  the magazine First Things and the tendentious effort by both men in concert with George Weigel to summarize the Pope John Paul II teachings in Centesimus Annus, the neocons minimized the many and repeated cautions papal and conciliar teaching delivered against capitalism and highlighted the conditional endorsements of private property without mentioning the conditions. Weigel's bizarre analysis of Pope Benedict's Caritas in Veritate — he suggested ignoring the parts of the encyclical with which he disagreed — represented the high water mark of neocon hubris.

Massimo Borghese's magnificent book Catholic Discordance, which I reviewed, details the distortions these three men perpetrated on the teachings of John Paul II and Benedict XVI. Yet how many diocesan newspapers continue to publish Weigel's columns? Anyone want to give odds on how many bishops read Weigel's biography of John Paul II compared to Borghese's carefully argued book?

The bishops' own university, the Catholic University of America, goes beyond even the distortions of the neocons, aligning itself with the Napa Institute in founding a business school where full-blown libertarian economics is celebrated.

The second reason Catholic social teaching can't unite Catholics in the U.S. is that our politics tends to define our identities and shape our ideas more than our religion. This has happened among both liberal and conservative Catholics, and it grew from an understandable and even laudable effort by our forebears to assimilate to mainstream U.S. culture. They succeeded a little too well, imbibing Protestant ideas about religion being a private thing and liberal ideas about a putative neutral public square.

How many times, in casual conversation, say with someone seated next to you on an airplane or at a town meeting, have you heard someone say, "You can’t legislate morality"? All legislation is, in some sense, a legislation of morality. How many times does a Catholic articulate a position in which she makes no reference to any received dogma, but her argument is still dismissed because "You can’t mix religion with politics"?

The New York Times has long practiced a low-wattage anti-Catholic bigotry that now manifests itself in the paper’s propensity to publish only those Catholics who fit their caricature of a Catholic in the public square.

And, now, due to the exodus of liberal Catholics, those who worship at Sunday Mass are increasingly likely to subscribe to a political gospel that has little in common with Catholic social teaching.

Nor are the people in the pews likely to hear a sermon about Catholic social teaching, which is the third reason it can't serve to unite us. Most young priests know little about Catholic social teaching, have trouble relating it to the Sunday readings, and are inclined to select catechetical materials that emphasize charity but not justice, and sexual not economic morality.

Now, to be clear, Catholic social teaching can and should help Catholics discern how to engage in the kind of ad extra engagement the church needs. It can and should show us how to engage the world. But, starting with our theology schools and our bishops, we need to connect the dots for our seminarians and for the people in the pews.

The place to start is charity. Here is something that really does unite Catholics. Biden voters and Trump voters all line up to support the charitable work of the church. Charity, however, is not the same as justice. In the common sense of the word, charity is insufficient. In the theological virtue sense of the word, charity goes beyond justice. Maybe the people collecting bottles and cans for the parish Boy Scouts don't connect their activity with their theology, but that is why God invented preachers.

Second, Catholic social teaching must be presented as one kind of moral teaching, every bit as rooted in our doctrinal and scriptural traditions as other areas of moral teaching. It should be related to other teachings.

Third, we need to develop our tradition of Catholic social teaching. It is exceedingly rich when it comes to analyzing issues of economic justice, but is far less developed when it comes to politics. The starting place is obvious: the three documents of Vatican II — Gaudium et spes, Dignitatis humanae and Nostra Aetate — which repudiated the hostility to modernity evidenced in the Syllabus of Errors. In them we see the seeds of a coherent theology of politics, one that provides a distinctly Catholic understanding of concepts such as rights, democracy and pluralism.

Finally, we need to admit the limits of Catholic social teaching. The quest for justice is, as the 1971 synod of bishops taught, constitutive of proclaiming the Gospel. But in front of the dead bodies in Ukraine, our Gospel has more to say than that their deaths were unjust. The promise of the resurrection, not the promise of societal reform, is the heart of the Gospel, especially in such moments. The truth is we humans fight for justice in every generation and the struggle seems endless. The "prince of peace" has evidently not brought peace to the world.

In the first book of his beautiful trilogy on Jesus of Nazareth, Pope Benedict XVI wrote:

The great question that will be with us throughout this entire book: What did Jesus actually bring if not world peace, universal prosperity, and a better world? What has he brought? The answer is very simple: God. He has brought God. He has brought the God who formerly unveiled his countenance gradually, first to Abraham, then to Moses and the Prophets, and then in the Wisdom Literature — the God who revealed his face only in Israel, even though he was honored among the pagans in various shadowy guises. It is this God, the God of Abraham, Isaac, and Jacob, the true God, whom he has brought to the nations of the earth. He has brought God, and know we know his face, now we can call upon him. Now we know the path that we human beings have to take in this world. Jesus has brought God and with God the truth about our origin and destiny: faith, hope and love.

Our great tradition of Catholic social teaching must be seen to be derivative from this faith in the person of Jesus, or else we risk becoming an NGO with hymnody. If the people in the pews are to believe in Catholic social teaching, and believe enough that they are willing to challenge the ambient political culture, that teaching must be rooted in this path of faith, hope and love. It must be seen to come forth with Jesus from the now empty tomb. Then, and only then, will it become a source of unity with the Catholic Church in the United States.