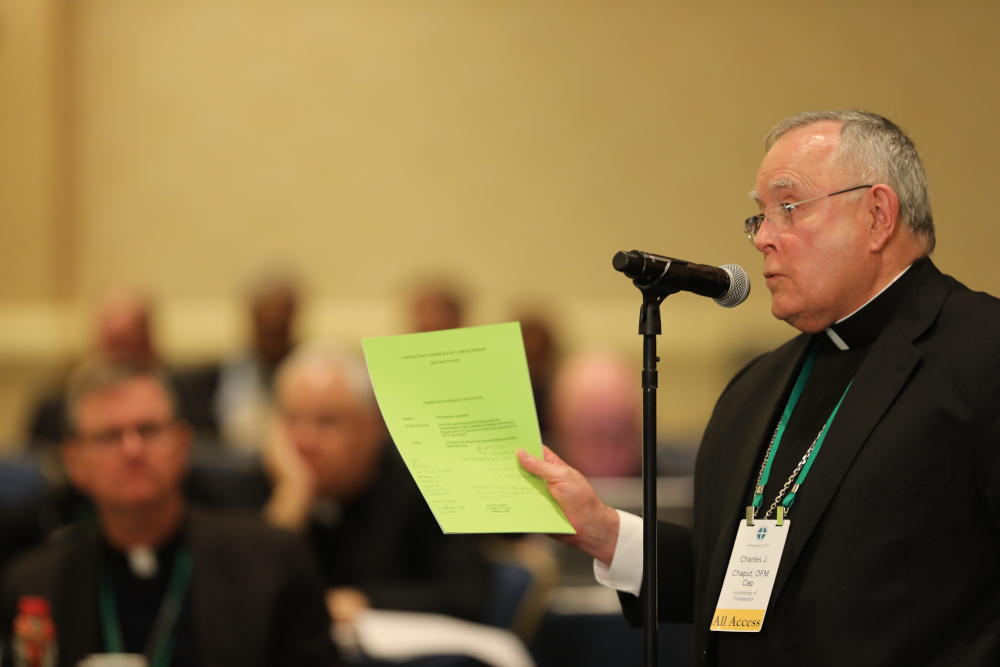 Retired Philadelphia Archbishop Charles Chaput speaks from the floor during the fall general assembly of the U.S. Conference of Catholic Bishops in Baltimore in November 2019. (CNS photo/Bob Roller)

Archbishop Charles Chaput, the former archbishop of Philadelphia, is drawn to controversy as a moth is drawn to the flame. He has been out of office for two years and still, come election time, he can't help himself. Chaput is to the Catholic world what John Foster Dulles was to postwar diplomacy, the "only bull who carries his own china shop with him."

Last weekend, speaking at a Eucharistic Symposium in Arlington, Virginia, conveniently in the Washington media market, Chaput talked about the ways our consumer culture dulls us to the enormity of the miracle at the heart of our Eucharistic celebration. Much of what he said was incontrovertible, albeit, always in a glass half-empty kind of way. Chaput's talks are always a bit of a downer.

Turning to the idea we Catholics assimilated too much to the mainstream culture, that "we've been digested and bleached out by the culture," he decided to go after the president.

"Mr. Biden's apostasy on the abortion issue is only the most repugnant example. He's not alone. But in a sane world, his unique public leadership would make — or should make — public consequences unavoidable," Chaput said. "When you freely break communion with the Church of Jesus Christ and her teachings, you can't pretend to be in communion when it's convenient. That's a form of lying. Mr. Biden is not in communion with the Catholic faith. And any priest who now provides Communion to the president participates in his hypocrisy."

There are some large assumptions and mistakes in those sentences. First, apostasy, the renunciation of a belief, is not really the correct category for analyzing the moral significance of a public policy, certainly not standing alone. Second, you can't "break communion" with a teaching, only with a person. Third, while I agree that the president is wrong about the relationship of morality and law as it pertains to the issue of abortion, I do not think he is "lying" and do not know how the archbishop has such assurance that he is. Fourth, as the country is learning, there is a big difference between being opposed to abortion and figuring out how to write a law that limits it, none of which Chaput bothers to consider before passing judgment on the president.

Now, let's set aside the fact that this talk was given on the eve of last Sunday's Gospel from Luke, in which the Pharisee prayed "I thank thee Lord that I am not like other men."

The real issue is that Chaput is insulting the vast majority of bishops in the United States who do not subscribe to Chaput's position on denying Communion on the basis of public policy issues, to say nothing of bishops around the world who scratch their head at this bizarre American idea. They chose to leave this intensely pastoral issue of confronting Catholic politicians whose public stances conflict with church teaching to the local bishop. What does Chaput know about the president's relationship with his local pastor?

Chaput is also, therefore, insulting Washington Cardinal Wilton Gregory, who has explained why he does not deny Communion to politicians based on their public policy positions, which is that he does not wish to politicize the Communion rail.

Finally, of course, Chaput is insulting the Holy Father who reportedly told Biden he is a good Catholic and should continue to go to Communion. The Holy Father also made a point of saying he has never denied Communion to anyone, and the Congregation for the Doctrine of the Faith has urged the U.S. bishops to consult with other episcopal conferences about the practice.

It is Chaput, as much as Biden, who is breaking communion with his fellow Catholics. It is Chaput who is creating division within the church.

It is hard to know if Chaput has become an avatar of the spirit of pre-Vatican II, in the mold of Cardinal Raymond Burke, or if he has simply become a political hack, a child of Jerry Falwell in Catholic garb. Or both. It is pathetic no matter which way you cut it.

Chaput's stance also involves a dis-Incarnation. He no longer loves the church that exists, the church of sinners. He pines for a church of his own imagining in which Communion is a reward for good behavior.

It is strange to see this fantasy on the right. In the post-conciliar era, it has been the left that has tend to invoke some imagined church to criticize the church as it actually exists. In his "last lecture," Boston College theology professor Richard Gaillardetz noted, "Today the term 'institutional church' carries largely pejorative connotations, associated as it is with every form of ecclesiastical dysfunction. The many flaws and failings of the institutional church are often set in opposition to some more idealized ecclesial vision. This tendency is in keeping with a broader anti-institutional bias in our culture."

Catholics cannot share this anti-institutional bias in any meaningful way without somehow forgetting that Christ remains present in his church. This does not mean we do not make mistakes. It does not mean the church is morally pure or free from error, even gross errors. It means that Catholics have to place belonging and inclusion high on the list of ecclesiological values, right alongside moral truths such as the need to protect innocent human life from any and all threats. This is what Chaput misses.

In that same lecture, Gaillardetz quoted the liturgical scholar Romano Guardini, who had a profound influence on Pope Francis too. Guardini wrote:

being Catholic means to affirm the church as it is, together with her tragedy…. This, of course presupposes that we have the courage to endure a state of permanent dissatisfaction. The more deeply a [person] realizes what God is, the loftier [their] vision of Christ and his Kingdom, the more keenly will they suffer from the imperfection of the church. … There is no place for a church of aesthetes, an artificial construction of philosophers…The church [we need] is a church of human beings.

Archbishop Chaput's attempt to try and punch Joe Biden in the nose just before the election shows only his unwillingness to "suffer from the imperfection of the church." Instead, he makes the rest of us suffer his imperfect and divisive ecclesiology. Won't someone tell him to keep quiet?