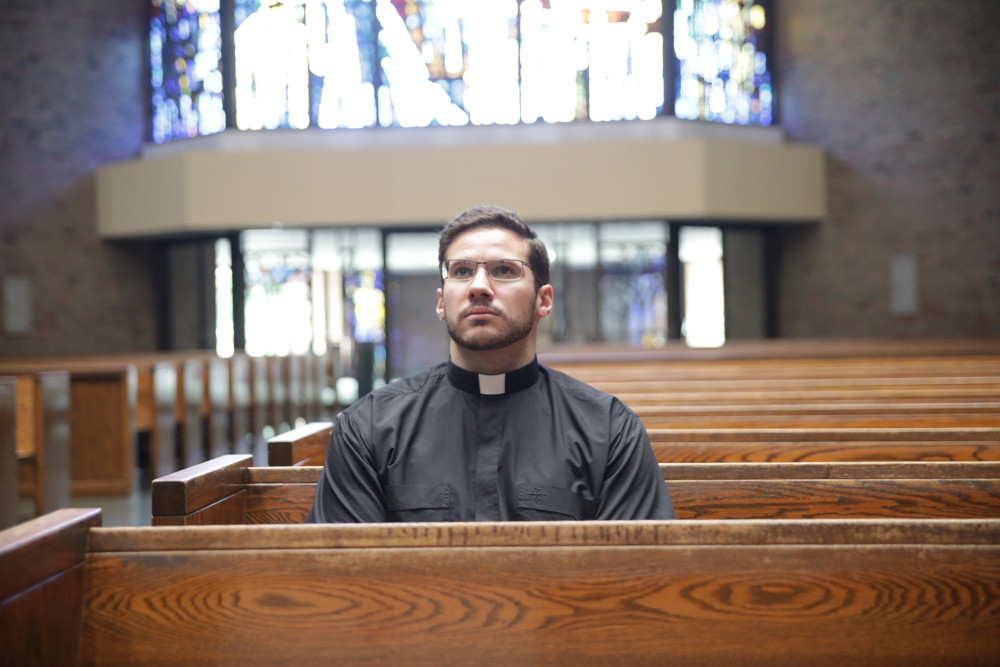 Deacon Jeremy Schupbach, a fourth-year seminarian who was assigned to St. Frances Cabrini Parish in Allen Park, Michigan, for the summer, sits in contemplation at the parish church July 27. (CNS/Detroit Catholic/Dan Meloy)

Sixty years ago, about a month after I entered the Jesuit novitiate in Los Gatos, California, the Second Vatican Council opened in Rome. No one bothered to tell the novices about it. The council went on for three years, during which I took vows and studied Latin and Greek without knowing what was happening at the council.

In those pre-Vatican II days, the novitiate was what sociologists call a "total institution," completely isolated from the rest of the world, with no access to newspapers, radio or television. Except when I went to the dentist, I did not talk to a woman outside my family for four years. The idea was to insulate us from the world so we could devote ourselves to our Jesuit formation.

For example, we were on retreat during the Cuban missile crisis, and no one bothered to tell us what was happening. During one break in our studies, I found a discarded copy of U.S. News & World Report and read it from cover to cover before I realized it was a year old.

Somehow, I don't remember how, I heard the council had issued documents. Together with a classmate, I went to the rector of the house and asked if we could have copies of the documents of Vatican II. He said he would have to think about it and consult with some of the faculty.

They finally decided the two of us could have copies of the documents, but they would not be made generally available to our classmates. A month later, they were mandatory reading for everyone.

The rector was a wonderful man and a Shakespearian scholar who could recite hundreds of lines of Shakespeare from memory. The faculty were Latin and Greek scholars. They were totally out of touch with the modern world.

I relate this history to show how unprepared even many Jesuits were for the changes that would come because of the council. We had spent four years going to daily Mass in Latin and never expected to see the Mass in English. We were taught the church was perfect and did not need to change.

After four years of isolation in Los Gatos, I went to St. Louis University to study philosophy, and all hell broke loose. The Mass went into English, and we began receiving from the cup. Meanwhile the world was in chaos with war in Vietnam and racial conflict at home. Being on campus, we could no longer be isolated from the world.

Those in charge of Jesuit formation provided little guidance because they did not understand what was happening either. It became difficult to see superiors as the voice of God when they were so clearly out of it.

After about five years, things eventually settled down; superiors were appointed who understood Vatican II. But the transition was tough. You felt like you were holding on to your vocation with your fingernails and with no safety net below. Many left.

I relate this history because, sadly, many seminarians and young priests have been going through the same transition again. During the papacies of John Paul and Benedict, diocesan seminaries returned to the pre-Vatican II model of isolation from the world. They were again told the church had all the answers, and it was their job when they became priests to whip the laity into shape. They have even been taught to love the old Latin Mass.

Then Francis came along and, like John XXIII, opened the windows to let fresh air into the church. Sadly, the people running the diocesan seminaries were as unprepared for Francis as mine were for Vatican II. Their bishops were as out of it as were my superiors.

Once again, religious orders were quicker to embrace change under Francis than were dioceses.