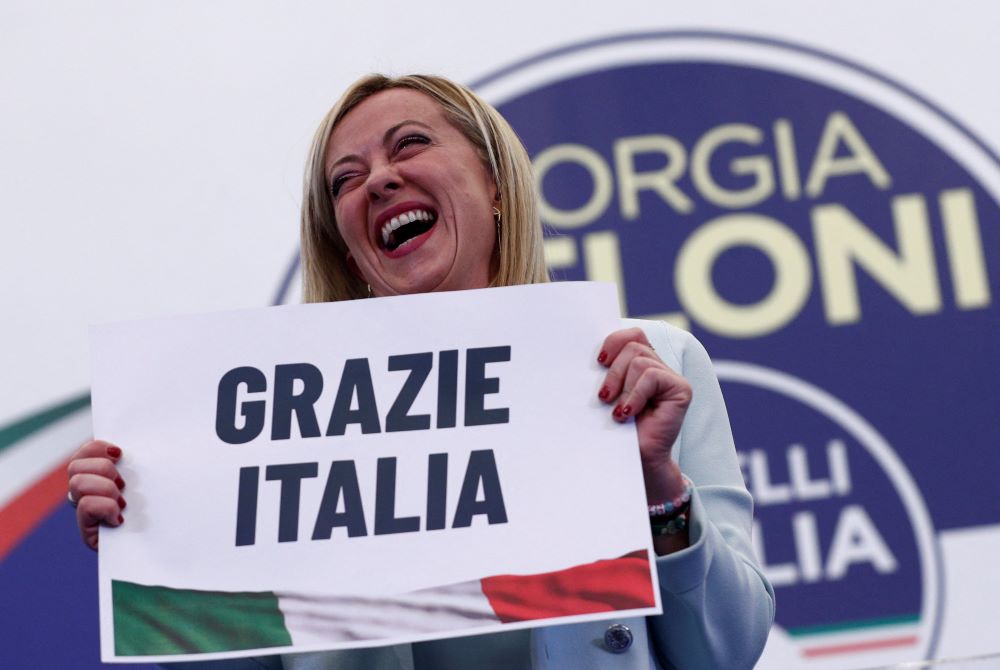 Giorgia Meloni, leader of Brothers of Italy, holds a sign at the party's election night headquarters in Rome Sept. 26. Italian voters handed a victory to a coalition of center-right parties and set the stage for Meloni to become the next prime minister. (CNS/Reuters/Guglielmo Mangiapane)

The Italian elections produced a victory for hard-right candidate Giorgia Meloni, whose party has its roots in post-Mussolini fascist politics. This result has rightly generated consternation about what this means not just for Italy, but for Europe and the West more generally.

After World War II, the Italian Social Movement tried to keep the flame of fascism alive, but it was small and powerless. It morphed over the years — changing names, confronting some of the evil of fascism by having party leaders visit Yad Vashem in Jerusalem and denouncing the Holocaust, and shedding some of its extremism. Meloni, who grew up in the movement and was a movement activist in her youth, changed it further, christening a new party, Brothers of Italy, in 2011.

Is she a fascist? Does her election hold dangerous potential for an alliance with right-wing governments in Hungary and Poland? Or with a United States led again by Donald Trump or a Trump wannabe?

And what role does religion play in all this? Mussolini looked back to the glories of pagan Rome for inspiration, but Meloni invokes the Christian roots of Europe in justifying her opposition to migration and gay rights.

"There are key differences between her and the alt-right or even GOP conservative U.S. Catholics," says Villanova theology professor Massimo Faggioli, an Italian who lives in the U.S.

"The first is the basic acceptance by all Italian Catholics of the distinction between the religious and political spheres," said Faggioli. "For example, Meloni preaches about God and family, but she is not married to the man she has been living with and for many years. Other leaders of the right in Italy are in the exact same situation or worse. They campaign to cultural Catholics but have no interest in Catholic moralization campaigns."

Faggioli also does not think Meloni would find many soldiers prepared to fight a full-on culture war.

"She knows that in Italy the pro-life movement has always had a very limited appeal even in the Church and in the right-wing political culture, a very small niche, in part because of the more consensual way in which abortion was legalized," he told me via email. No one has ever accused Italian culture of being puritanical. Salem is a city in Massachusetts, not Tuscany.

Julia Young, associate professor of history at the Catholic University of America, told me in an email:

In 1940s Mexico, there was a significant strain of Christian nationalism that was quite right-wing, and some groups of Catholic activists — such as the Sinarquistas — openly admired Franco, Hitler and Mussolini. By the 1970s, however, a significant progressive wing had developed as well, with liberationist Catholic activists working to shift the focus of the institutional Church away from right-wing nationalist visions and toward Mexico's indigenous communities and the needs of the poor.

Christians are called to political engagement, but such engagement often descends into political complicity. Certainly, the Catholic faith has helped sustain the political, not the partisan, identity of oppressed peoples — in Ireland and Poland, for example. I can't think of an episode in which the benefit runs the other way, when the Catholic faith benefited from its association with a political party.

Jason Blakely, an associate professor of politics at Pepperdine University, told me that nationalism as an ideology "is in very tense philosophical relationship with Christianity."

"This is partly because Christianity calls for universal belonging and solidarity, whereas nationalisms very frequently devolve into ethnic exclusions," Blakely said.

"But it is also because nationalism's idealization of collective identity into a kind of spirit or geist often supplants worship of a Christ who calls out people from all nations, with a group identity that receives privileged status," he continued. "Although it is not always the case, nationalism in practice often involves a kind of collective self-deification. The Holy Spirit is then eclipsed by the Spirit of the Nation or Ethnic group." 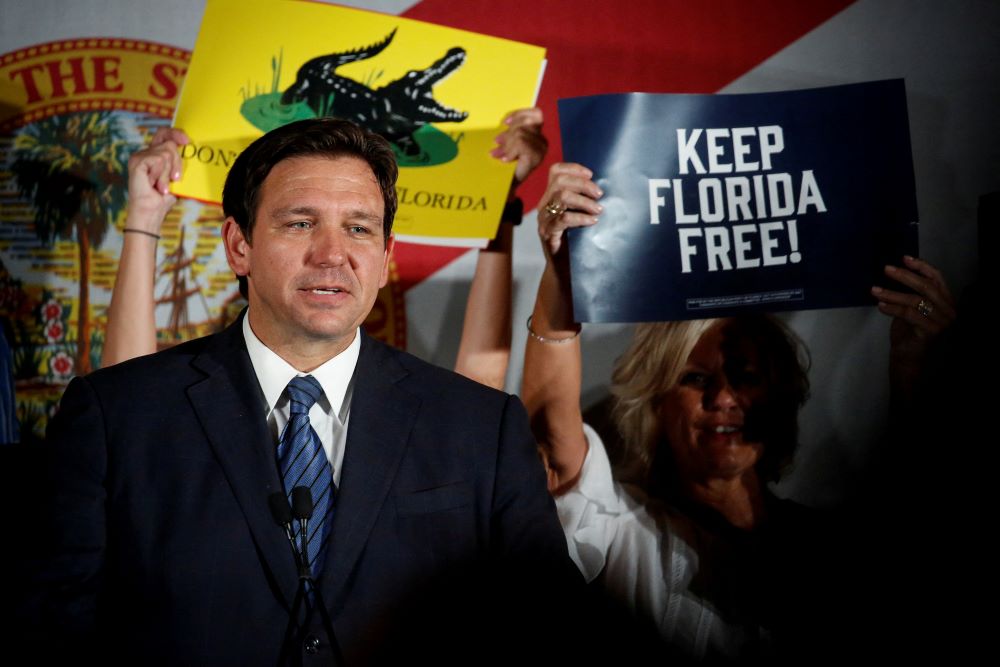 Florida Gov. Ron DeSantis pauses as he speaks at the Republican Party of Florida Night Watch Party during the primary election, in Hialeah, Florida, in this Aug. 23 file photo. (CNS/Reuters/Marco Bello)

Blakely's points are all well taken and one points to something Faggioli noted: Meloni is not very religious herself. She invokes Catholicism but doesn't appear to live it. Neither was Trump religious, even though he painted himself as a champion for Christian causes. Famously, when asked if he had asked God for forgiveness, Trump replied: "I am not sure I have. I just go on and try to do a better job from there. I don't think so. I think if I do something wrong, I think, I just try and make it right. I don't bring God into that picture. I don't."

Florida Gov. Ron DeSantis and Ohio GOP Senate candidate J.D. Vance exemplify the pattern as well, speaking and acting without a hint of Christian charity while invoking their religious bona fides in the fanciful Fox News version of the war on religion.

These conservative politicians do not embrace Christianity qua Christianity, still less its social ethics. They embrace its mythic role in a premodern or future anti-modern civic consciousness. For them, religion is a prop, not a prod.

They and their movements resemble nothing so much as the Action francaise, the hard right French political movement in the early 20th century that championed antisemitism and authoritarian, anti-democratic government, laying the intellectual and popular foundation for the collaborationist Vichy regime. Action francaise invoked Catholicism as an enemy of 1789 and all that the Revolution stood for, but didn't realize, or didn't care, that they were making a golden calf of national identity and ignoring basic social teachings of the faith. Pope Pius XI condemned Action francaise in 1926.

It is not Pope Francis' style to issue condemnations in the manner of previous popes. But if he were ever so inclined …