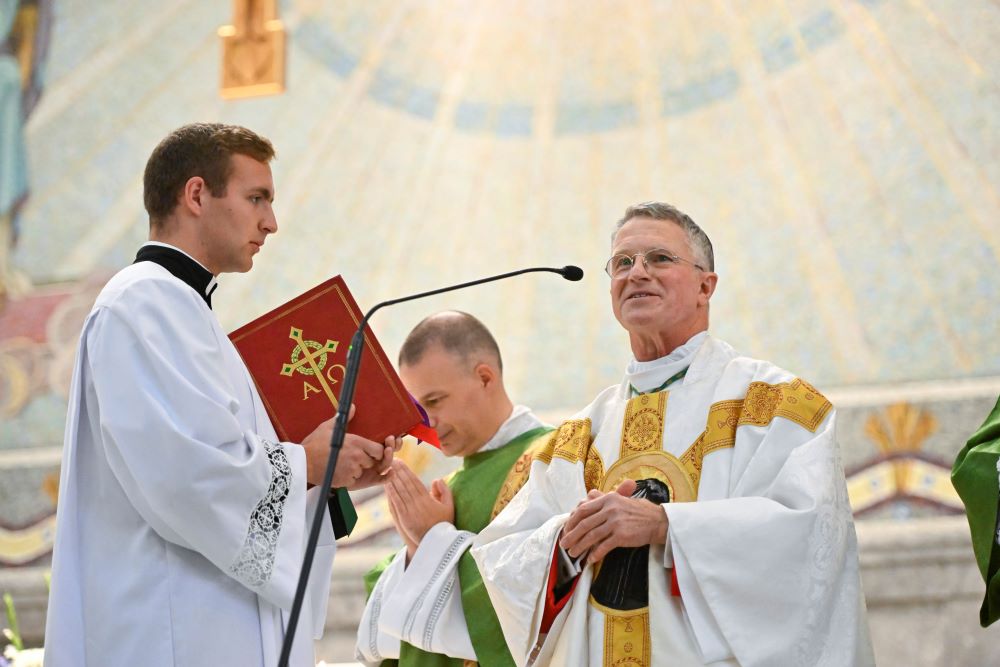 Archbishop Timothy P. Broglio of the U.S. Archdiocese for the Military Services celebrates the annual Sea Services Pilgrimage Mass at the National Shrine of St. Elizabeth Ann Seton in Emmitsburg, Md., Oct. 2. He was elected president of the U.S. Conference of Catholic Bishops Nov. 15 during the group's fall general assembly in Baltimore. (CNS/Jason Minick, courtesy of Devine Partners)

If you thought my analysis of Archbishop Timothy Broglio, the new president of the U.S. bishops' conference, was too harsh, check out this headline at Religion Digital, the Spanish-language website that highlights religion news: Broglio y los suyos, enemigos declarados y públicos del Papa Francisco, "Broglio and his followers, declared and public enemies of Pope Francis."

David Schindler, first editor of the North American edition of Communio, died last week at the age of 79. There are not many books that I can say changed my life but Schindler's Heart of the World, Center of the Church: Communio Ecclesiology, Liberalism and Liberation is one that did. A Balthasarian critique of the neoliberal Catholic ideas peddled by Michael Novak, Richard John Neuhaus and George Weigel, Schindler's work opened my eyes to the way anthropology, Christology and ecclesiology all have to be in some kind of coherent relationship with one another and, consequently, why so many critiques of neoliberalism from the left seemed more partisan than profound. I did not know Schindler well, but always enjoyed the conversations we shared. I am sure Henri de Lubac and Hans Urs von Balthasar were waiting to welcome him at the pearly gates. Joan Desmond, senior editor at the National Catholic Register, has a tremendous tribute to him.

The journalistic world also lost a giant last week, when Michael Gerson died of cancer at age 58. An evangelical Christian, Gerson wrote columns that displayed not only moral seriousness, but a religious depth that was as brilliant as it is uncommon. If his literary and intellectual gifts were not enough of a legacy, when he served as President George W. Bush's speechwriter, he also helped convince the president to launch PEPFAR, the anti-AIDS initiative that saved 20 million lives in Africa. I shall miss reading his columns enormously. At the Washington Post, deputy editorial page editor and columnist Karen Tumulty has a beautiful tribute.

Politico reports that pro-life groups are angry at Republicans for not campaigning more aggressively on the issue of restricting abortion. Just as pro-choice groups claimed credit for Democratic wins, even though the results were uneven, pro-life groups need to do the same. These advocacy groups live to perpetuate the culture wars, not to find political compromises. Republicans backtracking on abortion was the most predictable outcome of the overturning of Roe. No one should be surprised.

Deseret News reports on a bipartisan religious liberty amendment to the same-sex marriage bill being debated in the U.S. Senate. The Church of Jesus Christ of Latter-Day Saints and the organization that represents Orthodox rabbis, both which state they will never alter their teaching that marriage is between a man and a woman, have endorsed the compromise. The U.S. Catholic bishops? You guessed it. They remain opposed.

In the Washington Post, the inimitable columnist Dana Milbank looks at the incoming GOP leadership in the House and predicts, accurately, that the crazy caucus will be running the show. Of course, crazies can do a lot of damage. Rep. Marjorie Taylor Greene has announced her intention to propose cutting off all funds to Ukraine. At least she is consistent: She is uninterested in protecting democracy there or here.

At CNBC, a look at the most recent protest by environmental activists in which they poured a black, oily liquid on a painting by Gustav Klimt's "Death and Life" at the Leopold Museum in Vienna. One of the protesters then glued his hand to the painting's frame. These nihilists fail to see that culture is as vital to a people as climate. I hope the judges who hear their cases throw the book at them.

Today is the anniversary of the 1963 assassination of President John F. Kennedy, a day that shook the nation to its core. The funeral at St. Matthew's Cathedral gave many Americans their first glimpse of a Catholic Mass. If you think the pre-conciliar liturgy was edifying, look at the video. This was a low requiem Mass with a paid choir, led by a cardinal and yet it is so bizarre to our post-conciliar sensibilities because the prayers of the Mass are completely unintelligible, even if you know Latin!