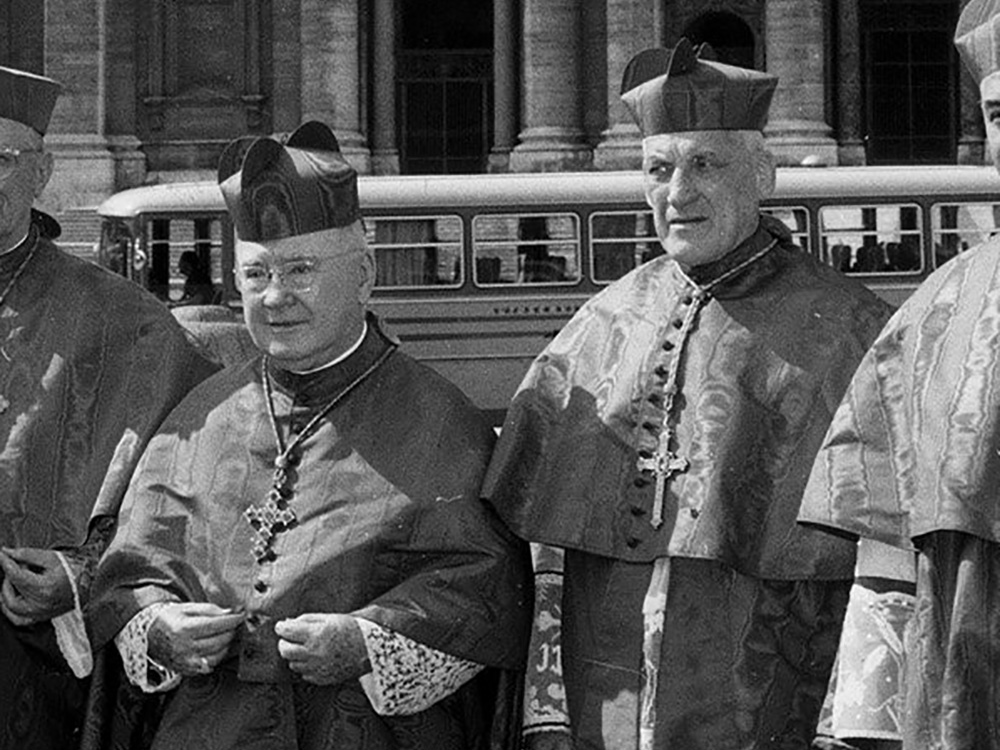 Catholic News Service has done a wonderful thing, collecting commentary from those who participated in the Second Vatican Council and producing a 48-minute video. My favorite story came from Cardinal Paul Poupard, who had been a theological adviser at the council. He recalled someone approaching Boston Cardinal Richard Cushing, "who was known to have a knack for scaring up money." They asked him to pay for simultaneous translation so people could understand New York Cardinal Francis Spellman. Cushing reportedly replied, "It's not worth it; we don't understand him even when he's speaking American."

Not every day I get to recommend an article at EWTN's National Catholic Register, but Carlo Lancellotti of the College of Staten Island has a wonderful reflection on a key spiritual insight he draws from the late Fr. Luigi Giussani, one we all should recognize as we proceed down the path of synodality. We do not overcome differences by finding a compromise, but instead we overcome polarization by going deeper, until we find common ground in the "event" of Jesus Christ.

This week, after the conclusion of this bruising political fight we call the midterms, the 26th annual Festival of Faiths will kick off in Louisville, Kentucky. This year's theme is "Sacred Stories: Contemplation and Connection" and many of the talks will be livestreamed. To learn more, go to its website.

From "Go, Rebuild My House," the church reform blog published by Sacred Heart University, David Gibson, director of the Center on Religion and Culture at Fordham University, tackles some of the conservative critiques of the synodal process.

The Washington Post's Ruth Marcus, deputy editorial page editor, writes about "The tragedy of John Roberts," cataloging the myriad ways the chief justice of the United States is no longer leading "the Roberts court" in any meaningful way. The three justices appointed by Donald Trump have pulled the court to the right of the very conservative chief justice. Marcus musters more sympathy for Roberts than I do: His rulings on guns, voting and labor issues turned me into an opponent, no matter how much he now complains about the need to protect the integrity of the court.

"A deluge of radio spots and mailers targeting transgender children is hitting swing-state voters as part of a broad ad campaign directed by prominent Trump administration alums," begins a news story at Politico. Except the ads do not target children. They target politicians and LGBT activists who insist that no one question the advisability of allowing teenagers to make decisions that are biologically irrevocable. I understand that this kind of reductionistic thinking is prevalent in academic circles. But it has no place in a newsmagazine.

Relatedly, on "60 Minutes," Bill Whitaker had a great segment on the way social media rewards extreme positions. Much of this is on the right, and it is ugly, but the episode that stood out involved Ronald Sullivan, a Black Harvard law professor who was hounded from his post as academic dean of Winthrop House after he joined Harvey Weinstein's legal defense team. Here was a teaching moment, when administrators could explain that the constitutional right to effective counsel is an enormous cultural achievement, a check on the long history of the powerful bringing charges against the powerless. But a student complained Sullivan's presence on Weinstein's team was "deeply trauma-inducing" for victims of sexual assault. Everyone should sympathize with victims of sexual assault, but should we be turning over the keys to the courthouse? Or the college?