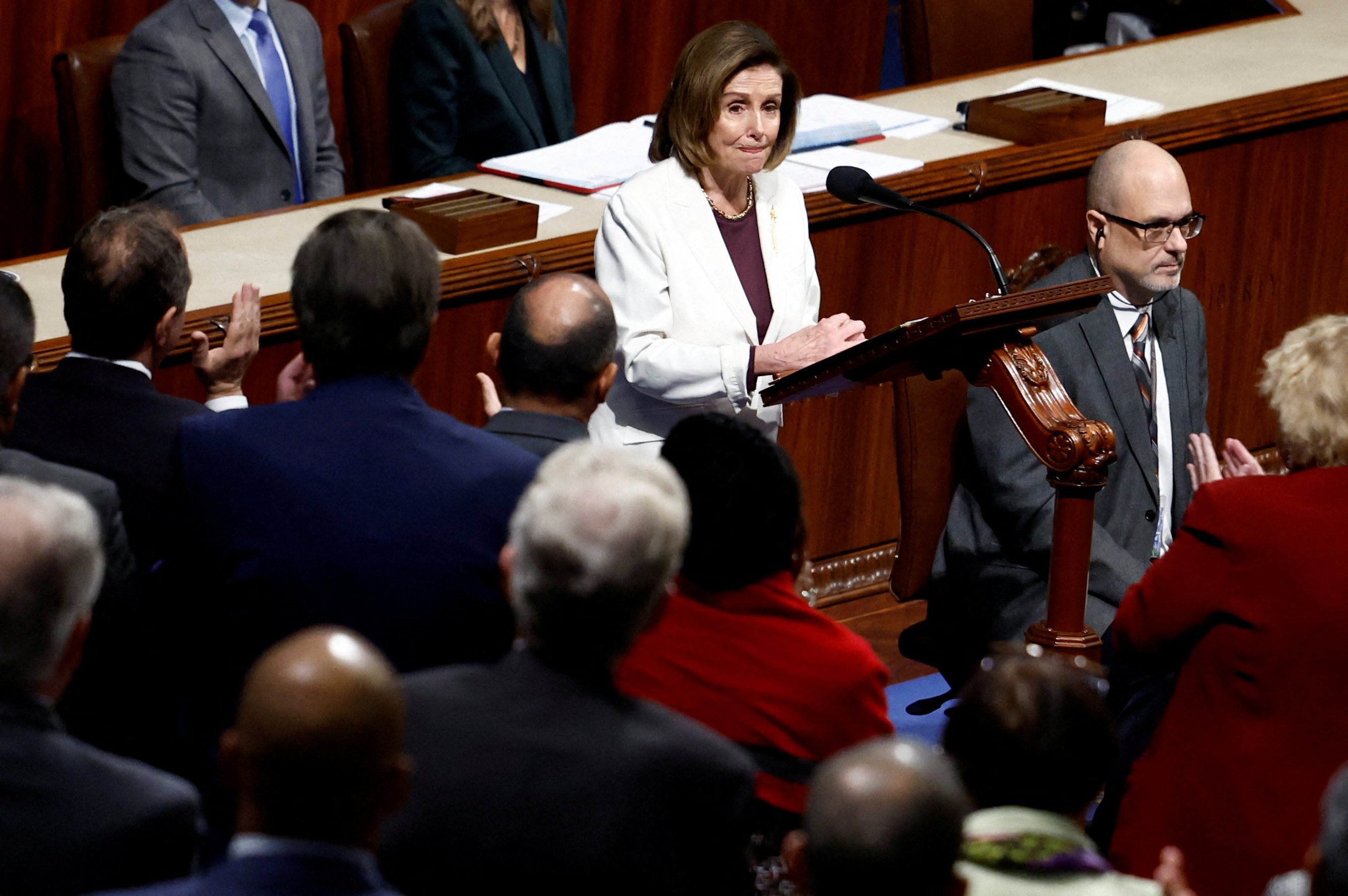 House Speaker Nancy Pelosi, D-Calif., center, announced Nov. 17 she will step down from Democratic leadership but remain in Congress. In her retirement speech she quoted Scripture, and listed being "a devout Catholic" alongside being a mother and grandmother and "proud Democrat." (CNS/Reuters/Evelyn Hockstein)

Republican control of the U.S. House was finally decided last week, causing Speaker Nancy Pelosi to announce that she will be stepping down from leadership in the Democratic Party. The GOP caucus confirmed its current leadership in both chambers even as the Democrats have decided to elect an entirely new slate of leaders in the House. What do these changes portend?

To look forward, we should first look back. The speaker's gavel in the House will pass to Rep. Kevin McCarthy, who has the unenviable job of trying to unite a caucus that is fiercely divided, reflecting the divisions within the GOP generally and already hobbling their efforts in the Georgia Senate runoff. They are already at one another's throats over rules changes the Freedom Caucus is demanding as the price for their support for McCarthy when the full House elects the new speaker in January.

The fault line between the GOP factions is not a particular policy, but a particular style of politics, Trumpian or not. There is, so far, no bridge that crosses the chasm between traditional conservative pols and the conspiracy theorists in the Freedom Caucus. To be sure, traditional conservatives like McCarthy believe in supply-side economics, which at least dabbles in fantasy, but with such a narrow majority, he will have to contend with the Marjorie Taylor Greenes of the caucus, people who think the 2020 election was stolen, that climate change is a myth and that the white nationalists who stormed the Capitol on Jan. 6, 2021, are heroes.

What is likely to unite the Republican ranks is a determined focus on their common enemy. Look for a series of House investigations into President Joe Biden and his son, Hunter, and into Attorney General Merrick Garland's every decision and into accusations of voter fraud. Smart money is betting Kari Lake will be stalking the halls of Congress pleading her case! (I hope so. It guarantees more SNL cold opens with Cecily Strong playing the failed Arizona gubernatorial candidate.) What you will not see is legislation that can pass the Senate and get signed by the president. 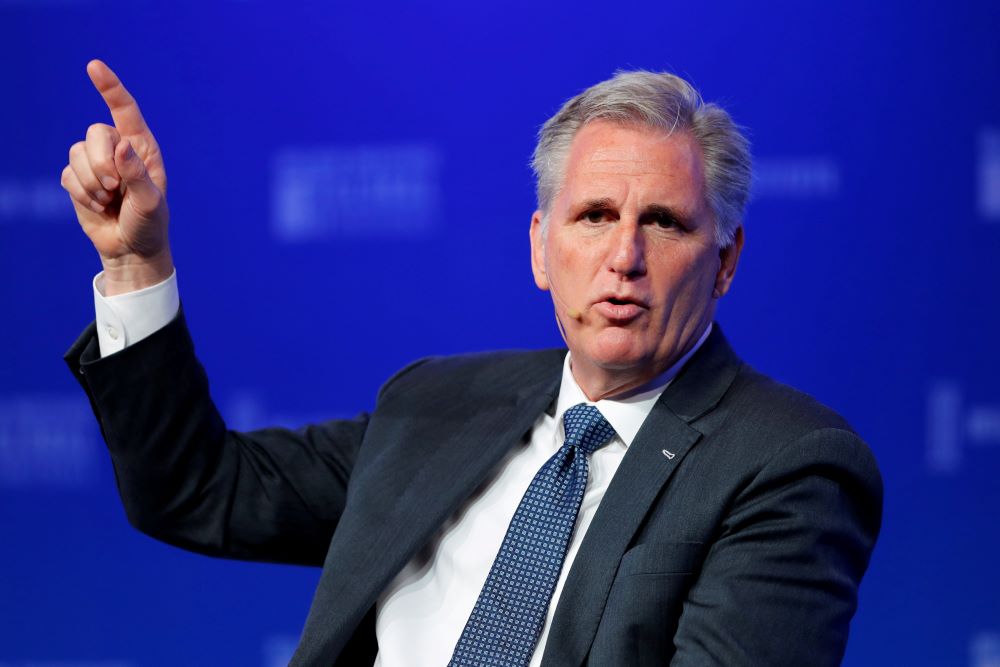 House Majority Leader Kevin McCarthy, R-California, is likely to become House speaker after Republicans regained control of the House of Representatives. He is pictured in Beverly Hills in this 2018 file photo. (CNS/Reuter/Mike Blake, Reuters)

For the Democrats, the look back is far less fraught. Speaker Nancy Pelosi may be the first, and only, woman to have served as speaker, but she achieved that role not by blowing up the old boy network that controlled congressional politics for so long, but by beating the old boys at their own game. In Pelosi, Republicans found someone who epitomized the "San Francisco Democrat" they began anathematizing in 1984, when the Democrats held their convention in the city by the bay. What they had not bargained on was that Pelosi represented San Francisco but she was from, and of, Baltimore, a working-class, ethnic city in which politics had been the vehicle for enfranchisement for her Italian forbears.

And, if you did not know until last week she was Catholic, you did after her retirement speech from the well of the House. Not only did she quote Scripture, she listed being "a devout Catholic" alongside being a mother and grandmother and "proud Democrat." The whole speech reflected the incarnational sensibility so prominent in Catholic thought and spirituality.

Pelosi was a workhorse, not a show horse. Her time as speaker coincided with the rise in social media, but she never clamored for the spotlight. She raised more money than anyone else and she counted votes more accurately. A realist par excellence, she was a master at making sure individual members got something they wanted in major pieces of legislation they might be inclined to vote against. It is doubtful the Affordable Care Act, or the bipartisan Infrastructure Investment and Jobs Act passed in 2021, would have made it across the finish line without her help.

Obviously, I wish Pelosi had been more willing to move her party to the center on abortion. At least she opposed efforts to make the issue a kind of litmus test for membership in the party. I fear even that small concession may be on the chopping block in the years ahead.

In Rep. Hakeem Jeffries, Pelosi has a most worthy successor, someone who is better at communicating the party's message than she was, but someone who also works mostly behind the scenes and whose intelligence and negotiating skills have already earned him widespread support. He has been willing to take on the more party's more extremist candidates, shutting down efforts to challenge some House incumbents last year and earning the ire of fellow New Yorker Rep. Alexandria Ocasio-Cortez, a courage that will be essential to recruiting and defending the kind of Democratic candidates who can win swing districts needed to recapture the House.

I would rather be holding the hand Jeffries has been dealt, even though he will begin his leadership in the minority, than the hand McCarthy must start playing early in the new year. The divisions within the Democratic Party are most about policy, and those can always be negotiated. I am not sure how one negotiates with the Freedom Caucus wing of the GOP — and neither is McCarthy.

One thing is clear. The next two years will be performative. In the absence of legislation, there will be posturing. President Biden should use what leverage he has to get the lame duck session to pass anything critical like raising the debt limit. Continued Democratic Party control of the Senate will allow him to appoint judges who can get confirmed and will prevent the GOP from rolling back his legislative accomplishments to date. Then stand back and watch the Republican Party factions eat each other alive.