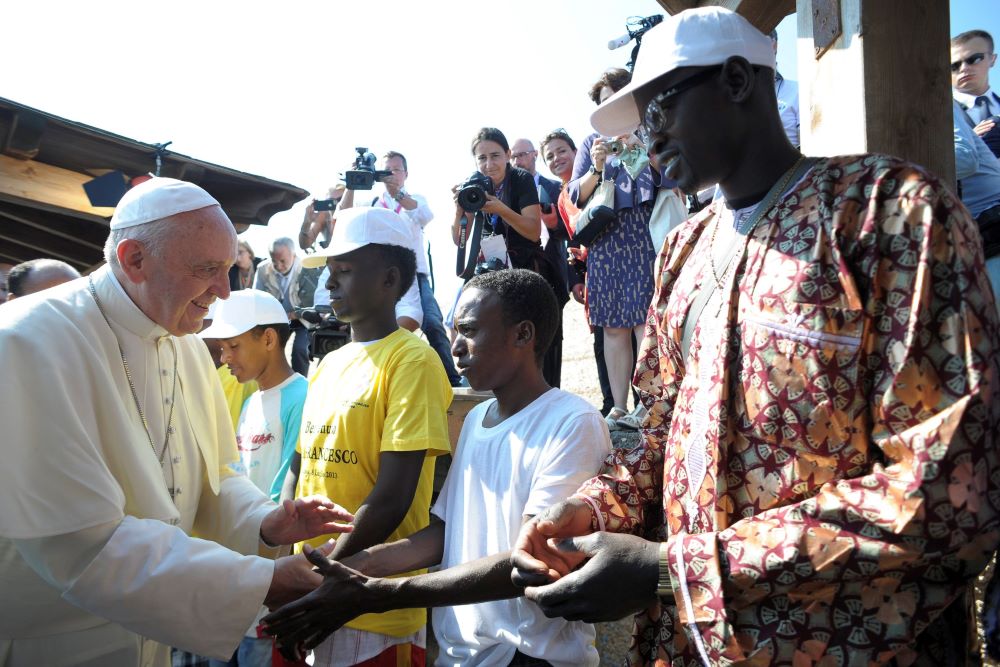 Pope Francis greets immigrants at the port in Lampedusa, Italy, July 8, 2013. There he remembered African and Middle Eastern migrants who died when their boats capsized as they were trying to reach Europe and criticized the "globalization of indifference" toward suffering migrants. (CNS/L'Osservatore Romano via CPP)

Last month, I looked at the U.S. bishops' conference national synthesis of synodal reports, concluding that the process seems to have been more successful than anticipated and commending those who wrote the report for its frankness and comprehensive quality.

I also noted that one section of that report warranted greater attention, the section titled "Social Mission of the Church," and today will offer that attention. It is only one paragraph long:

There are a variety of reasons why Catholic social teaching is still such a secret. It runs counter to many of the conscious and unconscious attributes of our American psyche: the hyper-individualism; the dominance of interests and attitudes drawn from the business community; the suspicion of institutions, consumerism, etc.

It is at the peripheries that we find the secret sauce for renewing the inner life of the church.

Catholic social teaching is also poorly presented to the people in the pews. Because social ethicists have usually been those charged with explaining it, they tend to focus on the content, and not on how it relates to the rest of our faith commitments. It almost seems like it dropped out of the sky in 1891 with the publication of Pope Leo XIII's Rerum Novarum. That encyclical was certainly seminal, and its focus on contemporary industrial society was new because that society was new.

But the foundations of Catholic social teaching run deep in our Scriptures and tradition. Before Rerum Novarum, there was Genesis and Isaiah and Micah and the Gospels and Augustine and Aquinas and Bellarmine.

That small paragraph on social mission in the synod synthesis, though, was one of the few times the document points to what is a dominant theme of this pontificate and a central fact of the teachings of the Second Vatican Council: that going out to the world, especially to the peripheries, will change our ecclesiology.

"Evangelizing presupposes a desire in the church to come out of herself," Pope Francis reportedly told the meeting of cardinals shortly before the conclave that elected him pope in 2013. "The church is called to come out of herself and to go to the peripheries, not only geographically, but also the existential peripheries: the mystery of sin, of pain, of injustice, of ignorance and indifference to religion, of intellectual currents and of all misery."

Cardinal Bergoglio at that same meeting famously recalled the passage in Book of Revelation when Jesus stands at the door and knocks, and speculated that maybe he is knocking to get out. It remains the kind of provocative image that makes the hair on the back of my neck stand up every time I read it.

Catholic social teaching is one of the primary ways for the church to go out of itself. It helps organize our Christian impulse to solidarity and gives shape to the Holy Father's call for a culture of encounter. It is not, as some of his critics suggest, a reduction of the church to a kind of nongovernmental organization with a liturgy.

What they miss, and what I fear some of the synodal sessions have missed, is this: We do not go to the peripheries to evangelize. In a meaningful sense, it is the poor and the marginalized who evangelize us. It is usually they who remind us of what it means to be a Christian.

The core challenge for the Catholic Church in our time and our country is to transcend its upper-middle class moralism, and there is nothing like encountering the acute generosity of the poor, the attentiveness to grace found at an AA meeting or the joy a Special Olympian takes in participation to remind us that living the Christian life is not some "high bar." The poor and the marginalized believe Jesus when he tells us his yoke is easy and his burden is light.

Most of the comments summarized by the synodal report focused on ad intra concerns: the life of the parish, the role of women in the church, relationships between the parish and the diocese, etc. This was not surprising, and these issues are all important, but U.S. Catholics have not so far succeeded in addressing them without inviting further polarization.

Pope Francis' insight is that the best way to get at some of the ad intra issues is by becoming a church that focuses on the ad extra realities. It is at the peripheries that we find the secret sauce for renewing the inner life of the church. It is among the poor of the world that we find how inadequate our ideologies are, that we discover reality is more important for the Christian than ideas. There can be no evangelization without recovering the wonder the disciples felt at the outrageous claim that is the basis for our Christian faith, that the tomb is empty and the Crucified lives. Pope Francis tells us we can recapture that wonder if we go to the peripheries.

As the synodal process develops, we need to find a way to place the ad extra focus first. Catholic social teaching is a part of that, as is shared, direct charitable service to the poor and the marginalized. The synthesis reported what they heard, and those ad intra concerns are real. The tension over liturgy or the role of women or lousy sermons or indifferent chanceries will be resolved if we listen to Jesus. That starts by going where we know we will always find him, in the homeless shelter and the nursing home and the prison.

A version of this story appeared in the Oct 28-Nov 10, 2022 print issue under the headline: The secret to healing the church is looking outward, not inward.