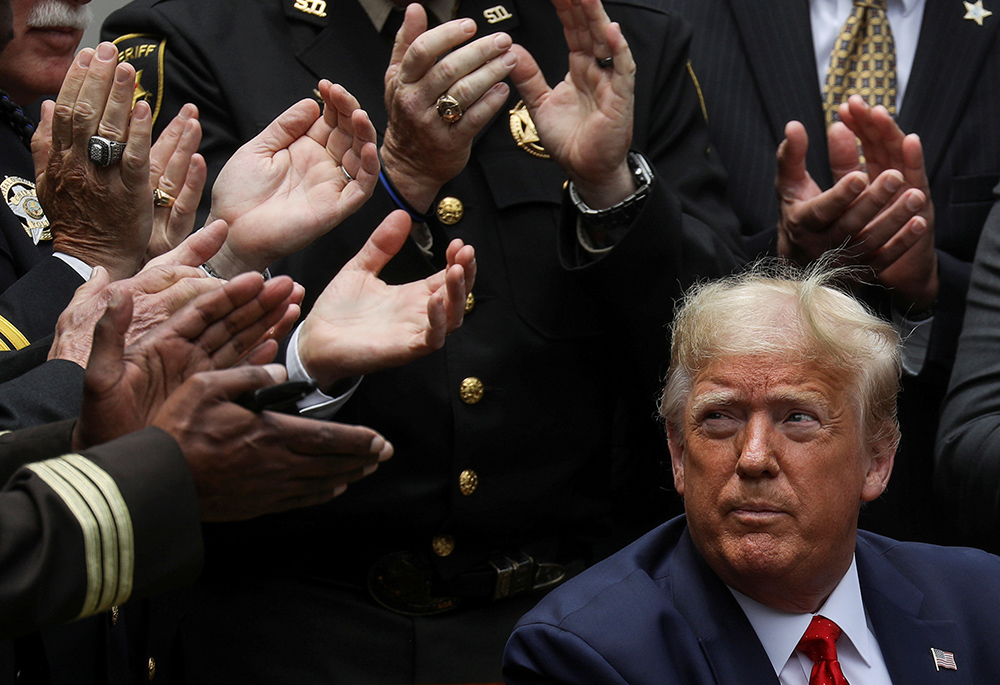 President Donald Trump listens to applause after signing an executive order on police reform at the White House in Washington June 16, 2020. (CNS/Reuters/Leah Millis)

There are a couple things I don't understand — and I bet you don't either.

Fourteen years ago, the Obama-Clinton presidential season seemed to become tighter than usual. It was, after all, a contest between the country's first woman candidate and first Black candidate. Both were new figures to the scene, known but not really. One won the election, the other did not, but both went on serving the country with great commitment and without the iota of a whine about losing.

More than that — or because of it, perhaps — that year's Republican/Democratic animus was already beginning to raise its hoary head. So, I decided to publish a "Prayer for Leadership" to bring the spiritual to the political, to enable us to each think through the implications of the moment in a soulful as well as a civil way.

Now we're at another political inflection point where the strain between the parties and its consequent effect on the unity of the country as a whole is even more imminent. More present. More inclined to undermine everything this country has ever claimed to be.

I decided that I ought to look at that prayer again.

The prayer for leadership was direct: It defined our own spiritual responsibility and values in the face of this changing world, this immigrant globe, this capitalist dream, this shifting culture. It opened:

Give us, O God,
leaders whose hearts are large enough
to match the breadth of our own souls
and give us souls strong enough
to follow leaders of vision and wisdom.

The call itself is a challenge to Americans one at a time.

It takes us out of the realm of pleading supplicants waiting for a boon from a nanny government. It is "the breadth of our own souls" that will determine the kind of leadership we get. 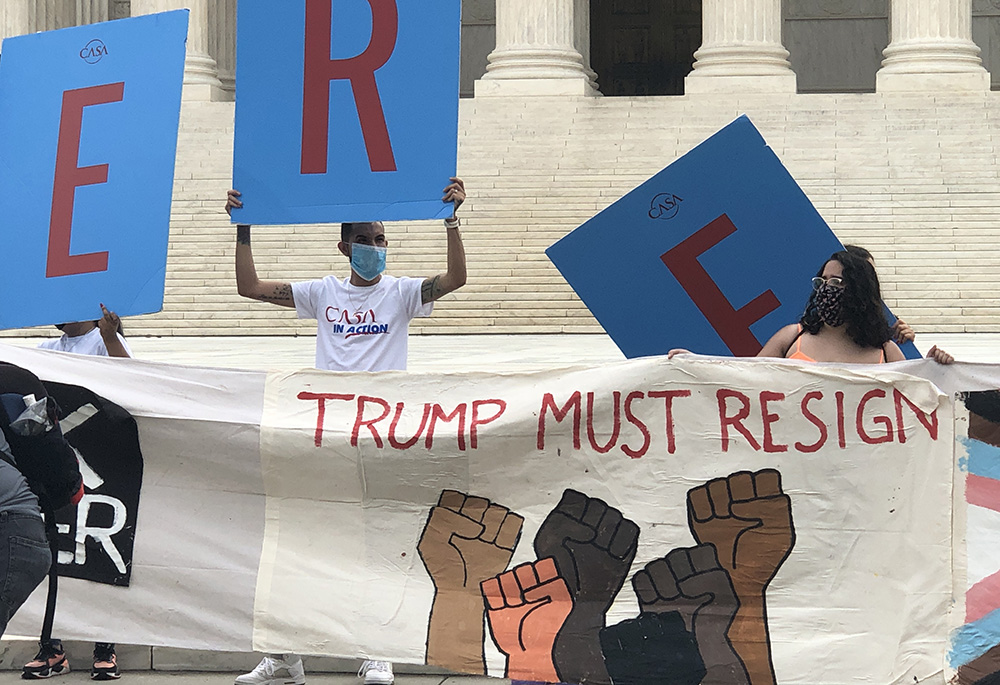 Supporters of the Deferred Action for Childhood Arrivals program hold signs and cheer at the U.S. Supreme Court in Washington June 18, 2020, after the justices handed down a 5-4 ruling rejecting then-President Donald Trump's executive order to cancel DACA. (CNS/Rhina Guidos)

The American soul is made of individualism. It doesn't depend on social mores. It expects personal commitment and singular presence. It tells us quite clearly that the person we get will be a mirror of ourselves. We get who and what we are.

In seeking leaders
let us seek more than development for ourselves
though development we hope for
more than security for our own land
though security we need
more than satisfaction for our wants
though many things we desire.

It was clearly a Christian text for a Christian population. But this time it was also clearly not going to be easy to make the link between power and the people who need it most.

At the launch of the 2016 election season, after Donald Trump came down a golden escalator to announce his powerful and self-certain presentation, things were different. The announcement of his candidacy for president of the United States had all the ring of the imperial style of Archangel Gabriel's announcement to the humble Mary of Nazareth of God's great favor. Sort of. The major difference, of course, being that Mary of Nazareth never self-selected — let alone demeaned anyone else.

On the contrary. This presentation was anything but humble. Grandiose was more like it. Light years marked the stretch between this and from concerns defined in the leadership prayer.

One thing for sure, he spent no time pronouncing to the various social levels of the country that he would meet their needs. But his concerns were much greater than the costs of medicine in America, the low wages for service workers, the poison that still plagued our national unity in the form of racism, let alone the partisanship that clogged the progress of the country in favor of the division of government and/or the immigration overload and the climate chaos that was facing us as a nation.

But the prayer continued:

Give us insight enough ourselves
to choose as leaders those who can tell
strength from power,
growth from greed,
leadership from dominance,
and real greatness from the trappings of grandiosity.

We trust you, Great God,
to open our hearts to learn from those
to whom you speak in different tongues
and to respect the life and words
of those to whom you entrusted
the good of other parts of this globe.

Instead, Trump pledged his commitment to close the border to Mexicans who he said were rapists, drug dealers, laggards. The fact that Latinos have been good citizens here for over 100 years was left unsaid but the smear that went with it stuck. He ignored our long-term allies and set out to foster support from North Korea, China and Russia, whose only block to international control was the United States itself.

Think back to the moment in the electoral process when many of the Republican Party of representatives and senators stood in regiment style while reporters took their pictures against a backdrop of posters that declared in big letters "TRUMP, NEVER. NEVER TRUMP." And then no matter. At the next political atrocity, they simply rolled over.

To this day — as in FOREVER TRUMP.

From where I stand, it is easy to dismiss Donald Trump as either a politician or a democratic leader.

What can't be so quickly dismissed is the fact that however weak the character he brought to the position, he was elected. It's not as if he lied about who he was, what he was, what he wanted, how he got it, where he intended to go with it. On the contrary.

The point is, as the prayer points out, it's not about him. It's about us — about what we want and what we're willing to do to get it.

So where was the mistake? In the prayer, in a population that says one thing but means another, or in politicians and political parties that — whatever the latest moral debacle of the presidency — to this day will support politicians who will malign others, even at the cost of our own principles, as long as they keep their own seats in silence.

You have to wonder whether our prayers have anything at all to do with our real attentions.

We ask these things, Great God,
with minds open to your word
and hearts that trust in your eternal care. Amen.