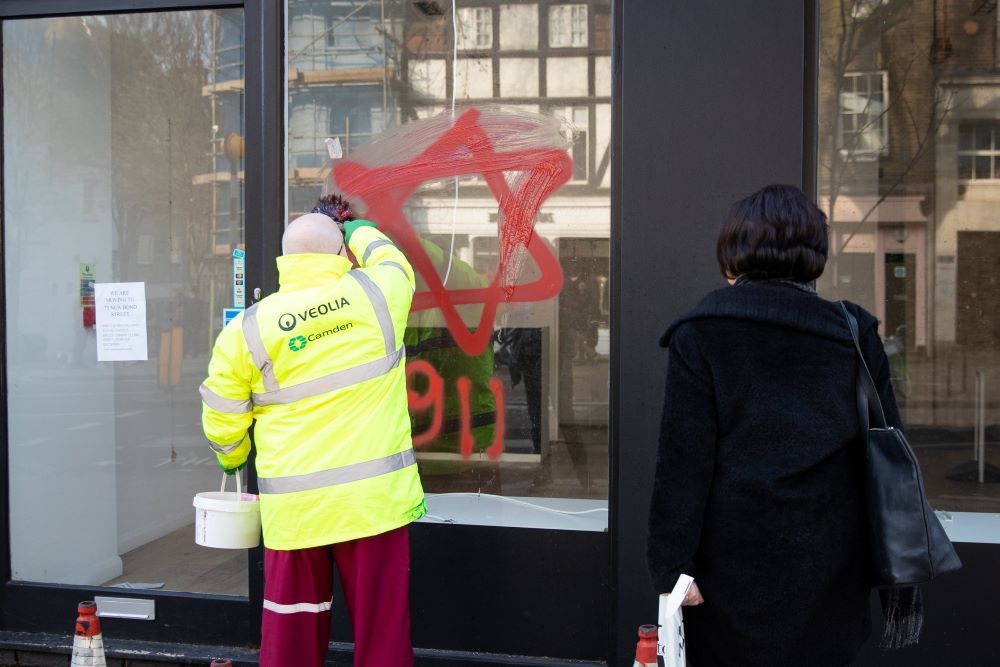 A worker removes antisemitic graffiti on a shop window in the Belsize Park neighborhood of London Dec. 29, 2019. (CNS/Reuters/Aaron Chown)

Last month a Twitter account called @GKCdaily, which regularly posts quotations from English writer G. K. Chesterton, tweeted a quote from the writer's 1916 essay "Two Cranks and a Cosmopolitan." The quotation was: "It is not that Jews are traitors, but rather that traitors are Jews."

It might be easy to write off this incident as an isolated case of a fringe crank sharing the bigoted ideas of a man who died nearly a century ago. But Chesterton is not just any Catholic writer. In his day he enjoyed enormous popularity as a writer, speaker and radio personality. And today, among Catholics, he is revered as an apologist and a wit, and not only by conservatives.

That Chesterton held antisemitic beliefs is not in question. It is a thread that runs through his writings, both fiction and nonfiction, and his own contemporaries criticized him for it. In 2019, Bishop Peter Doyle of Northampton, England, rejected the cause for Chesterton's canonization partially due to "the issue of anti-Semitism." As author Dawn Eden Goldstein recently argued in a talk for the Chesterton Society, and as I have also pointed out, this is a problem that contemporary Catholics need to grapple with when we discuss Chesterton's works or his influence.

But a far bigger problem is that the antisemitism of G.K. Chesterton and others of his day is no mere historical artifact. By Oct. 24, more than 1,700 Twitter accounts had "liked" the antisemitic tweet from @GKCdaily. Many of these accounts proudly announced their Catholicism in their bios. 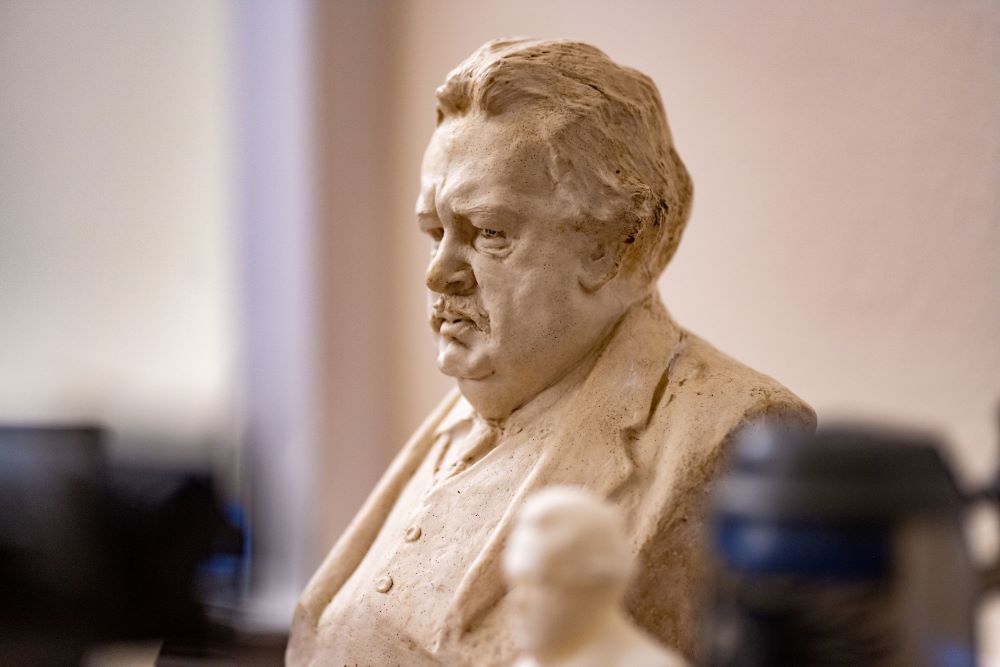 Around the same time that Catholic Twitter was clashing over the antisemitism of a beloved writer, rapper Ye (formerly known as Kanye West) came into the spotlight for antisemitic remarks he made in a Revolt TV interview. This provoked an outpouring of support for Jewish communities, condemnation of antisemitism and demands that companies cut ties with Ye. However, at the same time, members of hate groups have come forward in support of him.

Again, Ye is not the real problem here. This is not the first time he has exhibited problematic behavior. It also seems a little too convenient to put all the focus on a Black man when antisemitism in the modern world has largely been driven by white supremacists, and too often tolerated by polite moderates. If we are going to address antisemitism, we need to do more than criticize it in a bygone apologist or denounce it when it comes from a troubled Black performer. We need to deal with it at its roots. And we need to deal with it where it arises in our own communities, or in communities close to us.

Today, there are different variations on antisemitism, but a strong case can be made that antisemitism as it exists in contemporary Western culture has its roots in Christendom. Once Christianity had established itself as a distinct religion instead of one out of a variety of Jewish sects, Christian writers of the early church began to revile Jews and Judaism. The writings of church fathers as revered as St. John Chrysostom and St. Justin Martyr are laced with antisemitic rhetoric and denunciations of Jews as murderers of Jesus. In the Middle Ages Christians persecuted Jews, denied them citizenship, excluded them from society and spread the "blood libel" that Jews were secretly using the blood of Christian children in ritual sacrifices.

With the rise of modern eugenics in the 19th and 20th centuries, antisemitic ideologies were given a new slant, but many of the old ideas about Jewish people as sinister, cursed, dangerous or irreducibly "other" remained. Nationalist ideologies such as National Socialism and Fascism emphasized the importance of a homogeneous populace of healthy, heterosexual families fully devoted to the good of the state. Jews, along with the Roma, LGBTQ people and the disabled, had no place in these nationalist utopias.

The church will be unable to make further progress in righting this wrong if we tolerate antisemitism in our faith communities.

As Christian nationalism gains traction in the U.S. and in Europe, antisemitism is once again ascendant, especially in groups that fetishize a return to some mythic nationalist past, whether the "greatness" of an imaginary bygone America or the glory of medieval Christendom. The consensus among many far-right Christians who pine for an earlier age is that liberal democracy has failed. The recent "Restoring a Nation" conference at Franciscan University of Steubenville offered a glimpse of what these "New Right" leaders have in mind as an alternative: forced legislation of conservative Christian rules and norms. Globalism is out, nationalism is in, and "wokeness" is the enemy.

Catholics who are drawn toward these New Right ideologies tend to be traditionalist in their liturgical preference. Many associate the Tridentine Mass of the Middle Ages with a social order they view as superior, even if theirs is comic book parody of the era, all noble kings, brave knights and piously submissive women. Actual medieval cultures were far more diverse and complex, and in some respects more permissive, than those who fetishize the Middle Ages could imagine. 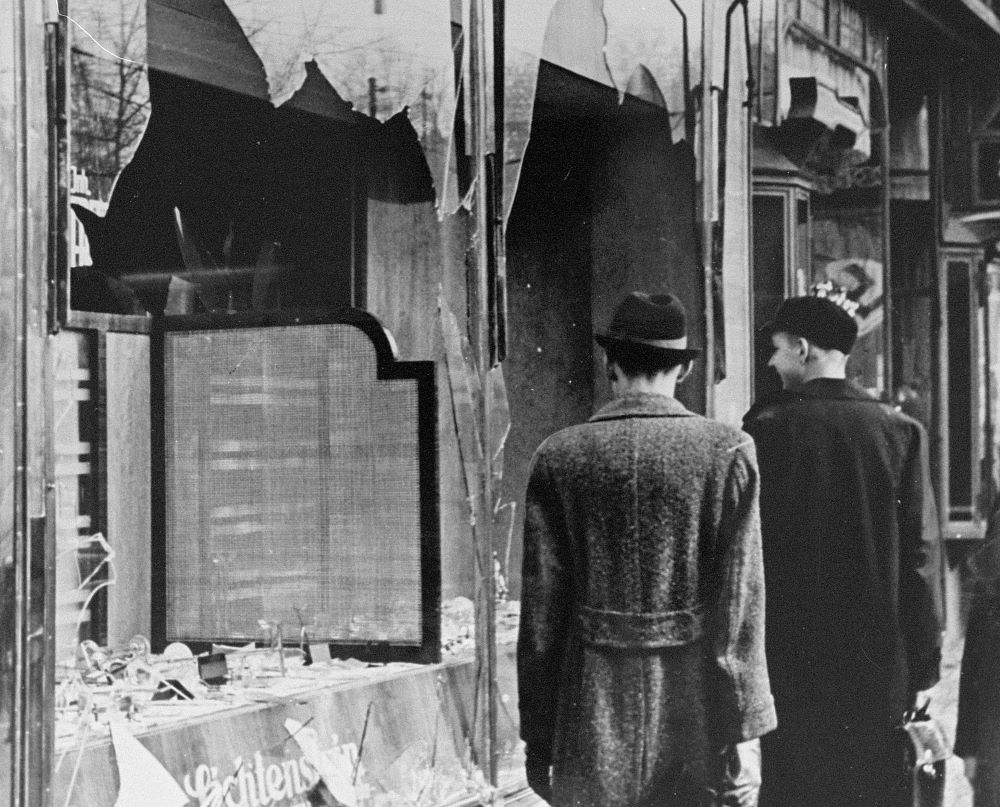 Germans pass the broken shop window of a Jewish-owned business in Berlin that was destroyed Nov. 9-10, 1938, during Kristallnacht, or the "Night of Broken Glass," when Nazis in Germany torched synagogues and vandalized Jewish homes and schools. (CNS/United States Holocaust Memorial Museum, courtesy National Archives and Records Administration, College Park, Md.)

The Catholic Church formally rejected antisemitism in the Second Vatican Council document Nostra Aetate (The Declaration on the Relation of the Church to Non-Christian Religions). But this is just the first step toward repentance and reconciliation. The church will be unable to make further progress in righting this wrong if we tolerate antisemitism in our faith communities.

No, not every traditionalist Catholic is antisemitic. Perhaps only a few overtly embrace antisemitism. But antisemitism, along with other prejudices, is often a feature of traditionalist groups. It seems to be one of the few ways they manage to ape medieval culture successfully. I have made no secret of my own Jewish ethnicity and heritage, though I am a practicing Catholic today, and for years I have been targeted by antisemites, many of them proudly Catholic and flagrantly traditionalist. I have had hate mail sent to my social media accounts and my website, and I have blocked numerous Twitter accounts that have targeted me for harassment.

As for those traditionalist and conservative Catholics who claim not to be antisemitic, and who assert that they love their Jewish friends, their words are empty as long as they pretend this is not happening, or tolerate the presence of antisemites in their communities. The real test of their claims is how they behave. When someone close to them makes an antisemitic joke, do they laugh, or do they gently explain why such jokes are not funny? When someone uses an antisemitic trope, such as that "Jews control Hollywood," do they correct that person, and explain how false and harmful these tropes are?

In September 2021, NCR reported that a Catholic ecommerce shop that sold saint-related merchandise was offering Maximilian Kolbe T-shirts and dolls that used Auschwitz prison garb as part of their design. When asked to remove the merchandise, the shop owner did initially agree to stop selling the Auschwitz-themed T-shirts but kept the dolls with the concentration camp prison clothing available. Another Catholic ecommerce retailer decried the request to remove the Auschwitz-themed items as "cancel culture."

The shop owners probably had no intention of being antisemitic, but turning the prison clothing used for genocide into casualwear, or using it as part of fun props for kids’ catechesis, makes light of an evil so monstrous that it is difficult to comprehend. The correct response, when informed that an image or action validates bigotry, is to apologize and try to do better. The moment a person who is called out on their perhaps inadvertent bigotry decides to double down, that bigotry is no longer inadvertent. It is intentional and malicious.

Some things need to be canceled. Antisemitism should never be permitted in any community, especially those that claim to follow the teachings of Jesus, himself a faithful Jew. At a time when hate speech and hate crimes against Jewish people are on the rise, what might otherwise be written off as a few backward people behaving in backward ways poses a serious danger, and one that people of goodwill, no matter their faith affiliation, cannot afford to ignore.