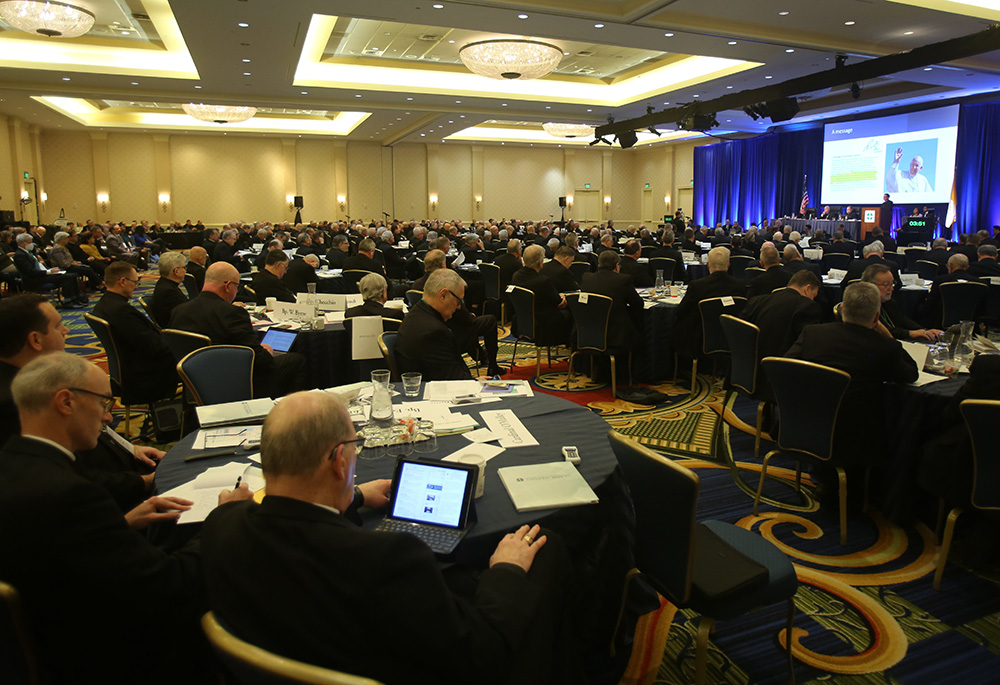 Bishops attend a Nov. 16 session of the fall general assembly of the U.S. Conference of Catholic Bishops in Baltimore. (CNS/Bob Roller)

I suppose it was fitting, in a depressing kind of way, that the U.S. bishops' conference plenary coincided with former President Donald Trump's announcement he is seeking the presidency in 2024. In both church and state, the future will be dominated by divisiveness and a culture war ethic for the next few years, a result that contradicts the founding mission of both. The future is grim.

The church understands its most essential mission to be proclaiming Christ as "Lumen gentium," the "Light of nations" in the words of the Second Vatican Council. "Since the Church is in Christ like a sacrament or as a sign and instrument both of a very closely knit union with God and of the unity of the whole human race, it desires now to unfold more fully to the faithful of the Church and to the whole world its own inner nature and universal mission,” the Dogmatic Constitution on the Church states.

Alas, the "unity of the whole human race" is not likely going to be part of the U.S. bishops' agenda during the tenure of Archbishop Timothy Broglio as president of the conference. As Cardinal Angelo Sodano's right-hand man during the 1990s, he not only witnessed the willful credulity extended to serial pedophiles like then-Fr. Marciel Maciel, founder of the Legionaries of Christ, but the utter lack of sympathy and solidarity extended to the victims of clergy sex abuse. The 1990s was the era in which Rome shot down any and all efforts by U.S. bishops to confront the crisis. Ask the bishops who were trying to deal with pedophiles in their ranks back then and they will tell you: Rome would not budge; you could not laicize these monsters.

At the press conference after his election, when asked about those years and specifically about the Maciel case, the best the new president could offer was the banal observation that "hindsight is always 20/20." To be clear, Broglio worked with Sodano until 2001. It was in 1997 that the Hartford Courant first published an expose of Maciel's depredations. You did not need hindsight to smell the corruption. Sodano, instead, facilitated the corruption. Broglio did nothing.

To be sure, Broglio worked for Sodano, not the other way round, but in the face of moral enormity, there is a moral obligation to avoid collaboration. He could have resigned. He could have become a whistleblower. Instead, he became, at best, a bystander.

There are plenty of other instances of Broglio defaulting to a culture warrior platitude in the face of complex realities. For example, Broglio has claimed the sexual abuse of children is "directly related to homosexuality" despite the John Jay Report demonstrating no such linkage. This recourse to scapegoating is the kind of slothful moral analysis that makes culture wars possible. Broglio's choosing to ignore the needs of the common good in confronting the COVID-19 pandemic is another example. 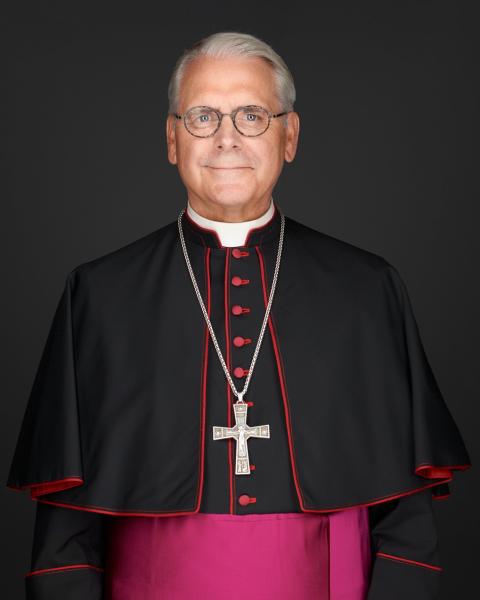 There are some bishops who did not know of Broglio's association with Sodano, or about his other examples of culture warrior thinking. But the vote for a new conference secretary had no such static. The bishops chose Archbishop Paul Coakley of Oklahoma City over Newark Cardinal Joseph Tobin.

When disgraced former nuncio Archbishop Carlo Maria Viganò issued his inflammatory "testimony" in 2018, and called on Pope Francis to resign, Coakley did not defend the pope, he defended Viganò. "While I lack any personal knowledge or experience of the details contained in his 'testimony,' I have the deepest respect for Archbishop Viganò and his personal integrity," Coakley affirmed. He did not mention any respect he has for Pope Francis. Nice.

Coakley also led the discussion on the bishops' quadrennial document about voting, "Forming Consciences for Faithful Citizenship." The need to junk the current text has been evident for some time, but the conservatives in the conference did not want to abandon it, not after they succeeded in getting the issue of abortion labeled as their "preeminent" concern. So Coakley said there wasn't time to undertake a new text. To those who complained about the document's excessive length, he replied that a one-page document would not suffice, even though other episcopal conferences manage to do it. In the end, the bishops voted for keeping the current document, even though it has had little demonstrable effect, and adding some social media bells and whistles.

The best to be hoped for is that the U.S. bishops' conference's decline into irrelevance will continue. There was a telling moment at the press conference on Tuesday, Nov. 15, when someone asked Broglio if he would meet with President Joe Biden. He said he would, but first he said that outgoing conference president Archbishop José Gomez had not been able to arrange such a meeting. 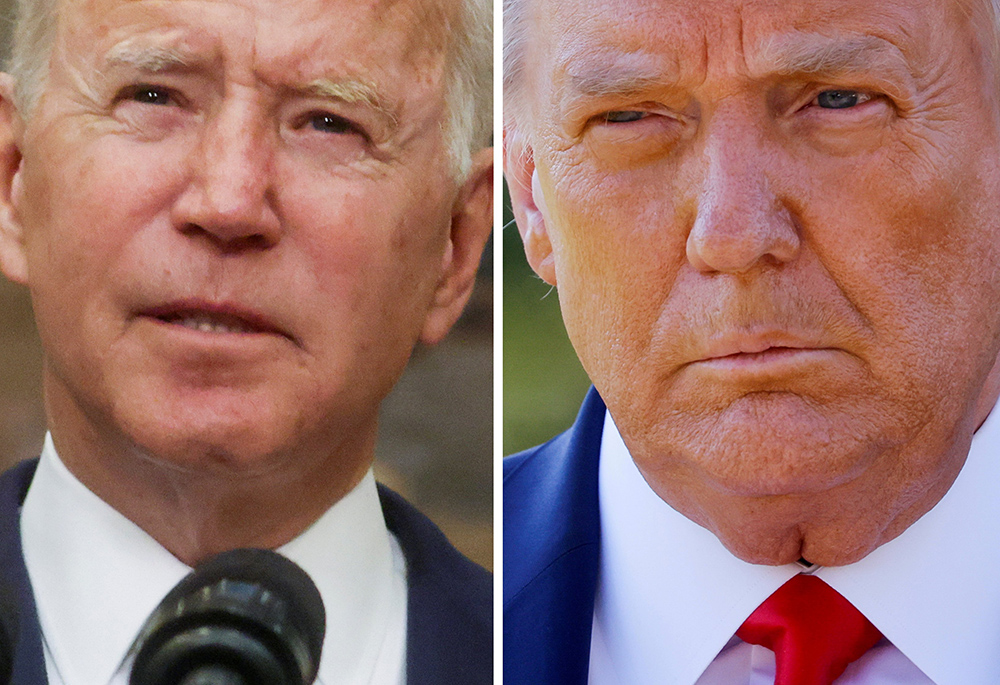 Let that sink in. The second Catholic president in our nation's history has not felt it necessary to meet with the president of the U.S. bishops' conference. Biden is well advised. At best, such a meeting would be a waste of time.

We can hope that Trump's future will likewise prove a lesson in irrelevance. He never worked with Cardinal Sodano, but Trump also knows something about corruption. The day before he announced his candidacy, The New York Times reported the Trump family business had signed a deal with a Saudi Arabian real estate developer. You might have thought it would occur to Trump — never one to be disturbed by a conflict of interest — that foreign business entanglements might not be something the country would want in a president. Opportunities for grift always comes first with this guy. He lives in his own little world as do some of our bishops.

Trump knows that his only ticket back to the White House is his ability to demonize immigrants, traffic in lies about our electoral processes, set American against American, deliver winks and nods (and sometimes an explicit shout-out) to white nationalists and ignore the Constitution. His political success rests on the possibility of convincing enough of us that his dystopian vision is accurate, and that he has — no, that he is — the cure.  No one has ever suggested Trump is a "sign and instrument" of the "unity of the whole human race." His presidency was a darkness to the nations, especially our own nation.

Not everything was gloomy this week in Baltimore. One conservative bishop, with a wry sense of humor, suggested before the balloting, that in the interests of consistency, the votes of the bishops from California, Arizona and Nevada not be tabulated for a week. That's funny. 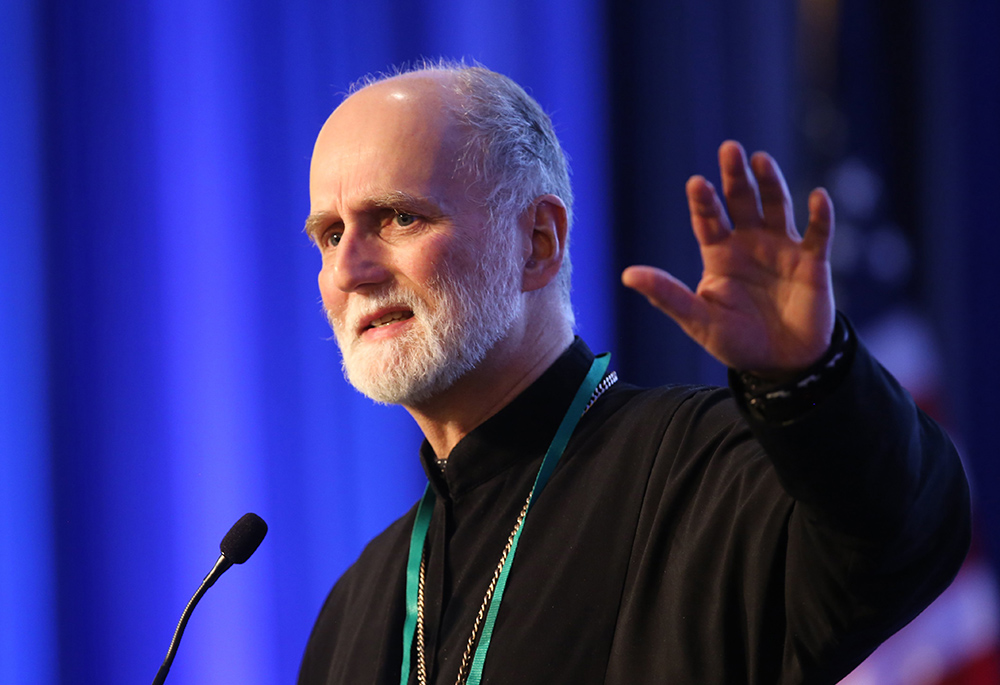 Archbishop Borys Gudziak of the Ukrainian Catholic Archeparchy of Philadelphia speaks during a Nov. 16 session of the fall general assembly of the U.S. Conference of Catholic Bishops in Baltimore. (CNS/Bob Roller)

The selection of Bishop Joseph Bambera, of Scranton, Pennsylvania, to chair the Committee on Ecumenical and Interreligious Affairs was one hopeful sign, and Bishop Barry Knestout of Richmond, Virginia, will be very able as chair of the Committee on the Protection of Children and Young People. Archbishop Charles Thompson of Indianapolis will also be good at the Committee on Evangelization and Catechesis.

The highlight of the meeting was the address by Archbishop Borys Gudziak of the Ukrainian Catholic Archeparchy of Philadelphia, who spoke movingly to the body of bishops about the ongoing sufferings of the people of Ukraine. He commended the bishops and the people of the United States for their generous support and humanitarian aid. He spoke without notes, and always in a profoundly spiritual key. You could hear a pin drop in the ballroom. This is what episcopal leadership looks and sounds like.

Still, the dominant reality, for the bishops' conference and for the country, is that more division is one the way, and the crying need for common purpose and shared aspirations seems ever more remote. 1 Peter 3:15 tells us that we must always be prepared to give an account of the hope that it is within us through Christ Jesus. This week, that became harder, much harder. 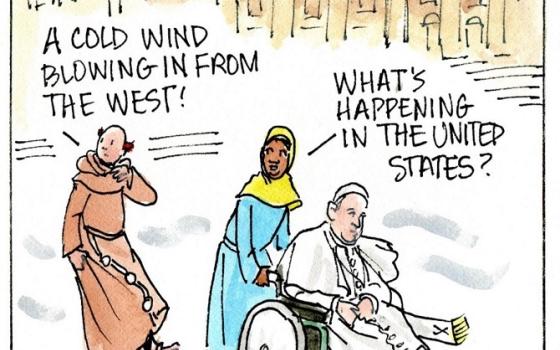