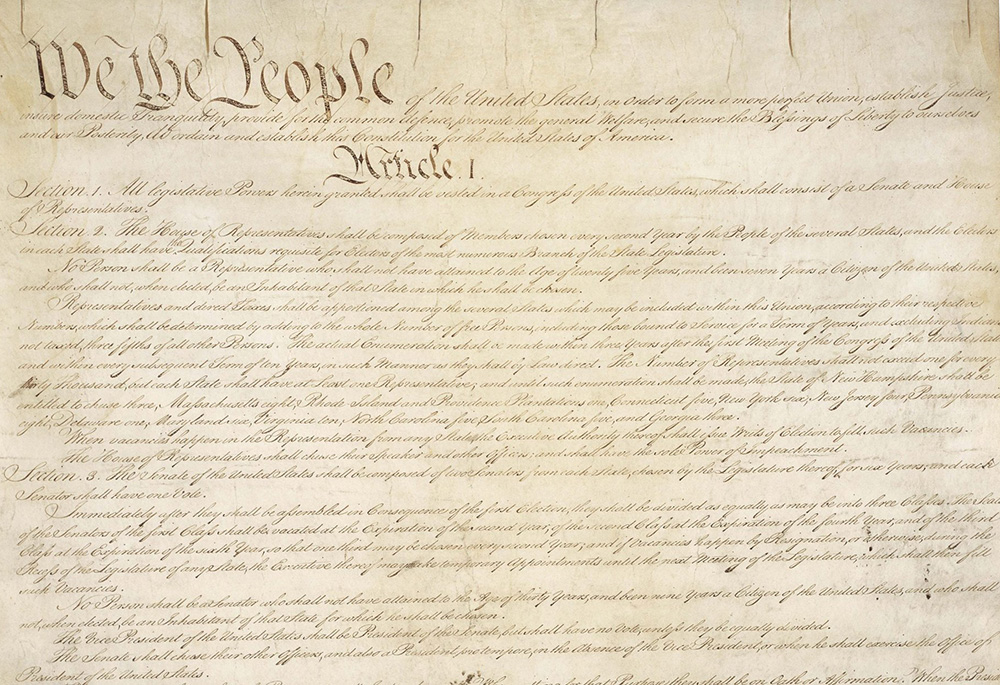 Pictured is the first page of the U.S. Constitution, the fundamental law of the government. It was written in 1787 in Philadelphia by 55 delegates to the Constitutional Convention. It is the oldest written national constitution still in use. (CNS/Courtesy of National Archives)

Just like the United States of America, South Africa is not a perfect country. No such perfect place exists in this world. However, since spending several weeks in South Africa a few months ago I have found myself continuing to reflect on the opening sentence of its constitution and wondering what it would mean if the U.S. were to adopt a similar preamble.

To be clear, the current U.S. Constitution doesn't have a terrible start. Its opening sentence reads:

We the People of the United States, in Order to form a more perfect Union, establish Justice, insure domestic Tranquility, provide for the common defence, promote the general Welfare, and secure the Blessings of Liberty to ourselves and our Posterity, do ordain and establish this Constitution for the United States of America.

It's a perfectly fine opening statement, and there are some genuinely positive elements here. Beginning with the people as the source of governmental authority and power, this opening line presents mostly a forward-looking or aspirational description of what the American founders hoped would succeed in replacing British monarchical rule.

Among the key priorities identified are unity, justice, tranquility, common defense, general welfare and civil liberty for those drafting the document and their descendants. At first glance, who could disagree with these priorities and commitments?

Having been born and raised in the U.S. I admit to taking this opening line for granted almost as much as I have the opening line of President Abraham Lincoln's 1863 Gettysburg Address or other well-known documents like them. These are classics of American history, which we studied from elementary school onward. They appeared in my textbooks and on posters in many of my childhood classrooms.

But later in life, especially as I studied more of American history in high school and college — not just the exciting and positive dimensions, but also the more complicated and sometimes downright shameful ones — I found myself contextualizing better that opening line and asking some questions. For example, whose liberty was being secured or whose justice was being sought?

When the Constitution was ratified in June 1788, this didn't include women, immigrants or enslaved Africans, nor did it include the native peoples whose lands were being unlawfully appropriated and reimagined as a new country in the name of "freedom."

Like many others, I came to realize the incoherence of talking about constitutional "originalism," realizing that despite the lofty rhetoric surrounding the founding of a new country, there was no recognition of either the price paid by oppressed and enslaved populations or acknowledgement of who was excluded from this ostensibly grand vision from the start.

I continue to be flabbergasted when a woman or Black Supreme Court justice, such as Amy Coney Barrett and Clarence Thomas, respectively, claim to espouse an originalist juridical hermeneutic. In both illustrative cases, there seems to be little consideration of the irony that the drafters and ratifiers of the Constitution would never have imagined (let alone permitted) women or people of color to have fundamental democratic rights like voting or property ownership, let alone serve on the highest court of the land.

This sort of observation is neither new nor particularly interesting, but it does help explain why I was so captivated by the opening sentence of the post-apartheid South African Constitution ratified in 1996. It reads:

We, the people of South Africa,
Recognise the injustices of our past;
Honour those who suffered for justice and freedom in our land;
Respect those who have worked to build and develop our country; and
Believe that South Africa belongs to all who live in it, united in our diversity.

While I don't think it is in any way realistic to think that Americans are poised to amend our Constitution to include a statement such as this — a fantasy made all the more remote in an age of heightened political polarization and mutual distrust — I have allowed myself in recent months to consider what the implications of such an American statement might imply.

First, we would begin with acknowledging our national "original sins" of Indigenous genocide and chattel slavery. We could also add to that centuries of sexism, xenophobia, religious discrimination and other forms of "injustices of our past," many of which persist and continue to harm still vulnerable communities. Such admission of "what we have done and what we have failed to do" should not appear strange to Roman Catholics who regularly pray the Confiteor at liturgy. And yet, there remains a strong resistance to even acknowledging these past injustices, let alone seeking atonement, especially from many Christians generally and Catholics in particular.

Second, while there would certainly be a place for honoring those who have served in the military and peacekeeping efforts here and abroad, we would also expand our recognition to include those pioneers for justice and inclusion who have not always been recognized but were often subjected to violence and even death because of their work. Those who have and continue to fight on behalf of LGBTQ inclusion, equal rights for women, civil rights for communities of color, justice for migrants and refugees, environmental activists and a whole host of others who have, as the South African Constitution puts it, "suffered for justice and freedom in our land." 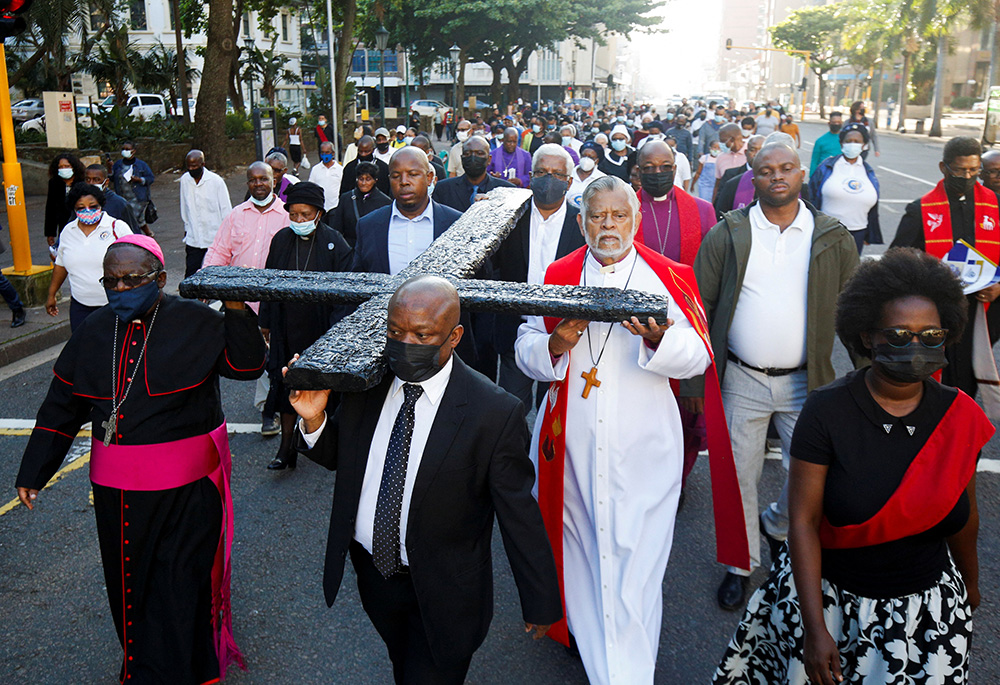 Third, instead of succumbing to tribalism and manifold forms of cultural and political polarization, perhaps we could "respect those who have worked to build and develop our country," including our political representatives, educators, first responders, laborers, and all those who physically and metaphorically build and rebuild this place we all call home. Too much energy is spent by groups identifying who ought to be excluded, and too little respect is paid to those whose contexts and experiences may be different from one's own.

My last reflection involves the last line of the South African text, which says that this country "belongs to all who live in it." This includes those of various immigration status, those who practice different religions, those who think differently, those who love differently and those who vote differently. All who live here ought to have equal claim to the nation they call home. But the increased xenophobia and nationalism in the American context promotes the opposite condition.

The last line also includes the call to unity amid diversity. Difference is neither an error nor a weakness, but it is often presented as such by those seeking to galvanize political support in our country. Our differences should be seen as mutually enriching gifts given to us by God. Our unity shouldn't come at the expense of another person or community's dehumanization, vilification or dismissal. Our unity should be grounded in our shared origin as beloved creatures of an incomprehensively loving Creator.

While South Africa continues to struggle to live out this powerful constitutional vision, these beautiful words serve as a reminder of what is hoped for and may someday be more fully realized. But their existence was only made possible when the country launched efforts, imperfect as they were, to begin acknowledging the truth of an unjust past in order to strive toward the possibility of reconciliation someday.

We in the United States have not even taken the first step in such a direction and have only seen efforts to suppress the dangerous memories of our collective past increase with book bans and censorship. But I will not give up hope that another way is possible, even here in the U.S.

And the beauty of that one South African sentence bolsters me, as does the wisdom of St. Francis of Assisi who is remembered to have said to his fellow friars near the time of his death: "Let us begin, brothers, to serve the Lord God, for up until now we have done little or nothing." It is never too late to begin again.