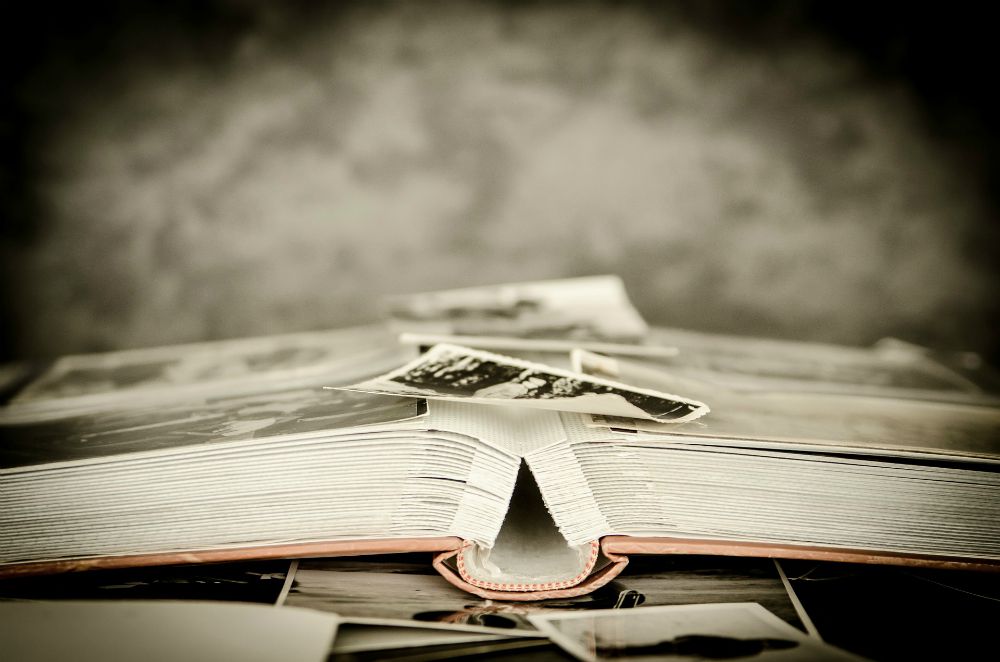 There is a rarely-discussed truth among us parents of three or more children. In general, we just seem to relax the more kids we have. It can't be helped. We are just plain busy, and really tired.
If you want proof, pull out your family photo albums. There will be something like 8,000 photographs of your first child. Sleeping. Tummy sleeping. Back sleeping. Side sleeping. Laughing and reaching for a rattle. Grimacing as a diaper is filled. Grinning with cheeks covered with baby food. And those are just from the first month.

If your next child is a different gender, that is, we had a girl then a boy, or a boy then a girl, there are perhaps half as many photos of that one. Big sister holding baby brother. Big brother holding baby sister. First holidays. First trip to the zoo. First day of school.

After that, not so much.

When my third child, son Duncan, was about eight, he sat on the couch and opened a thick album on his lap. He called over to me where I was preparing dinner in the kitchen.

"Hey, Mom. Where are all the pictures of me?"

I looked up briefly from the pan of vegetables, "They are in there, honey. Keep looking."

I sighed, wiped my hands on my apron, and leaned over him. I flipped a couple of glossy pages, then pointed, "There. See?" I moved back to my pan of broccoli.

I bent to put the pan in the oven, "Behind your sister and brother. That small head in the background. That's you."

And if we recollect how we responded to our kids' medical emergencies, we will undoubtedly find some stark differences from one to the other, as well.

My first child, daughter Chelsea, had a wonderful lady pediatrician from Calcutta, Dr. Pravesh Thapar. We got to know her well, as we saw her often.

I would hustle Chelsea in with a mild fever, or a scrape, or a mysterious bruise — because let's admit it, with your first kid, it is either a cold or leukemia — and dear sweet patient Dr. Thapar would inspect my baby's chubby body parts and declare, "Oh, this is a very healthy baby!" and send us home.

Second child, son Nick, saw Dr. Thapar a little less, but I still buckled him into his car seat, tucking his big sister into the booster seat next to him, and raced him over to the doctor's office a lot. Certainly more times than when anything was actually wrong with him. Poor long-suffering Dr. Thapar.

When son Duncan came along, we had a different lady doctor. If I remember correctly, we visited her when he was born and when he required immunizations.

When Duncan cried about something, I would eventually stop whatever I was doing, wander over, and inspect the boo-boo at which he was pointing. I would feel his head, administer a baby Tylenol, or apply a Bandaid, or give him a popsicle. He is a tall, broad-shouldered strapping man today. It worked out just fine.

Recently, I had to smile when a neighbor brought over her first and only daughter. When I asked how old the baby was, our friend said with a glowing smile, "25 months."

Not a little over two. Not two-ish. Twenty-five months.

I was once this parent. Most of us were. Some of us still are.

Years ago, I watched a middle-aged comedian on the Tonight Show. He said when her friends asked his Jewish mother how old he was, she replied: "542 months."

I remember snorting my wine out of my nose then. It still makes me smile now.

Because I could probably tell you how many months my first child has been alive (390, just saying), but if you ask me how old my youngest child is, I find myself having to stop and think, and count back from his older brother's and sister's birth years.

(Side note to my darling youngest son: Not to worry. I exaggerate. I know you are 26. Almost 27. Somewhere in there.)

Yesterday, when I ran into a girlfriend at the grocery store, and asked how her son was doing, she responded surprisingly like our neighbor with the new-ish baby girl, and with a similar glow of pride. She answered, "My son has been 25 months clean and sober."

It occurred to me that as parents, we are lucky and blessed if circumstances allow us to become relatively relaxed or blasé about our kids. When one or more of our kids have become addicted to substances — as so many of our children have — that changes.

After we have spent years, months, weeks, days, hours, minutes worrying about them, that first day of sobriety does indeed feel a lot like a new birthday. It is our child's re-birth day. And just like when they were newborns, we precisely recall and count each day, week and month afterwards. Each moment is filled with a dual reality: the realization of the fragility and preciousness of his or her life, and the daily dread that it will self-destruct, or God-forbid, end.

If there is a silver lining to being the parent of a recovering addict, perhaps it is this re-sharpened focus on the miracle of just having them around. We no longer care that they haven't achieved what the world would consider "success;" we are just grateful they are alive and breathing. We newly appreciate the simplest of things as the amazing gifts they are: that we know where our child is, that they are safe, that we were able to hear their voice, or see their face, that day. That they are sleeping in a warm bed, with clean clothes, have had a decent meal, and are not surrounded by danger, that night.

We never expected our babies to prove anything to us, to impress us, or earn our love. We just adored them, exactly as they were. These tiny chubby beings — stinky, poopy, boogery, cranky, demanding — ruled us completely. We jumped at their every sound, because of that one truth: they were ours, but not. They were on loan to us from God, and the joy of loving them was conjoined with the terror of losing them, like intertwined strands of seaweed in the surf.

There is no possibility for complacence when your child struggles with addiction. We live between the extremes of breathless fear when they are engulfed by it, and hesitant elation when they fight it, even and especially when we see that they must choose and re-choose, every single day.

We probably have stopped photographing each and every facial expression, and may panic a bit less when they are sick or hurt, but that deep relief that our kid is alive and well never leaves us. And without meaning to, we parents will always silently count out our children's lives, one day at a time.