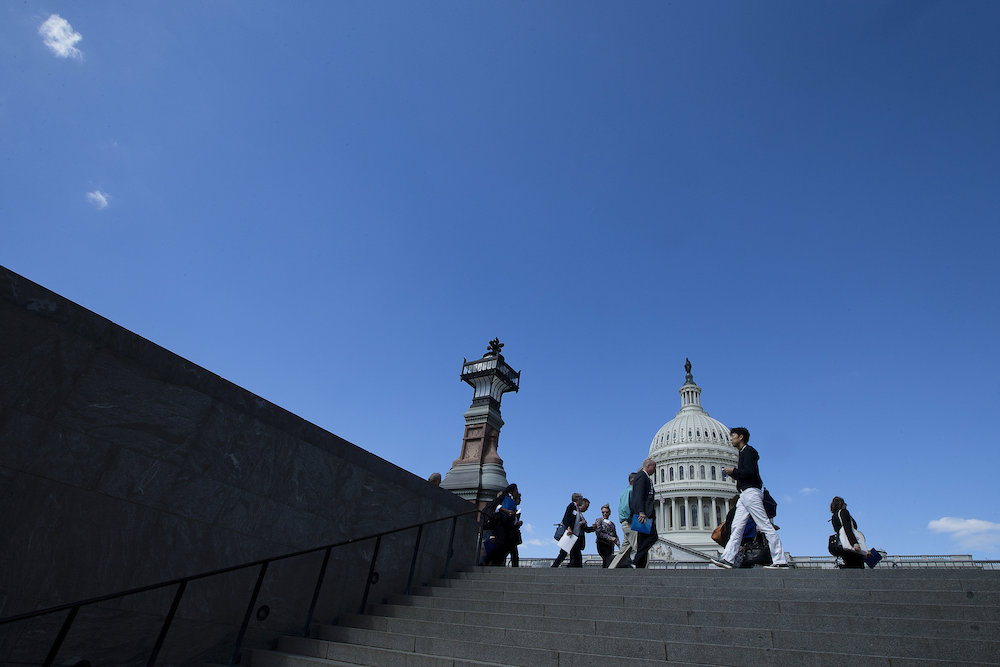 People walk near the U.S. Capitol in Washington May 3, 2017, the day before President Donald Trump signed his Executive Order on Promoting Free Speech and Religious Liberty at the White House. (CNS/Tyler Orsburn)

Religious liberty has become a wedge issue among many conservative religionists and politicians. President Donald Trump and Franklin Graham, Billy's hard-right preacher son, are among those raising alarms that America's religious rights are threatened by secular antagonism. At worst, it's an implication that Democrats promote a worldly, anti-religious force trying to thwart moral application of religious convictions.

Under that same rubric, liberalism is also accused by the conservative alliance of mostly Republicans and right-wing evangelicals of denying rightful expressions of faith by banning public displays such as Christmas mangers and Easter pageants in civic schools. Related pleas appeal for the right to mount Ten Commandment plaques and other biblical quotations on office walls.

The most publicized case involves whether a Christian whose beliefs reject LBGT equality must sell a wedding cake to a same-sex couple. One baker has refused and a challenge awaits final judgment. Other trials of religion-free public space work their way through the system.

Primary reasons for these defensive reactions are efforts by religion to regain ground it's lost to attrition in recent decades and to exert control never given in the Constitution. Adding to that struggle to recover influence is the increasing competition from growing numbers of world religions such as Islam, Hinduism and Buddhism. American churches once had virtual monopoly over the cultural climate; that no longer exists, and the old establishment is troubled. Most of the trappings once accepted as a natural part of the landscape have disappeared, and conservatives have revolted.

What the conservatives want to recover has almost nothing to do with the Constitution's religious rights. Those are privileges granted by a society that deferred to them as the only spiritual game in town. During a period of secularization, these accretions have rightly been questioned and stripped away. We have returned to the legal definition: freedom to be religious without infringing on others' rights.

The First Amendment says the government cannot set up religious groups or stop citizens from believing what they choose in whatever setting they choose. The phrase has a universal meaning that also contains room for interpretation. Both the "establishment of" and the "restrict not" sides have been defined variously by lawyers in the interests of various advocates of particular views, but in general, the provision has served the purpose of keeping the U.S. government from founding a state church or preventing people from joining the religious community that serves them best.

There have been stiff abuses on both sides, of course, rooted in the human instinct to favor and expand one's own interests and the government's reflex to privilege religious movements that reinforce its aims. Undoubtedly, Christianity has harmoniously supported democracy's values, with some brief exceptions regarding war and race, though in doing so it has sometimes allowed traditional convictions to be distorted or contradicted.

Religious liberty, constitutionally defined, in no way prevents religions from preaching ethics and principles from the rafters and seeking changes in law, but doesn't absolve it from punishment for breaking the law, fairly or unfairly. Jehovah's Witnesses were persecuted for decades for refusing to salute the flag, a policy that now seems unjust by most Americans. Vietnam War protestors who burned flags and refused induction won admiration among other war opponents precisely because they were willing to be "conscientious objectors" (usually on religious grounds) who accepted consequences of breaking Selective Service laws.

Roy Bourgeois, the stalwart former Maryknoll priest, sacrificed his wellbeing for many years by decrying the training of Latin American counter-revolutionaries ("freedom fighters" in official Orwellian terminology) at the military's School of the Americas in Georgia, returning there again and again, arrested and jailed repeatedly. Ironically and painfully, Bourgeois was eventually dismissed from his order not expressly for that resistance but for another of his causes inside the church, the ordination of Catholic women.

The actions by the religious and political "religious liberty" crusaders in this country operate on a false premise — that our spiritual freedom includes the right to break the law with impunity: to be able not only to preach their points of view but to subject those with whom they conduct regulated interactions who disagree with certain convictions to special penalties. Using the wedding cake analogy, it would be like saying Christians who abhor adultery or theft could deny service to those whom they believe transgress those commandments.

The Supreme Court banned two major privileges, school-sponsored Bible reading and prayer, on grounds that the practices boosted some religious traditions while implicitly degrading others. The "right to choose" abortion remains legal but threatened. Religious foes of those practices have every right to win over the general public through legislative means from their vantage points. So far, public opinion shows a relatively stable level of support for a woman's right to choose, implying failure, so far, of the attempt to couch the anti-abortion cause as a matter of religious liberty.

A scant majority of white Catholics and 81% of white evangelicals voted for Trump largely on the basis of that single issue, however. Trump's promise to rid the country of legalized abortion through Supreme Court picks appears to have been a powerful incentive to support a candidate who otherwise stood against a clutch of issues such as poverty and racial bias that are integral to Catholic theology and totally outside the realms of protecting assumed privilege.

Catholics have a proud history of surviving a long period of bigotry and converting Catholic social teaching into law. Changing society legitimately in keeping with Catholic principles. It is quite the opposite of the current claims that de factor privileges such as discriminating against LGBT people or refusing a woman's right to choose are religious rights in the Constitution.

Protestant rebuffs of the alleged crisis of religious liberty are perhaps more telling, given the deep sense of religious proprietorship within those ranks. The Barna Group, an important Christian research center, recently did in-depth interviews with a cross-section of 547 Christian ministers and found only 23% believed religious liberty was a major concern. A third (32%) thought it was no concern at all.