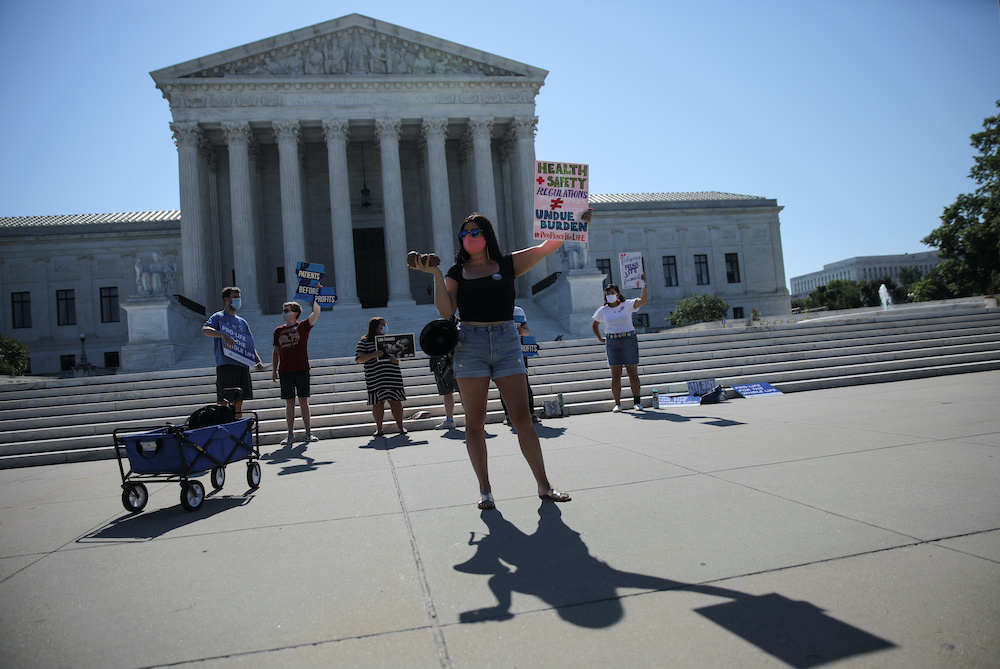 A fresh survey on abortion from the University of Notre Dame attempts to separate itself from other polls that regularly graph the public's deep split over its practice by gauging the more subjective side, how people feel about its legal and moral aspects, based on their backgrounds as parents, citizens, believers and unbelievers.

Given that it's a valid survey sponsored by a wholly pro-life university's McGrath Institute for Church Life, it isn't a stretch to assume that its purpose was to find wedge issues that might help shift attitudes to its side.

So the interpretive analysis goes. But in the process, it creates problems for itself and looks like a refill of a failed cure.

The project presents itself as "the largest known in-depth interview study of 'everyday' Americans' attitudes toward abortion." A total of 217 subjects, representative of American religious groups (41% Protestant, 21% Catholic) and unbelievers (whopping 27%), underwent 75-minute interviews by a team of sociologists. A survey summary says they were "ordinary" folks, unlike in abortion studies that enlist those with special interests on the subject. Women (118) outnumbered men (99).

The plain scorekeeping results basically duplicate those from other recent surveys. Regarding legality of abortion, 35% favored no restrictions, 51% would allow it under certain conditions, and 14% were totally opposed. On that basis, ending abortion appears to be unwanted.

On the moral scale, nearly a third believes abortion was always acceptable (29%), while 38% would sometimes think it was; 33% thought it clearly immoral.

Though nothing surprising emerged from these opinions, which the survey's leader — Tricia Bruce of the university's Center for the Study of Religion and Society — identified as political and legal, the more personal range of views became the source of the team's claim to a new frontier.

Among other breakthroughs, the team says it extracted from the interviews that: people don't talk about abortion very much and no one had really asked them about it before; they believe the terms "pro-life" and "pro-choice" oversimplify the debate; making decisions about abortion wasn't, as usually portrayed, for political or "rhetorical" reasons but a deeply personal process; and many subjects didn't know very much about the biology of abortion. Finally, people are troubled by abortion.

Such findings are common sense or overreach. But they become seeds of strategies that sound like previous failed efforts to spark Catholic opposition to abortion.

A prime hypothesis is that the evidence points to a need to educate those who have fallen astray of the church's absolute law. Dissenters presumably arise from misunderstandings of church teaching. More and better catechetical instruction could straighten them out.

Similar reasoning arose in earlier decades when steep increases in Catholic dissent from the church's sexual ethics, primarily the ban on artificial birth control, were rattling church leadership. The ignorance tag was ineffective then and would almost certainly be now.

Dissidents then and now largely see themselves as well aware of what the church teaches, aren't interested in re-education, and often consider the approach patronizing. These are Catholics with growing levels of education who live in a complex world alien to the clergy's everyday experience and may invoke the Vatican II reemphasized role of conscience as the highest authority to come to difficult but heartfelt decisions on birth control, premarital sex, divorce and abortion.

It appears, therefore, that there's not much room for negotiation on the grounds that they're being invited to one-way appeals rather than genuine dialogue. On one side are clergy and others who stand for fixed moral laws. On the other, lay people with mixed stands. No wonder, then, that laity aren't eager to enter a discussion whose premise is that they are "wrong" and the purpose of which is solely to change their minds. So it's not surprising that they might not want to talk about something as personal as abortion.

A discussion that allowed for mutual influence and learning might get somewhere. And arguably there is need for further education by all sides. That would signal openness to compromise. Failure to do so contributes to escalating distrust between the laity and ordained — spiking dramatically after clergy sexual abuse scandals — and remains a potential source of further estrangement. Free and open dialogue between acknowledged equals could help narrow that gulf.

As matters stand, only laity can give ground. Even if those on the no-compromise side were to be personally swayed by dissenters' reasoning, they would be expected to uphold the no-exception doctrine of the official church.

The recent spotlight on the Supreme Court's ruling that employers, including Catholic institutions, can leave birth control prescriptions out of their health insurance plans underscores the stalemate. Not surprisingly Catholic leaders, including the president of Notre Dame, hailed the ruling as a victory for "religious liberty."

Who's religious liberty? Three-fourths of American Catholics believe the church's ban is wrong. That means substantial numbers of Catholic employees lose their coverage, including faculty and staff at universities such as Notre Dame, who believe their approval of birth control methods to be honestly arrived at within their faith. But their position is thoroughly discounted.

The survey team implies that their subjects' discomfort with abortion might be a wedge issue. But does anyone, whichever side you're on, feel pleased by abortion? Could it possibly be used to separate the two sides in the dispute?