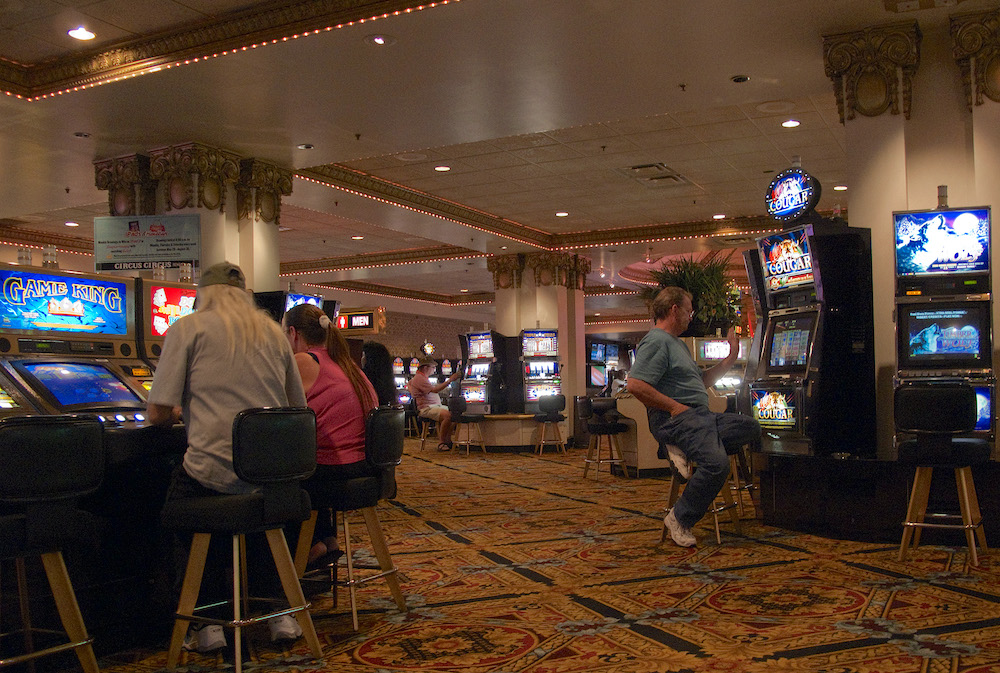 What do you think is the leading threat to America's moral fabric? Child abuse, laziness, ego mania, racism, poverty, greed, atheism? My pick is perhaps less obvious, a subtle but growing force that imperils souls and kindles greed: gambling.

That obsession has grown tenaciously, often covertly, into a force that helps instill a strain of individualism without empathy, a strain of self-seeking that can be seen as a component in a drift toward self-seeking cited by social and political analysts as a major cause of our country's political bickering and hostility to legislation aimed at reducing the rich-poor gap and improving justice and social welfare of the less fortunate.

Meanwhile, the spread of this alluring escape continues at a galloping pace, spurred lately by the explosion of legal sports betting. The promise of getting "real lucky" looms everywhere you turn.

Indeed, with its assorted tentacles, including local lotteries and online wagering, the games of risk have with lightning-like speed woven themselves into the mainstream of civic life with astonishing stealth and dazzling public relations. Not as a ravenous dumping ground for personal savings, visions of elusive riches or ruined lives, of course, but in the guise of respectability and good clean fun. Nothing at all to be concerned about, they imply: Salvation is only a ticket or a roll of the dice away. And, to boot, how about those fabulous gifts their owners bestow on charities and pour into government tax coffers?

Then there's the enduring claim that gambling becomes a "regressive" tax, exploiting disproportionate amounts of funds from those who are least able to afford to lose. The odds always favor the house, however the exceptional winner gains the spotlight. Dreams of jackpots can appeal most to those with great financial anxieties who may ignore the reality that the system is rigged against them.

Gaming for personal and public gain goes back the nation's founding (and during British occupation). From the first, the new country depended on trading chancy securities and bonds. Most colonies ran lotteries and similar schemes at one time or another to supplement their budgets, despite objections from religious leaders.

The Catholic Church has been part of a strong religious consensus opposed to the social damages fostered by gambling but takes a more tolerant view of gambling itself than do many churches. Ubiquitous bingo games to help support parish schools and other needs have widely identified this degree of acceptance, reinforced by the official catechism's assurance that games of chance as such aren't wrong (#2413). But it warns that effects such as self absorption, greed and money-loving are sinful. A quip attributed to St. Augustine's lingers in that assessment: "Satan invented gambling."

Such opposition grew during and after religious revivals of the 19th century, resulting in a sharp reduction in gambling operations. Its popularity waxed and waned by region during the 20th century, marked by race track enthusiasm and networks of numbers games, but the turning point was New Hampshire's founding of the modern state lottery in 1964. While that jump-start might have seemed unusual in a state with its roots in early New England piety and regional distaste for gambling, the state was among the nation's most tight-fisted and least willing to support social and educational services. New Hampshire supported neither an income nor sales tax but was eager for volunteers to chip in — which seemed ironically like the hated "hand-outs" from outsiders. Up to then, gambling was tolerated as recreationally marginal with considerable disapproval of the principle of the thing.

As a boy in neighboring Massachusetts, I heard attacks on the familial and social ills attributed to gambling from church pulpits as a woeful impulse to "get something for nothing" and to steer hard-earned money from working-class people into what was described as a corrupt, predatory strategy — preying upon the hard lives of poor people. 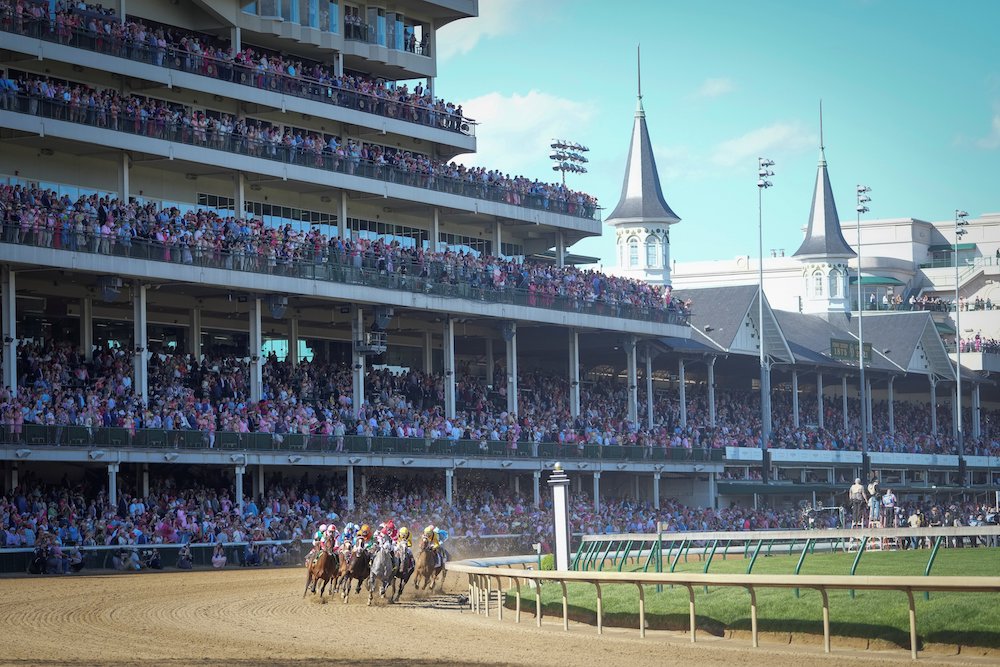 Crowds cheer as the field of horses round turn one at Churchill Downs April 30, 2021, during the Kentucky Oaks race a day before the 147th running of the Kentucky Derby. (CNS/Reuters/Bryan Woolston)

New Hampshire's initiative began to shift toward acceptance of a tactic still widely thought shady but appealing as a cheap revenue-raiser that could reduce citizens' own taxes. At any rate, increasing acceptance of that basic formula triggered a string of similar state-run lotto campaigns with winning tickets drawn on television. The proliferation of gambling styles has made quips such as "when I win the lottery" part of the language and renders the moral qualms from my boyhood quite laughable. The buying of lottery tickets, a night at the riverboat casino, joining the weekly office pool, clicking onto an internet card game have become normal routines, among others, virtually without stigma. It's the way we choose to live now. Casinos have mushroomed across the country, numbering over 1,000, closely divided between those that are commercially and tribally owned.

The meteoric rise of gambling has continue apace, having moved the phenomenon from the periphery to the center of attention. Among the biggest steps in the surge is the advent of widespread legalized sports betting. Sports talk shows on radio and television and ads on billboards and electronic gadgets pump out a steady stream of betting options on everything from a golfer's putting performance to a hockey player's penalty minutes. The response has been predictably high among the millions who live and die sports.

A grandfather I know mentioned that during a high school basketball game he attended, his recently college-graduated grandson spent much of his time on his iPhone deciding where to place his money on an ongoing pro basketball game. He had money on the winner, but there remained, he said, 132 other choices on such questions as how many points a certain player might score in the upcoming second half.

While sports wagering once had a sordid history of point-fixing scandals to rig games, caution has quickly gave way to the prospect of personal bonanzas. The possibility of trouble is far from the excitement of crowded sports bars rimmed with video displays of current games and ready access to betting agents. Heaps of money can ride on an intentionally missed shot, but no matter.

Sports betting presumably has special marketing appeal to legions of younger gamers who retain fierce loyalty to college alma maters and home teams. Like other players, they will take matters in their own hands for their own benefit.

Decades ago, gambling was mostly occasional. Now it's a wrap-around, consuming pursuit for a much greater audience fed by video, audio and government-paid ads. It's possible to become immersed in gambling 24 hours a day,

The shadow side of this frenetic gambling craze, crippling addiction, is generally regarded as a real but small price for doing business. Many players point to the advertised benefits of gambling, the tax revenues exacted for voter-pleasing items such as education and senior citizens. 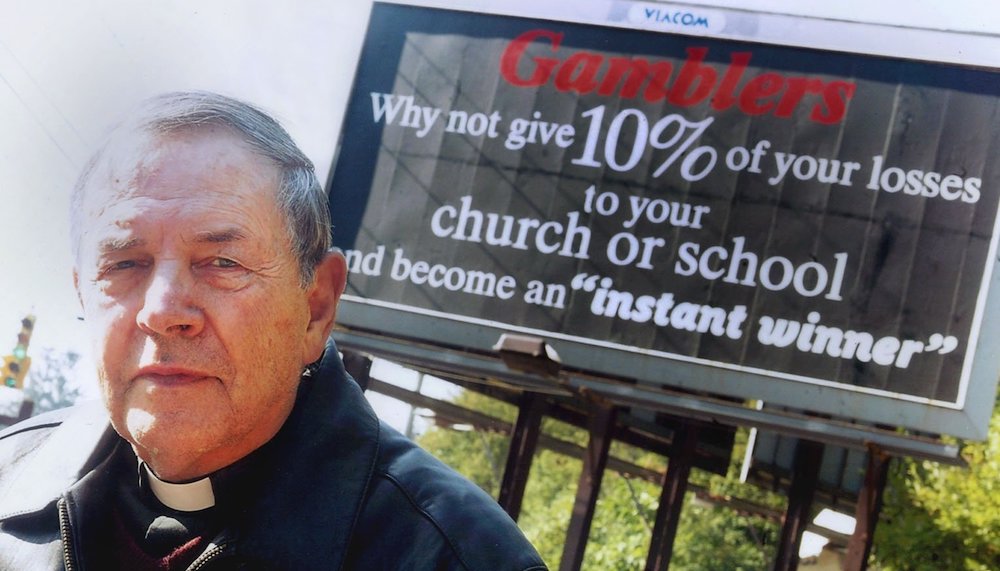 Fr. Edmund Nadolny, pastor of St. Stanislaus Church in Meriden, Connecticut, is pictured by one of his billboards in 2004. (CNS/Record-Journal)

A rigorous study, "State Revenues from Gambling," by the Nelson A. Rockefeller Institute of Government in 2016 drew a somber conclusion ("Short-term Relief, Long-term Disappointment" was the report's subtitle.) Gambling revenue "represents between 2.0 and 2.5 percent of state owned general revenues." It added, "the gambling industry is a significant contributor to politicians and political parties and plays a central role in the political process."

So far as I can detect, possible harm to the community is rarely if ever considered, even as the thrill seeking public seldom questions any aspect of its bitter fruits.

The most profound impact of this staggering profusion of gambling "entertainment' is mind control, the idea so prevalent in the culture, that the self is in control, is responsible for getting a plentiful share of life's goods and protecting that store against those who would take it away, either to redistribute it to those with less or to render us helplessly alone. We thus give aid and support to a nation of personal silos with scant human connection, imbued with the falsehood of self-sufficiency, getting and spending.