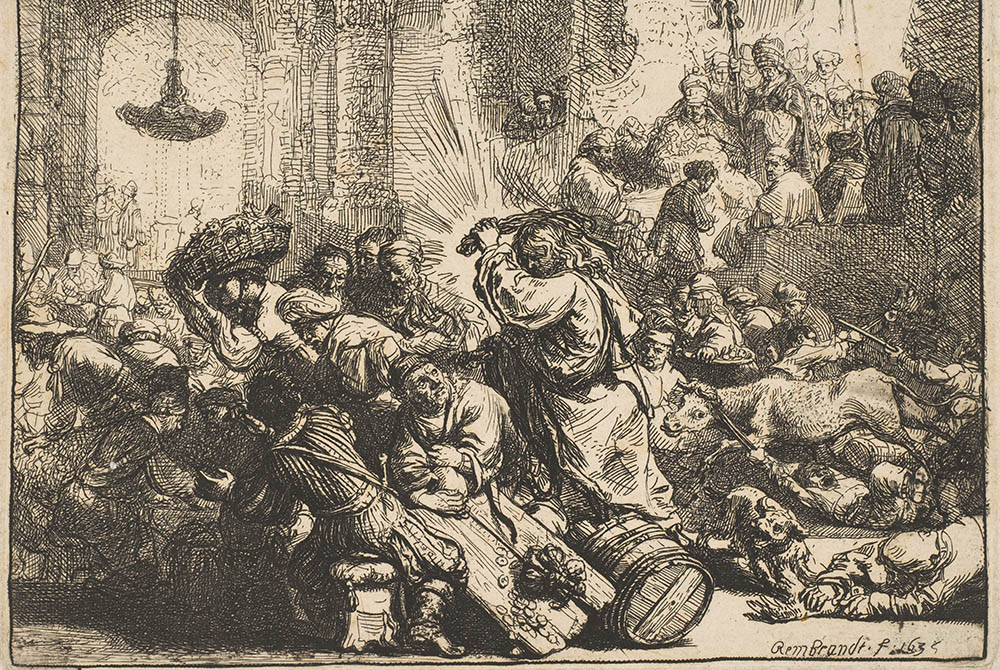 "Christ Driving the Money-Changers from the Temple," by Rembrandt van Rijn, a 1635 etching (Metropolitan Museum of Art)

Some people might think that the purification of the temple sounds like an oxymoron, sort of like the task of wetting water. The temple should be the place of purification, not a place needing to be cleansed. Unfortunately, that attitude is at best naive and in worse scenarios it reflects the culture of "excessive deference and assumption of moral superiority" called clericalism.

Pope Francis has given considerable attention to the problem of clericalism, warning young priests and seminarians about the danger of becoming "little monsters" unless they form their hearts as humble servants. Ominously, similar dangers lurk for most of God's people. We are all susceptible to the prejudicial "isms" that divide our society by rank, race, class, education, gender, age, etc. While the "isms" cause significant suffering for their victims, they also dehumanize their practitioners.

Ironically, the clericalism of non-clerics can also include the insidious expectation that while "religious" people are expected to meet the high demands of the Gospel, ordinary people can be excused for capitulating to the demands of a dog-eat-dog, consumerist world. Such religious compartmentalization provoked Jesus' disgust with the temple of his day.

Picturing the purification of the temple, we tend to concentrate on the whip, the animals and the frightened, fleeing money changers. But Jesus delivered his real message with that fatally misinterpreted line, "Destroy this temple and I will raise it up again in three days."

People saw the temple as the locus of God's presence among them. By creating mayhem with his whip, Jesus declared that the temple had been degraded into everything except a dwelling place for God.

Over the centuries, Jesus' prophetic action has been replayed by beggars like Francis of Assisi, monks like Martin Luther, bishops like Francis of Rome, civil rights protesters and feminists. But driving corruption from the temple was just the surface of Jesus' message that day.

The heart of the scandal Jesus caused that day was not in driving away the money changers but his proclamation that he, a human being, was the new temple. This implied that an encounter with genuine humanity offers an experience of the real presence of God.

Of course, the Genesis creation stories prepared the way for that: One teaches that male and female were created in the divine image, the other describes how humanity came to life by the infusion of the very Spirit-breath of God. But it has always been easier to imagine God safely confined in a church and speaking only through authority than to believe that God's life courses through creation and speaks in the voice of unruly prophets and our needy neighbors. We join ranks with those who rejected Jesus' message to the extent that we allow a focus on Christ's presence in our temples and tabernacles to dwarf our awareness of his real and much more disturbing presence outside the church walls. The host in the tabernacle is silent, but the prophetic poor tend to clamor for justice, dignity and even love.

In today's first reading, we hear a compilation of the Ten Commandments. Many people are unaware that Catholics and Protestants divide the commandments differently. Whereas Catholics count three commandments about reverence for God and seven that refer to our treatment of others, many Protestant denominations see the commands "you shall not have other gods" and "you shall not carve idols" as separate. Thus, "you shall not take the name of the LORD in vain" becomes the Third Commandment and "remember to keep holy the Sabbath day," the Fourth Commandment. After combining the first two, Catholics separate coveting the neighbor's goods and spouse as the Ninth and Tenth Commandments; Protestants count them as a single command.

In the bad old days of Reformation fighting, this division allowed the Protestants to demonize Catholics for the idolatry of worshipping statues and may have helped Catholics put extra focus on sexual morality. Both interpretations offer ample opportunities for condemning others.

Jesus denounced a temple that concentrated power in service of the privileged, took advantage of some, and condemned and excluded others. He claimed that his mission was to fulfill the law — to demonstrate its deepest meaning as a guide to loving like God loves. In that, he revealed how God's foolishness and weakness is wiser and stronger than human ways.

Today's readings call us to examine how we measure sacred and profane. Do we reverence each person as much as we do our holy places? Do we allow our critiques of church leadership to let us off the hook for living the radicality of the Gospel? Do we care more for the decor of our spaces and the style of our liturgy than for God's dwelling place in and among the poor? How are we doing at making temples of our lives?

A version of this story appeared in the Feb 19-March 4, 2021 print issue under the headline: Respect for God's dwelling.