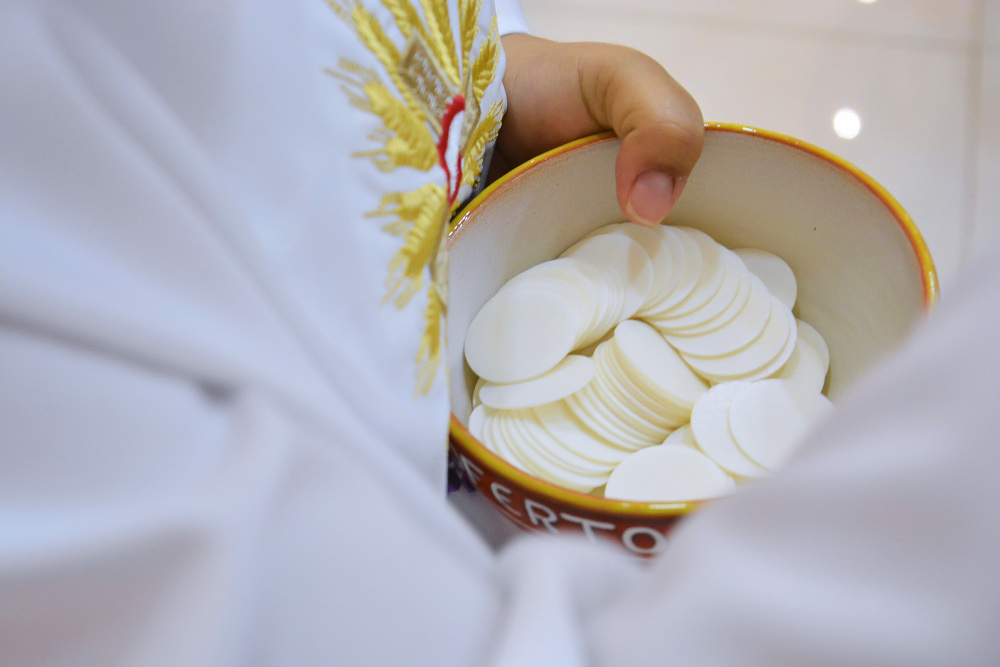 The requirement to practice social distancing means that many more U.S. Catholics are going to attend a Communion service on Sunday rather than a Mass. Many Catholics will not notice the difference or may even prefer the Communion service.

When churches begin opening, social distancing will allow fewer people to attend Mass at the same time, which means more services will be required. Granted the scarcity of Catholic priests, and their average age, there will not be enough priests with sufficient stamina to do all these services. Therefore, some of the services will not be Masses but Communion services.

A Communion service looks very much like a Mass but is presided over by a deacon or layperson rather than a priest, because it does not have a moment of consecration, which only the priest can perform. At a Communion service, you will not hear the words, "This is my body. … This is my blood. … " Instead, the deacon or layperson distributes hosts that have been consecrated at a Mass, then stored in the tabernacle until needed.

In rural areas, a priest might be responsible for several widely dispersed parishes that he visits once a month. During his visit, he celebrates Mass and fills the tabernacle with enough hosts for the rest of the month. When the priest is absent, a deacon or layperson (man or woman) presides over the Communion service.

Even in urban areas, a parish with a resident pastor might have a Communion service on a weekday if the priest is sick or away.

The Communion service begins with a liturgy of the Word that is almost exactly like that at a Mass. Songs are sung, prayers are recited, Scriptures are read and a sermon is given. Those paying attention will notice slight differences, such as the absence of references to "sacrifice," because a Communion service is not a sacrifice as the Mass is.

The noticeable changes begin after the general intercessions (aka prayers of the faithful). There is no presentation of gifts (what Catholics used to call the offertory) nor is there the Eucharistic prayer, which includes the consecration of the gifts. Instead, after the general intercessions, the presider and the community recite the Lord's Prayer, exchange the sign of peace, and then receive Communion. There can be songs at the appropriate times plus a final prayer, blessing and dismissal.

During the pandemic, of course, the sign of peace must avoid physical contact, and Communion will be administered under strict guidelines to prevent the spread of infection.

The coronavirus may force U.S. Catholics to experience what has long been a reality for Catholics in parts of the world, like the Amazon, where there are many Catholics and few priests. In these regions, Communion services are very common, although it is difficult to store consecrated hosts for long periods of time in the tropics.

Preparing the American Catholics for Communion services will not be easy.

"The faithful should be instructed carefully that, even when they receive communion outside Mass, they are closely united with the sacrifice which perpetuates the sacrifice of the cross," states the Vatican Congregation for Divine Worship in its 1973 document " Holy Communion and Worship of the Eucharist outside of Mass."

"They are sharers in the sacred banquet," the document continues, in which "by communion in the body and blood of the Lord the people of God shares in the blessings of the paschal sacrifice."

On the other hand, the Vatican and the U.S. bishops make clear that a Mass is preferred to a Communion service.

"Sacramental communion received during Mass is the more perfect participation in the Eucharistic celebration," according to the congregation. "The Eucharistic sign is expressed more clearly when the faithful receive the body of the Lord from the same sacrifice after the communion of the priest."

"Such celebrations should never be seen as an equal choice with participation at Mass," explains the U.S. bishops' conference website. "Every effort must be undertaken to avoid any confusion between this celebration and the Mass."

The necessary expansion of Communion services in the United States will likely expose how little understanding there is of the Eucharistic prayer and the difference between a Communion service and a Mass.

The Eucharistic prayer, which comes between the presentation of gifts and the Lord's Prayer, includes not only the institutional narrative (the story of the Last Supper) but also prayers of praise, thanksgiving and offering. It also asks that those receiving Communion be transformed by the Spirit into the body of Christ.

Many Catholics may not even notice its absence at Communion services. Most consider it the priest's prayer whose only purpose is to consecrate the bread and wine. Few will be disappointed by its absence; many might even be happy that its absence shortens the time for the service.

The fact that many priests prefer the shortest Eucharistic prayer (there are 12 from which to choose), recite it as fast as possible, even continuing to recite it as the people obscure his words as they drop to their knees after the Sanctus ("Holy, holy"), has not helped.

Since most bishops and priests have not spent any time explaining the Eucharistic prayer to their people, they should not be surprised if the people don't grasp the difference between a Mass and a Communion service. Many parishioners who attend a Communion service presided over by a nun refer to it as "sister's Mass," to the horror of the bishops. If the nun or layperson preaches and prays more fervently than they are used to from a priest, many parishioners will prefer that "Mass" to Father's.

On the positive side, the expansion of Communion services will contribute to declericalization of the church. It will also allow parishioners to see how well or badly laypeople can preside at liturgical ceremonies. If married men and women do just as well as the priests, we will see a growing groundswell for ordaining them.

The bishops will not want to expand the number of Communion services, but COVID-19 gives them little choice.

A version of this story appeared in the June 12-25, 2020 print issue under the headline: American Catholics, meet the Communion service.