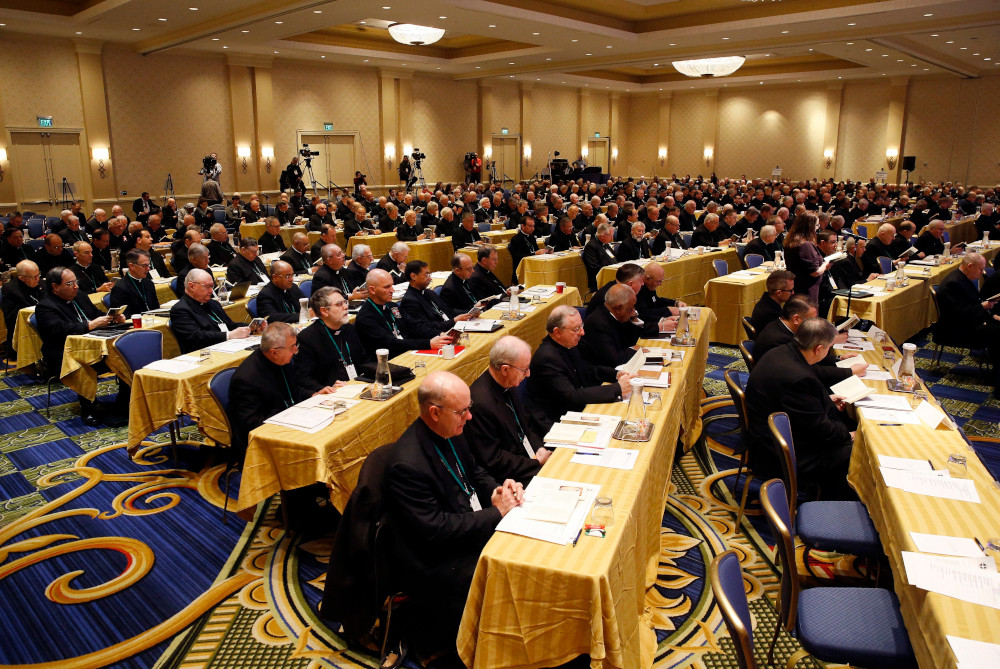 Members of the United States Conference of Catholic Bishops gather for the USCCB's annual fall meeting, on Nov. 12, 2018, in Baltimore. (AP/Patrick Semansky)

Many Americans assume the U.S. Catholic bishops are diehard supporters of Donald Trump. True, when it comes to pro-life issues and religious freedom, the bishops are in Trump's corner, but on several issues, they strongly criticize the administration.

This nuance is what sets the Catholic bishops apart from white evangelical leaders, who tend to support the president on almost every issue. Nor do the bishops as a whole endorse any candidate. Bishops as individuals, like other citizens, can legally make endorsements as long as they don't use church money in doing so. Since the bishops do not endorse candidates, each party emphasizes the points on which the bishops agree with them, especially in a presidential election.

To examine just how the bishops have responded to Trump, I looked at over 160 press releases dealing with public policy issues from January 2019 through July 2020, published on the website of the U.S. Conference of Catholic Bishops, the authoritative voice of the U.S. bishops on public policy.

There's no doubt that the bishops make a priority of abortion and other pro-life issues: More than 30 press releases addressed life topics in the past 19 months. "We are deeply grateful for the President's pro-life commitment," one release said, "and for all the actions this administration has taken to protect unborn children and their mothers from the violence of abortion."

The bishops made clear their opposition to fetal tissue research, assisted suicide, government funding of abortion, as well as their support for state and federal restrictions on abortion. They welcomed the re-institution of the Mexico City Policy "to ensure that U.S. taxpayer dollars are not used to perform or promote abortion internationally."

The bishops consistently sided with the administration on issues of domestic and international religious freedom.

Seven releases address freedom of conscience protection. They hailed measures allowing healthcare workers to opt out of performing or assisting with abortions or other procedures they see as immoral. They were also delighted by the Supreme Court's decision in favor of the Little Sisters of the Poor, an order of nuns who opposed the Affordable Care Act's contraception mandate.

Another dozen or so releases stood by the administration's positions on issues affecting LGBTQ persons. The bishops voiced opposition to the Equality Act, which would extend the discrimination protections of the 1964 Civil Rights Act to gay and transgender people, and which passed the House in May. They were disappointed when the Supreme Court, in June's landmark decision in Bostock v. Clay County, Georgia, ruled that LGBTQ individuals were covered by the act.

The bishops also commended a proposed rule change that would allow faith-based adoption agencies to decline services to gay married couples without being excluded from federal aid as a result.

In a dozen other press releases, the bishops supported expanding government aid to faith-based agencies, including education, another issue on which the bishops and the administration saw eye to eye. 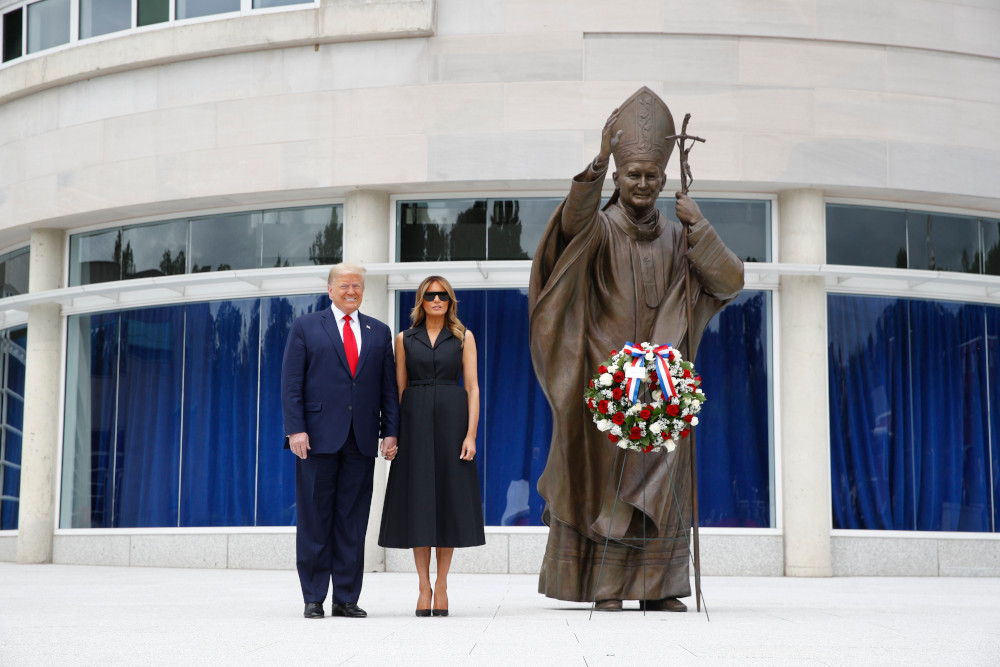 None of these points of intersection with the Trump administration policies is surprising, but they are only half the story. The bishops and Trump were often in conflict on immigration, foreign policy, the death penalty and the environment, among other issues.

In 22 press releases on immigrants and another 13 on refugees, the bishops attacked the administration's policies as "misguided and untenable," "unacceptable," "appalling," "devastating," "very concerning," "heartbreaking," "unlawful and inhumane," "terrible," "callous," "disturbing" and "contrary to American and Christian values."

These are not words used by starry-eyed supporters.

The bishops spoke out strongly and frequently in support of the Deferred Action for Childhood Arrivals program that protects from deportation those who were brought to the United States illegally as small children. "We are deeply disappointed that the Administration continues to push forward to end DACA," they said.

They consistently argued that migrants and refugees should be welcomed and treated with compassion, arguing that instead the administration's actions have "created a climate of fear in our parishes and communities across the country."

In all the bishops made more than 40 statements defending immigrants and refugees and opposing travel bans and family separation.

For example, the bishops were "very concerned" about the impact of the administration's changes in the "public charge" rule, making it easier to deport immigrants who tried to access government services.

"In our experience serving the poor and vulnerable," they reported, "we know that many immigrant families lawfully access important medical and social services that are vital to public health and welfare."

The bishops also found fault with a new rule from the Department of Housing and Urban Development that would take away housing benefits from any household with an undocumented member.

"The proposed rule would have terrible consequences for thousands of mixed-status families," complained the bishops. "It would force these families to make a heartbreaking choice — endure family separation so that eligible members can continue to receive critical housing assistance or stay together and forfeit any such assistance. This choice between unity and stability is one no family should have to make."

They railed against the facilities used to detain immigrants.

"Reports of overcrowded and unsanitary conditions are appalling and unacceptable for any person in U.S. custody, but particularly for children, who are uniquely vulnerable," said the bishops. "Such conditions cannot be used as tools of deterrence. We can and must remain a country that provides refuge for children and families fleeing violence, persecution, and acute poverty." 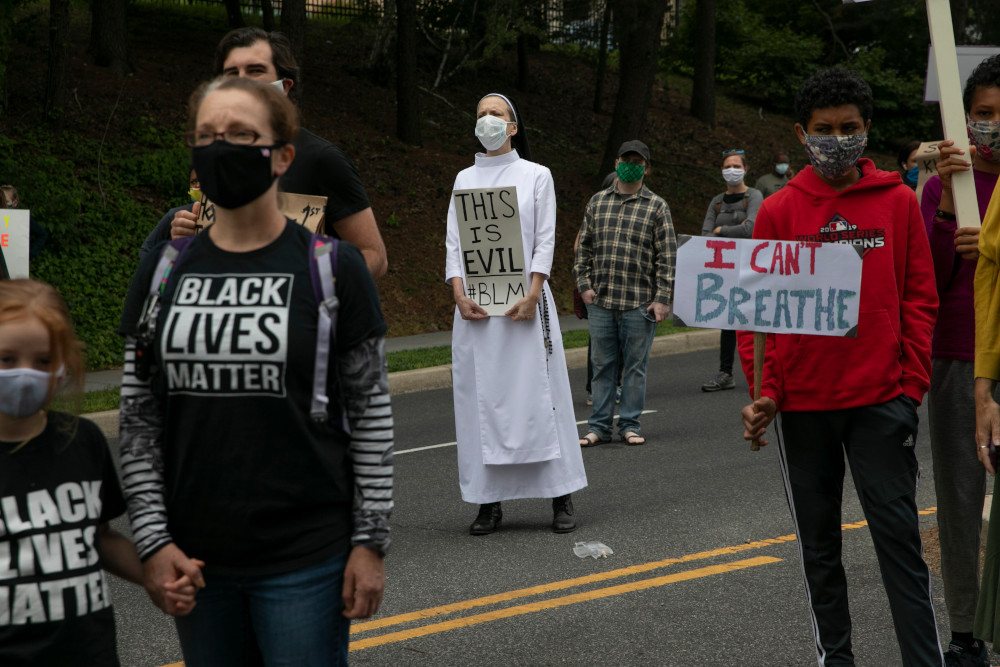 Sr. Quincy Howard, center, a Dominican nun, protests the arrival of President Donald Trump to the Saint John Paul II National Shrine, Tuesday, June 2, 2020, in Washington. Many demonstrators present said they were dismayed when Trump staged a visit to the historic St. John's Church across from the White House and held up a Bible after authorities had cleared the area of peaceful protesters. "I'm here in protest," says Howard, "of violence, of inciting violence, of systemic racism and using religion as a shield." Protests continue over the death of George Floyd, who died after being restrained by Minneapolis police officers. (AP/Jacquelyn Martin)

The bishops, along with their Mexican counterparts, also opposed Trump's wall, saying it "first and foremost is a symbol of division and animosity between two friendly countries." They were also "deeply concerned" about the president circumventing "the clear intent of Congress to limit funding of a wall." The bishops said that they "remain steadfast and resolute in the vision articulated by Pope Francis that at this time we need to be building bridges and not walls."

The treatment of asylum seekers at the border was also a major concern of the bishops in opposing new rules and regulations that "eviscerate our current asylum system."

They further noted that "the Catholic Church teaches us to look at the root causes of migration, poverty, violence, and corruption."

The bishops frequently disagreed with the administration on foreign policy as well. They opposed withdrawing from the INF Treaty and allowing the START Treaty to expire and urged more efforts toward nuclear disarmament. They called "on our national and world leaders to persevere in their efforts to abolish these weapons of mass destruction, which threaten the existence of the human race and our planet."

They also continued to encourage trade, tourism and cultural exchanges with Cuba, calling the embargo "unproductive."

And while the president was escalating his rhetoric against Iran, they called for "necessary diplomacy, courageous dialogue, and tireless efforts toward peace to resolve such global conflicts." They also stated that the unilateral withdrawal from the Iran nuclear agreement and the imposition of added economic sanctions have "exacerbated tensions with close allies and other world powers."

While not radical, the language of the bishops on "Black Lives Matter" protests is much more sympathetic than the president's.

"The killing of George Floyd was senseless and brutal, a sin that cries out to heaven for justice," said the president of the bishop's conference, José Horacio Gómez, the archbishop of Los Angeles. "We should all understand that the protests we are seeing in our cities reflect the justified frustration and anger of millions of our brothers and sisters who even today experience humiliation, indignity, and unequal opportunity only because of their race or the color of their skin."

In another release, seven U.S. Conference of Catholic Bishops chairs wrote, "Racism is not a thing of the past or simply a throwaway political issue to be bandied about when convenient. It is a real and present danger that must be met head on."

Finally, when it came to addressing the COVID-19 crisis, the bishops were most concerned about getting healthcare and economic help "for those most vulnerable: the poor, the elderly, the homeless, those in prison or detention facilities, immigrants and refugees, and those with severe underlying health conditions."

The chair of the conference's Domestic Justice and Human Development Committee said he had "sent five letters to express this touchstone principle to Congress and its various committees."

The bishops noted the need for "sufficient protective equipment for all essential workers, protection of familial well-being and integrity, additional research on the link between air pollution and coronavirus health outcomes, and the need to address disruptions to the food supply chain and its impact on farmers and farmworkers, food waste and public health."

They supported increases in paid sick leave and food security programs, including SNAP and the Emergency Food and Shelter Program.

Although they praised the CARES Act, they found it "disappointing that certain aid and relief was not extended to the undocumented, and extremely concerning that testing and access to health care coverage was denied to certain immigrants."

When it comes to abortion and religious freedom, the bishops are allies of the Republicans and President Trump, but on many other issues the bishops are his strong and vocal opponents. Catholic Democrats, like Joe Biden, are cheered by the bishops' positions on social justice, but Republicans have been much better at portraying the bishops as being in their corner.

Clearly the bishops take social justice issues much more seriously than does the president, but this may be overshadowed in the media when bishops attack Catholic Biden for his positions on abortion. The media tends to give much more attention to the bishops' disagreements with Biden than to their differences with Trump.