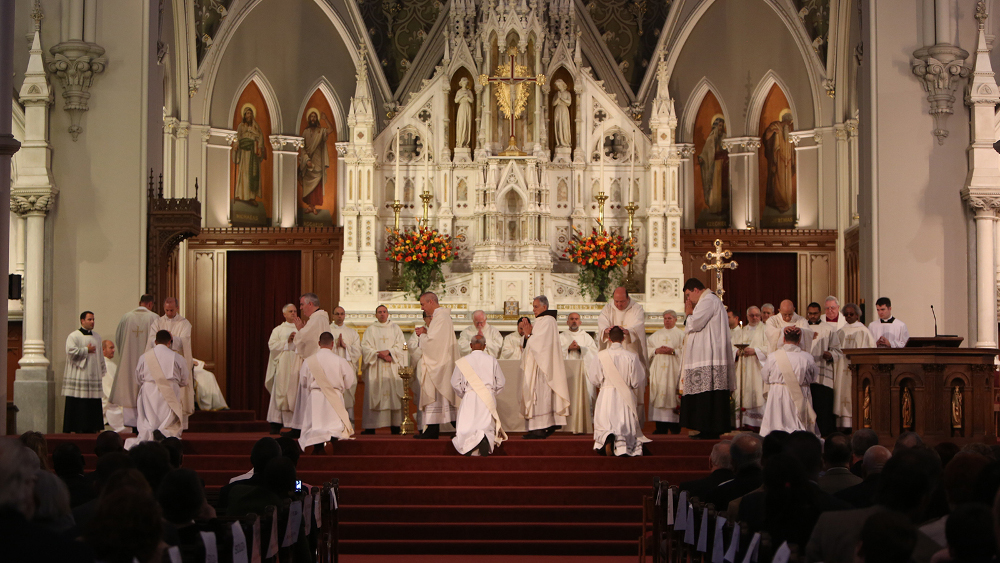 Five men, kneeling, are ordained into the priesthood on May 25, 2013, at the Cathedral of the Holy Cross in Boston. (George Martell/The Pilot Media Group/Creative Commons)

No one has a greater impact on a Catholic parish than its pastor, which is why diocesan seminaries are key to the future of the church in America. Diocesan seminaries evaluate and then form those men who want to be parish priests. Sadly, in recent decades, too many of the priests coming out of these seminaries have been trained to be authoritarians with few pastoral skills.

Some of them come to seminary with an authoritarian mindset, but faculty at today's seminaries often do little to change that. Some faculty members even foster it, teaching their students that they have all the answers and that their job is to kick the laity into shape. In these cases, seminarians are not taught to listen, to delegate, to work with committees or to empower the laity, especially women.

This is not true of all seminaries and seminarians. Chicago's Mundelein Seminary has improved under the leadership of Cardinal Blase Cupich. Some are mixed bags. Others are disaster areas.

In the worst programs, students are told not to ask questions but to consult "The Catechism of the Catholic Church," the book-length presentation of the teachings of the church prepared under the papacy of John Paul II. The documents of the Second Vatican Council are either downplayed or interpreted through a conservative lens. In too many places by too many faculty, moral theology is presented in a legalistic framework in which everything is black or white.

This has been going on in American seminaries since at least the mid-1990s, after conservative bishops had consolidated their control of seminaries. The result is that many parishioners are unhappy with their pastors.

Seminaries were one of the great reforms that came out of the Council of Trent, the long meeting of the church in the mid-1500s spurred by the Protestant Reformation. Until that time, many clergymen were ignorant and sometimes even illiterate. Trent insisted that the clergy be educated and urged bishops to set up seminaries to prepare men for the priesthood.

Seminaries also were a way of segregating seminarians from the world in order to protect and foster their vocations. Seminaries were often built in the countryside, where the seminarians could be easily protected from temptation. If they don't interact with women, they will not fall in love and leave.

Today, American seminaries are usually in cities and connected to universities, but the mentality of keeping seminarians separate remains. Their classes are often separate from other students.

In the worse cases, the local bishop intentionally staffs the seminary with graduates from the most right-wing schools. Under the papacy of John Paul II, seminary professors were screened to remove theologians who questioned church teaching, especially in the area of birth control, sexual ethics or ministry.

In the past 20 years, priests who were nostalgic about the pre-Vatican II church and liturgy were welcomed on seminary faculties.

It is tempting to suggest blowing up the seminaries, hiring lay professors and integrating their students into Catholic universities. If seminarians cannot function on a university campus, they will not be able to function in a parish.

If that is all it took, reforming our seminaries would be easy.

In fact, the number of lay people on seminary faculties has increased in recent years, but their presence has not necessarily helped, since bishops have been able to find conservative laity, both men and women, to support their traditionalist agenda.

And who would choose the universities to which seminaries move? The same bishops who are controlling seminaries today.

Wherever they study, seminarians need to be in classes where challenging questions are asked and where they interact with the people they will someday minister to and with. It is harder to be clerical and patriarchal when some of the women in your class are smarter than you are. It is also important to interact with those their age who think religion is irrelevant.

In addition to taking a hard look at seminary structure and scholarship, the church needs to address who attends. The best seminary rectors complain about some of the men sent to them by dioceses. The problems, often, are the vocation directors, who may care more about numbers than quality.

Applicants do get police background checks and psychological testing before admission, but too often red flags are ignored. One psychologist involved in screening candidates was ignored when he warned a bishop not to accept a man. Within a few months of his entry, he attempted suicide. 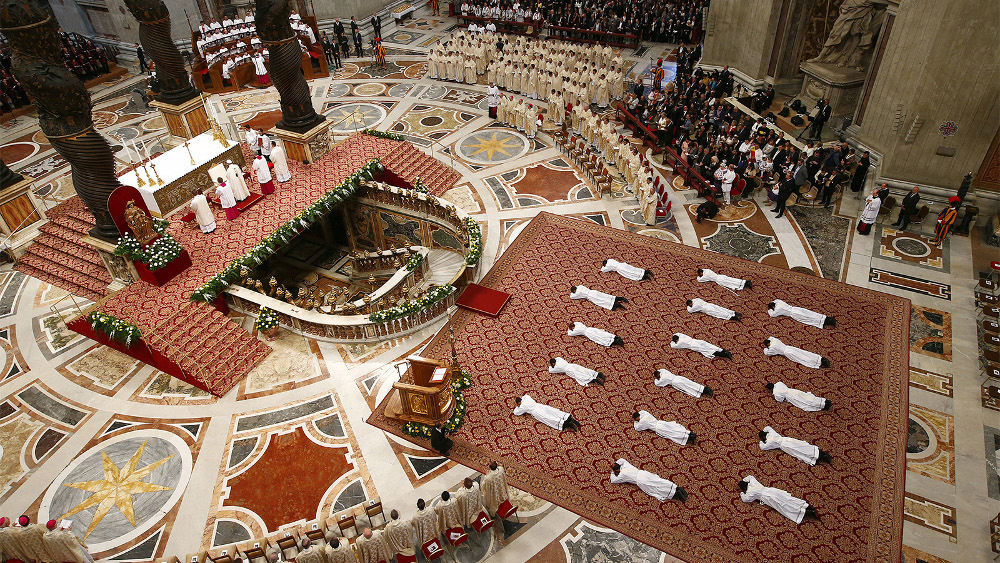 New priests lie facedown on the floor during an ordination ceremony presided over by Pope Francis, in St. Peter's Basilica at the Vatican, on April 22, 2018. (Tony Gentile/AP)

Seminary rectors are also pressured by bishops and vocation directors to keep men that the rectors and their faculty judge to be ill-suited for ministry. They often comply because if a bishop gets mad and sends his seminarians elsewhere, the seminary will suffer financially.

Bishops have been known to ordain men even when a seminary's rector and faculty unanimously recommend against it. Though only priests on the faculty can vote on a candidate for ordination, bishops sometimes think they have been too harsh in judging candidates. (They are anything but harsh.) Some bishops are so desperate for priests that they will take almost anyone.

The obvious way to increase the candidate pool would be to allow married men to be priests, although conservative bishops would still be able to find conservative candidates to admit.

It would help if the laity had a say in who serves them as priests. The lack of lay involvement in the screening of candidates for the seminary and ordination in most dioceses is not good for the church.

One innovative program developed in the St. Paul Seminary in Minnesota and being adopted at Mundelein Seminary in Chicago is a pastoral field education program for seminarians in parishes. The key difference between the structure of this program and the usual pattern of others is that seminarians intern in the same parish for four years, with a dozen or so laity involved regularly in their evaluation.

Catholic seminaries need more than minor tinkering. Screening needs to weed out not just criminals — child molesters — but those who are incapable of developing into compassionate priests. The formation program should be challenging intellectually but also develop pastoral skills necessary to not only minister to people in need but also empower the laity to take ownership in their communities.

This is not an easy task, but it is made more difficult by many bishops who prefer the status quo. I fear we will not see much change in seminaries until Francis has time to appoint more new bishops. It could take another five years before we see real reform of diocesan seminaries.