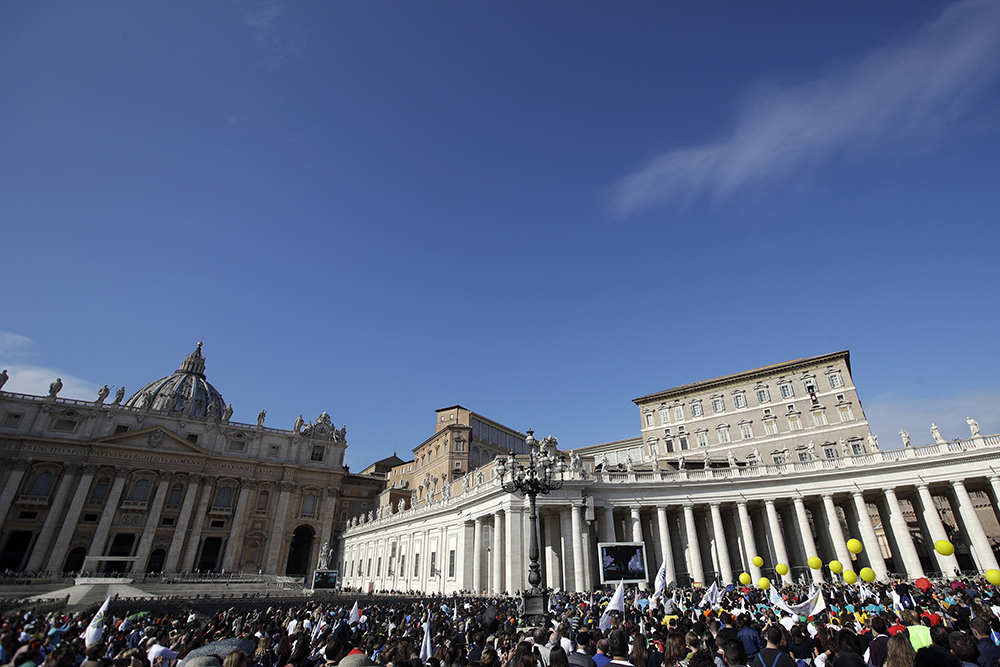 People gather in St. Peter’s Square at the Vatican as Pope Francis recites the Angelus noon prayer from the window of his studio, top right, on Nov. 1, 2019. (RNS/AP/Alessandra Tarantino)

If you have to ask a Jesuit to straighten out your finances, you are in big trouble.

Yet that is what Pope Francis has done.

True, some of us can balance our checkbooks, but that is not our charism.

In the late 1980s, I was handed the books by the director of a Jesuit think tank where I worked, because he knew I had written a dissertation on the politics of taxation and worked for a tax reform lobby. He figured I was not afraid of numbers. I used Quicken to organize the accounts into various funds matching the center's projects. It took me months to understand that a foundation grant had to be listed as a liability, not an asset.

When I arrived at America magazine in June 1998, the books were kept in a homemade DOS-based system that only two people at the company understood. It could not create intelligible reports or even print checks. I decreed that in the new fiscal year, a month after I took over, we would begin using QuickBooks. Everyone in the business office hated me. My biggest mistake was not forcing them to take classes in QuickBooks; they said they could learn it on their own. I ended up teaching it to them.

The point being that among Jesuits, I have been considered almost a genius when it comes to finances, when in fact I was just a glorified bookkeeper. That is why Jesuit institutions hire laypeople to take care of finances. Presidents of our high schools and universities must understand enough to know how to keep out of the red, but the details are left to lay finance officers. Finances and budgets are reviewed by lay boards of trustees.

So when Pope Francis asked Spanish Jesuit Juan Antonio Guerrero Alves to be the head of the Vatican Secretariat for the Economy, the job formerly held by Cardinal George Pell, who was convicted of child abuse by an Australian court, I had one reaction: Good luck, Juan, I will pray for you.

Vatican finances are complicated, but it is not rocket science. Many U.S. universities have larger operations.

As I explained in my book "Inside the Vatican," there are multiple financial units in the Vatican. The biggest are the Vatican City State, the Holy See (Roman Curia and the Secretariat of State) and the Institute for the Works of Religion, known as the IOR, or Vatican bank. There are numerous other pockets of money, but these are the big ones.

The Vatican City State is analogous to the nonacademic entities at a university: buildings and grounds, security, stores, museums, etc. With more than 1,000 employees (mostly lay and Italian) and contracts for supplies and services, there is potential for corruption.

Within the Holy See itself, the Roman Curia is a glorified bureaucracy for dealing with internal church issues. There is limited opportunity for corruption here — the church no longer sells indulgences or annulments — although the Curia’s Congregation for the Evangelization of Peoples has money, officially designated for the missions.

Including the Secretariat of State, the Holy See has more than 2,000 employees, both lay and clergy. Recently, the secretariat has been embroiled in controversy over real estate investments in London.

The Vatican bank takes deposits from religious entities and Vatican employees and invests the deposits.

The Vatican bank was the source of much bad publicity in 1982 with the Banco Ambrosiano scandal and accusations of money laundering. At the cost of millions of dollars for consultants, including forensic accountants, the Institute was cleaned up. Sadly, other parts of the Vatican were not. 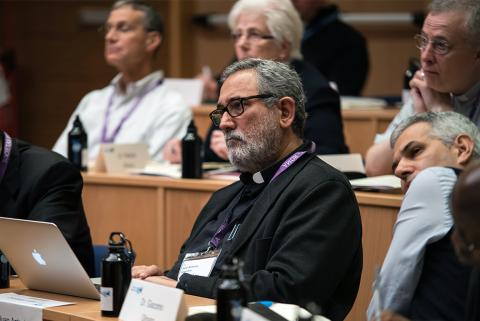 Handling the payroll and paying the bills is APSA, the Vatican finance office. It also takes care of the Vatican portfolio of investments, including stocks and real estate. Lots of opportunities for mismanagement and corruption here.

Many have tried to clean up Vatican finances.

Many non-Italian critics of the Vatican blame its problems on Italian culture, where corruption is not uncommon. When John Paul II became pope, he appointed non-Italians to all the major Vatican financial offices, including American Cardinal Edmund Szoka, who served as president of the Prefecture for Economic Affairs from 1990 to 1997.

Szoka never had authority over the bank, but he did establish the first chart of accounts and did the first comprehensive financial report of the city state and the Holy See. He distributed the reports to bishops around the world. He experienced fierce opposition in the Vatican and many of his reforms began disappearing after he left the prefecture.

By the time John Paul died, the Italians were once again in control of Vatican finances.

At the beginning of his papacy, Pope Benedict XVI made a key decision for reforming the Vatican bank. He insisted that the Vatican do everything necessary to get on the "white list" of Moneyval, an international agency responsible for combating money laundering and the financing of terrorism. To get on Moneyval's white list, a country must follow set policies and procedures. Up until this time, the Vatican refused to subject itself to outside review.

In order to implement the Moneyval requirements, the Financial Information Authority was created with René Brülhart as its head. Brülhart had an international reputation as the reformer who had cleaned up the finances of Liechtenstein.

Recent reports from Moneyval have praised the progress made by the Vatican, especially in cleaning up the Vatican bank and removing APSA's ability to act like a bank. However, Moneyval was disappointed that few people have been prosecuted as a result of investigations done by the Financial Information Authority.

This progress makes Brülhart's resignation this month from the Financial Information Authority that much more alarming. He gave credibility to the Vatican efforts that no cardinal could. He did not explain his resignation, which appears to have caught the Vatican press office by surprise.

AP reports that the Egmont Group, a consortium of financial information agencies from 130 countries, has suspended the Vatican Financial Information Authority from participation in its secure communications network because the raid confiscated confidential papers that the Vatican has an obligation to keep secret. This could also put at risk numerous financial agreements negotiated under Brülhart with countries and the European Union.

Meanwhile, APSA has been accused of once again attempting to act like a bank, contrary to Moneyval policy.

The chances that the Vatican will make Moneyval's white list in the future are doubtful at best. Following Moneyval's rules, the Holy See should present an update on action taken to implement the organization's recommendations by December 2019. Moneyval will then reevaluate how the Vatican is doing.

Guerrero could not be taking up his new job at a less auspicious time. If he did not have a vow of obedience to the pope, I would recommend he say no. The only thing he has going for him is the trust of the pope, but that will only get him so far because the pope has little interest in the details of Vatican finances.

In order to succeed, Guerrero will need four things, which the pope will probably not give him:

First, absolute authority to set financial policy and enforce it everywhere in the Vatican. What is the point in having a monarchy if you can't boss people around? Papal backing of his authority is especially important because, at the request of the Jesuits, he will remain a priest and not become a bishop and cardinal like his predecessor Cardinal Pell.

Second, he needs the authority to fire anyone who does not cooperate with the financial cleanup. The Vatican, like any bureaucracy, is good at undermining reforms by ignoring instructions. A few firings would send the signal that cooperation is mandatory.

But this pope is reluctant to fire anyone, even those who work against his agenda. In addition, Italian labor law, which the Vatican tends to follow, makes it very difficult to fire anyone.

Third, Guerrero will need an unlimited budget to hire auditors, accountants and consultants. Cleaning up the Vatican bank cost millions; cleaning up the rest of the Vatican will cost even more. But Francis is a penny pincher and hates spending money.

Fourth, Guerrero must have the authority to speak honestly to the press, even if that means identifying people in the Vatican who are not cooperating or have been involved in corruption. Transparency is essential to restoring trust.

I doubt that Guerrero will get the authority to do any of these things. As a result, don't hold your breath on seeing reform. Moneyval may scare the Vatican into returning to its commitments, but that only deals with money laundering. Other kinds of corruption will be more difficult to root out.