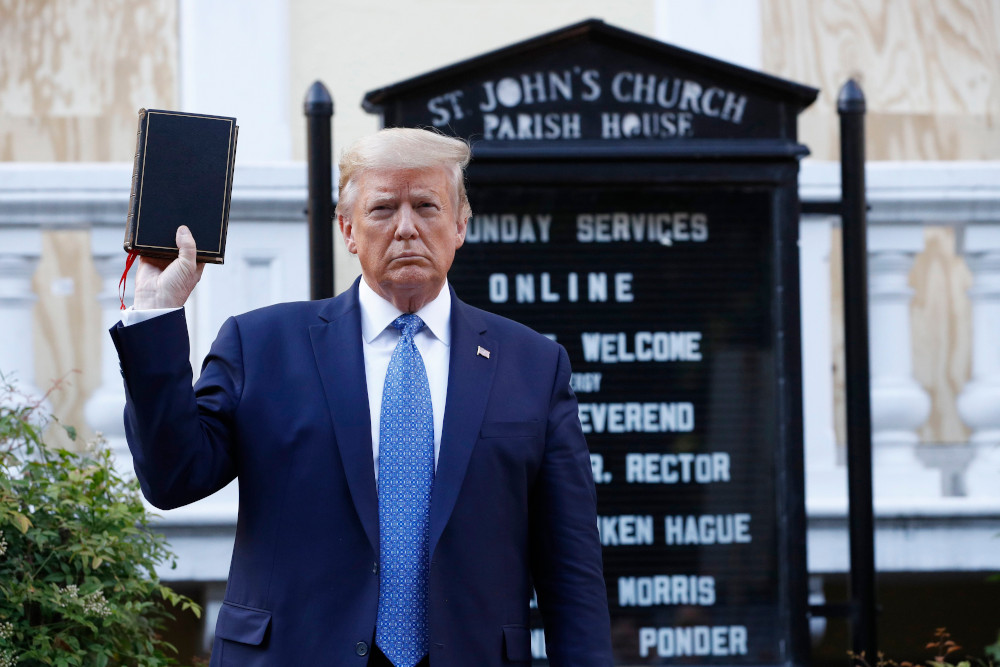 President Donald Trump holds a Bible as he visits outside St. John's Church across Lafayette Park from the White House on June 1, 2020, in Washington. Part of the church was set on fire during protests the night before. (AP/Patrick Semansky)

In the streets of Washington, D.C., we have seen religion used as a political prop and we have seen it exercise its prophetic voice.

On June 1, President Donald Trump infamously had the street in front of the White House cleared of protesters so he could use St. John's Episcopal Church on Lafayette Square as a photo backdrop. Not only were peaceful demonstrators tear-gassed, clergy were chased away from the church, which was turned into a political prop without the permission of its pastor or bishop.

The crassness of this photo-op was transparent to all but the president, who is used to being blessed by obsequious clerics in the Oval Office. If this were done in China, it would be denounced by the U.S. State Department as a violation of human rights and religious freedom.

Meanwhile, many of the demonstrators who had been pushed aside were responding to the prophetic call of their religious leaders. Racism was denounced as a sin, and police violence condemned as an assault on the life and human dignity of God's children. This prophetic voice was heard especially from black clergy, but white clergy and white believers also responded to the call.

Religion and politics have been locked in relationship since the dawn of humanity. Sometimes that relationship is healthy and sometimes it's exploitative. Working together in a positive way, the two forces have created community and fostered the common good. With the blessing of the gods, political leaders could rule without brute force. With the help of political leaders, great temples and works of art were created that enriched the religious and cultural life of the community.

Conflict between the religious and political leaders could also be healthy. Before there were elections, independent courts and the rule of law, religion often provided the only check on political power. There was a higher law than the law of the king, and the prophet could challenge the despot with the voice of God.

On the other hand, rulers sometimes became the only ones powerful enough to reform religious institutions that had become corrupt.

Over the course of history, prophets and reformers have only succeeded when the people supported them.

But when religion and politics were in an incestuous relationship, religion turned rulers into gods and political leaders corrupted religious leaders with wealth and gave them power to impose religious beliefs on unbelievers. Temples and churches became not houses of God but monuments to clerical power and privilege.

The history of the United States has seen these themes play out. Political and religious leaders supported slavery and racism in an incestuous relationship where religious institutions even owned slaves. On U.S. soil, religion too often became part of the establishment and turned against new immigrants, whether Catholic or Muslim, Irish or Chinese. 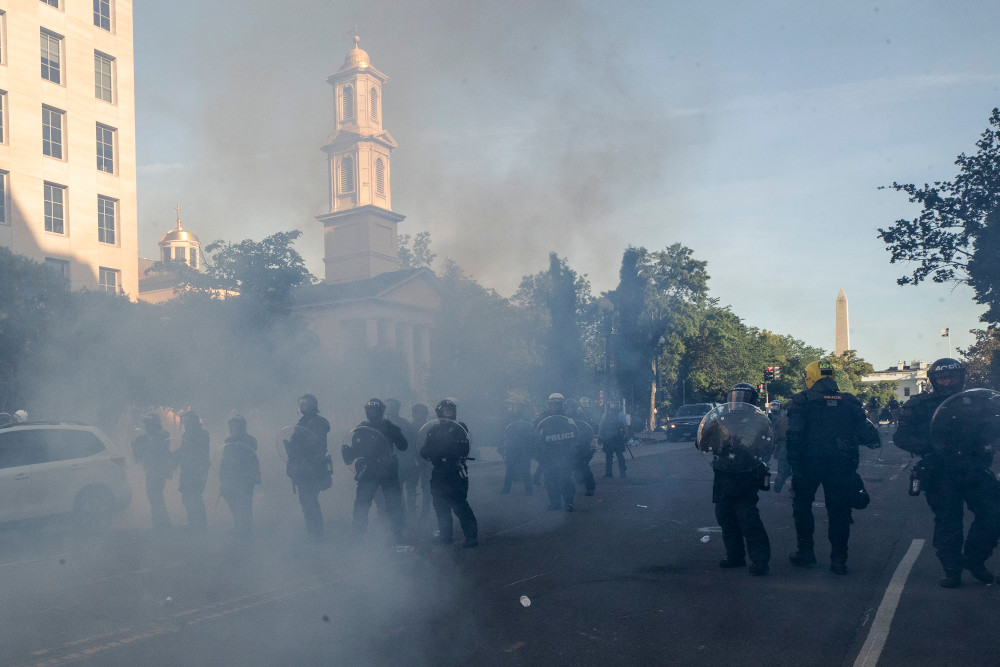 Tear gas floats in the air as a line of police move demonstrators away from St. John's Church across Lafayette Park from the White House, as they gather to protest the death of George Floyd, Monday, June 1, 2020, in Washington. Floyd died after being restrained by Minneapolis police officers. (AP/Alex Brandon)

Too often religion stood on the side of the status quo against workers, blacks, women, gays and social reformers. It too frequently used its political influence to protect criminal clergy and hush up scandals. It tried to impose its views about human behavior long after it had lost the support of the public.

But religion in America also had a prophetic voice, whether it was Catholic clergy defending Irish immigrants against the WASP establishment or black clergy leading the civil rights movement against racism.

Today, there are prophetic voices on almost every issue, sometimes on both sides. There are pro-life prophets and feminist prophets. How can we judge true prophets from false prophets?

Here are four ways to test a prophet:

1. Follow the money. No prophet in the Scriptures was ever rich. "What did you go out to the desert to see?" asks Jesus about John the Baptist in Luke's Gospel. "Someone dressed in fine garments? Those who dress luxuriously and live sumptuously are found in royal palaces." A true prophet does not get rich speaking for God.

2. Who are the prophet's friends? A true prophet is friends with the poor and the powerless. A false prophet keeps company with the rich and powerful. Jesus was criticized for keeping company with tax collectors and sinners. "Put no trust in princes," says the psalmist in Psalm 146. Prophets should not get in bed with politicians.

3. For whom does the prophet speak? The job of the prophet is to comfort the afflicted and afflict the comfortable. False prophets tell their congregations what they want to hear. We can see some clergy fawning over political leaders as others challenge them to protect the marginalized and serve the common good. A prophet who ignores the sins of his friends is a prophet for a party, not for God.

4. How does he speak? The words of a prophet can ring with righteous anger but not with hate. The prophet must condemn exploitation but have compassion for sinners. If there is no love in the prophet's voice, then he does not speak with the voice of God. A true prophet speaks only after listening and praying.

Religion can be a political prop or a prophetic voice. History should teach religious leaders not to get in bed with political leaders. Religious and political leaders can work together for the common good, but they should be enriching the community, not each other. A prophet can speak courageously about issues, but when he starts endorsing political parties and candidates, he is no longer speaking for God.