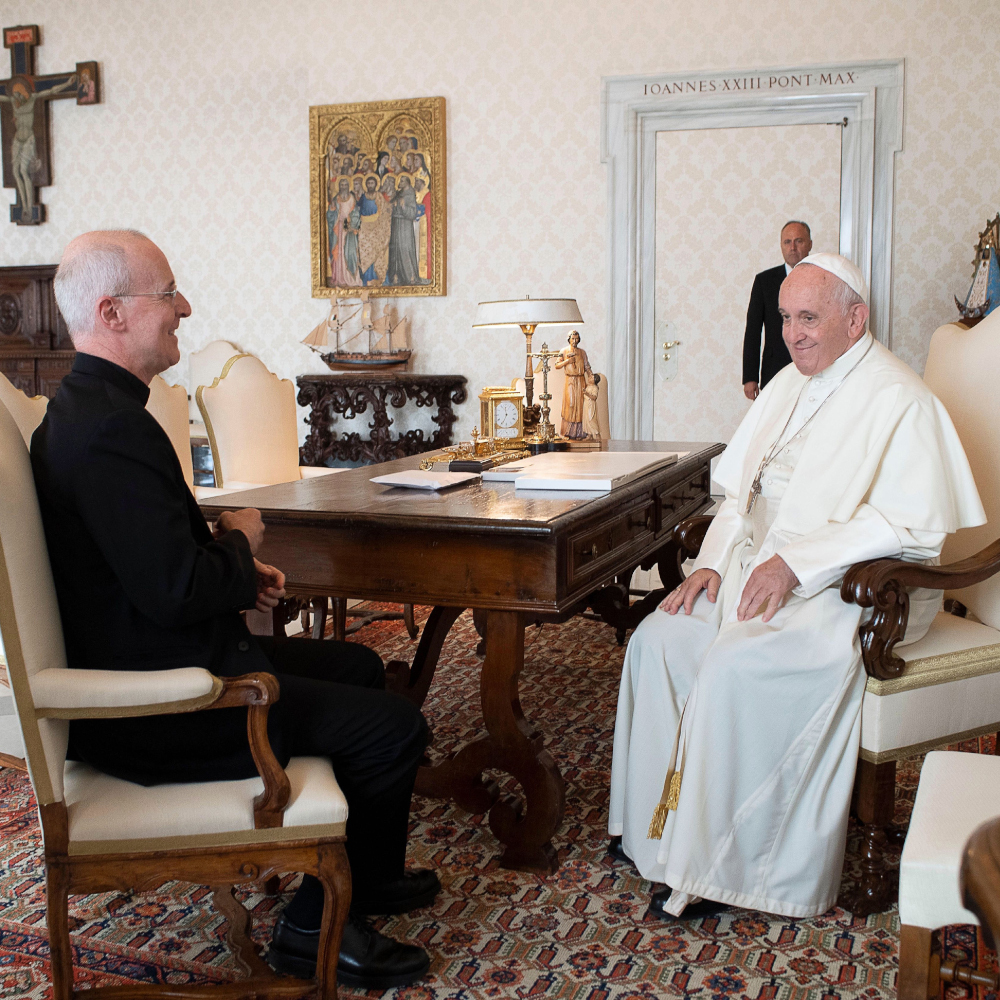 Pope Francis met this morning in Rome with the Jesuit Fr. James Martin, a Jesuit priest who has been viciously attacked for his outreach to LGBTQ persons and LGBTQ Catholics in particular. The two Jesuits share a pastoral approach that stresses compassion and accompaniment rather than condemnation and exclusion.

Full disclosure: Jim Martin is a good friend; he began working at America magazine when I was editor.

When asked about gay priests during his first year as pope, Francis responded, "Who am I to judge?" This is a pope who recognizes that we are all sinners, even himself, and that we are all on a common pilgrimage toward God.

Conservative Catholics are upset that Francis is more concerned about sins of exploitation and injustice than sexual sins between consenting adults.

For many Catholics, sexual sins are the worse kind of sin. Such sins were always grave matter. Although theologians praised marriage and procreation, in popular homiletics, too often, sex was presented as something dirty and evil. For the scrupulous, weekly confession was all about having dirty thoughts.

Sex between people of the same gender was an unspeakable sin. I grew up in the 1950s and had no idea what homosexuals were until I was in my 20s, although "sissies" were subject to bullying in grammar school and high school. Perhaps I was just out of it.

At the same time, the clergy and the convent were always an attractive vocation for good gay Catholics. After all, if you don’t want to marry and can’t have sex, why not be a priest or nun? The priesthood or religious life gave you a socially acceptable explanation for why you did not marry.

Celibacy, however, is neither easy nor natural. Conservatives feel that any softening of the church’s approach to sexual sins will release a flood of promiscuity. Without chastity, there will be unwed pregnancies and disease.  The only way to keep young people from having sex is by scaring the hell out of them.

Older people who grew up under this moral regime were appalled by the sexual revolution of the 1960s and 1970s. Unwed pregnancies, abortions and disease did increase. They saw the church as the last bulwark against this cultural revolution.

But few people today worry about going to hell. Even using traditional Catholic morality, many moralists and confessors believe that most sexual sins occur under conditions where there is not "sufficient reflection" or "full consent of the will" to qualify as mortal sins, even if you believe that all sexual acts are "grave matter."

Other moralists reject the idea that all sexual acts qualify as grave matters. They argue that the circumstances and attitudes of the people involved must be taken into consideration. Many Christian churches even accept loving relations between same-sex partners as blessed by God.

Neither Martin nor Francis have gone this far. They have never contradicted the church’s traditional teaching against sex outside of marriage between a man and a woman. This disappoints many who want to see the church’s teaching change.

While theologians debate such issues, Catholic pastors must deal with real people in their churches. Here, the compassion and love of Jesus should be our guide. He ate with sinners. He never got angry with sexual sinners. He only got mad at the scribes and Pharisees, whom he saw as hypocrites.

Certainly, all can agree that gays should not be subjected to violence or discrimination. We are all brothers and sisters of the same God. And if the church is not a country club for the perfect but a field hospital for the wounded, then all must be welcomed and loved.

Francis and Martin are simply imitating Jesus, who, by his example and words, taught us that our God is a compassionate Father who cares for all his children.