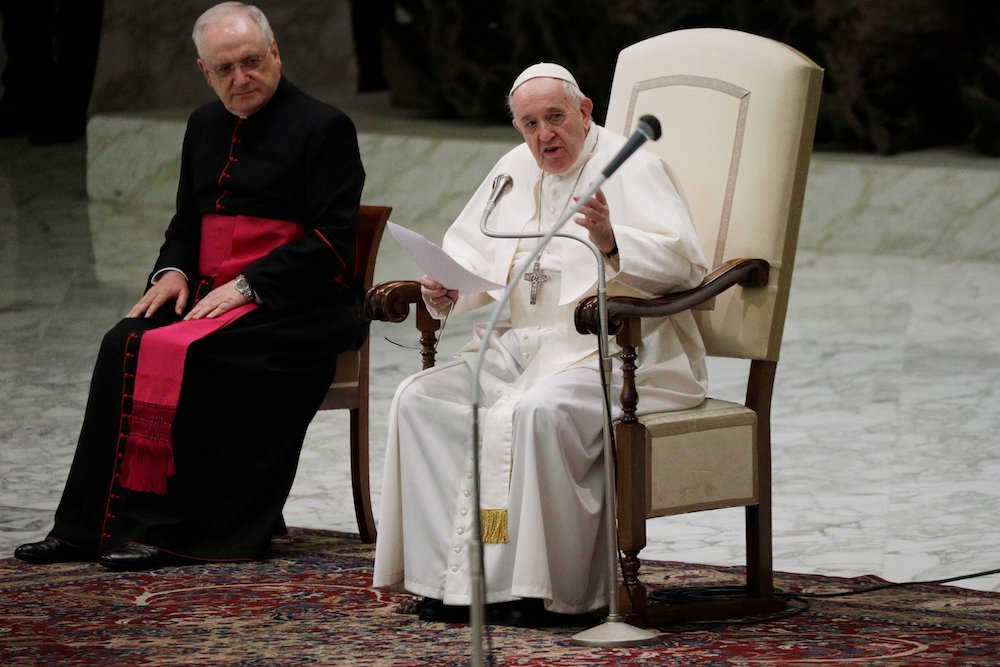 Pope Francis delivers his message on the occasion of the weekly general audience in the Paul VI hall at the Vatican Oct. 21. (AP/Gregorio Borgia)

In a documentary that will be premiered in the United States this Sunday at the Savannah Film Festival, Pope Francis has indicated his support for civil unions for same-sex partners.

"Homosexuals have a right to be a part of the family," said the pope in "Francesco," the documentary directed by Evgeny Afineevsky. "They're children of God and have a right to a family," he said. "Nobody should be thrown out, or be made miserable because of it."

"What we have to have is a civil union law; that way they are legally covered," said Francis.

There are six things you need to know about Francis and civil unions.

Francis has been thinking about civil unions for gay couples at least since 2010, when he was the archbishop of Buenos Aires and marriage for same-sex couples was under consideration in Argentina. But he could not get support for his proposals from the other Argentine bishops, so he dropped the idea, and the government legalized same-sex marriage.

2. One step forward, one step back

Supporters of gay rights within the Catholic community, such as Francis DeBernardo of New Ways Ministry, cheered the pope's words because it reversed earlier Vatican statements against any legal recognition of same-sex relationships.

Catholic institutions in the U.S. must now ask themselves, if having a family is a human right, can they deny spousal benefits to gay spouses? Can they fire gay employees who get married? This would appear to be a violation of their human rights.

On the other hand, the pope sees civil unions as an alternative to civil marriage for LGBTQ partners. He would like to preserve the "m" word for heterosexual marriage. If the pope's proposal for civil unions were followed in the United States and Western Europe, where marriage is widely available to same-sex couples, it would be seen as a major setback.

3. Important for Global South, not the U.S.

The pope's statement is irrelevant in the U.S. because the country has gone way past civil unions to marriage for gay couples, which is supported by 70% of Americans, including 67% of Catholics according to PRRI. There is no possibility of reversing that and going to civil unions.

DeBernardo believes that "with this statement not only has the pope protected LGBTQ couples and families, but he also will save many LGBTQ lives."

Many African bishops, however, will not be pleased by the pope's words. Even if they are sympathetic to LGBTQ persons, they know that most of their people are not.

Supporting civil unions in many African countries will open the church to attack from conservative imams and Christian clergy. In countries where religious tensions are inflamed, this is not a problem the bishops want.

If there is major pushback on the pope's words, it will come from Africa. Remember how LGBTQ issues have fractured the Anglican Communion in Africa.

4. It is about state law, not church law or dogma

Conservative Catholics are surprised to see Francis supporting civil unions when it is clear that Popes John Paul II and Benedict XVI opposed any "legal recognition of homosexual unions."

"The Pope's statement clearly contradicts what has been the long-standing teaching of the Church about same-sex unions," Bishop Thomas Tobin of Rhode Island said in a statement. "The Church cannot support the acceptance of objectively immoral relationships."

Such conservatives need to be reminded that all papal teachings do not have the same level of authority.

Francis is not changing dogma or doctrine or even canon law. He is talking about civil law, an area of prudential judgment.

Sts. Augustine and Thomas Aquinas, both doctors of the church, taught that not all morality should be enshrined in the law. Both, for example, believed that it was foolish to outlaw prostitution because the law would not be observed.

John Paul and Benedict in their times made the prudential judgment that civil unions were a bad idea. Times have changed. Francis is now making the prudential judgment that civil unions would be a good idea to protect the rights of gay couples. For example, the right to spousal benefits, inheritance, co-ownership of property and the right to make medical decisions for one's partner.

The pope is not changing church teaching on gay sex, no more than the church changed its teaching on divorce and remarriage when it gave up fighting divorce legislation in the 20th century.

In the documentary, the pope says that LGBTQ people are "children of God and have a right to a family," but does that include children? When Catholic bishops talk about families, they normally imply the presence of children. But the pope, in the past, said, "Every person needs a male father and a female mother that can help them shape their identity."

Has he changed his mind on this?

If so, it would have an impact in the U.S. church's fight over religious freedom.

On Nov. 4, the U.S. Supreme Court will hear arguments in Fulton v. City of Philadelphia, a case involving a Catholic foster care agency that has been denied city funds because it will not sponsor children with gay married couples. If the church no longer has a problem with gay couples raising children, then the case is moot.

6. The documentary is about more than gay civil unions

All the attention in the media has been on what the pope said about civil unions in the documentary, when in fact he talked about a lot of other things.

"If journalists will be focusing on this movie only on that, then it will be a pity," Afineevsky told AP.

"The documentary touches on multiple aspects of Francis' pontificate, from the economy to immigration to the environment and global inequalities," according to Religion News Service's Vatican reporter Claire Giangravé. It also reports on his pre-pandemic travels and the church's sex abuse scandal.

Pertinent to the United States was the pope's condemnation of separating immigrant children from their parents. Separating families at the border is "a cruelty" that "goes against natural rights," he said.