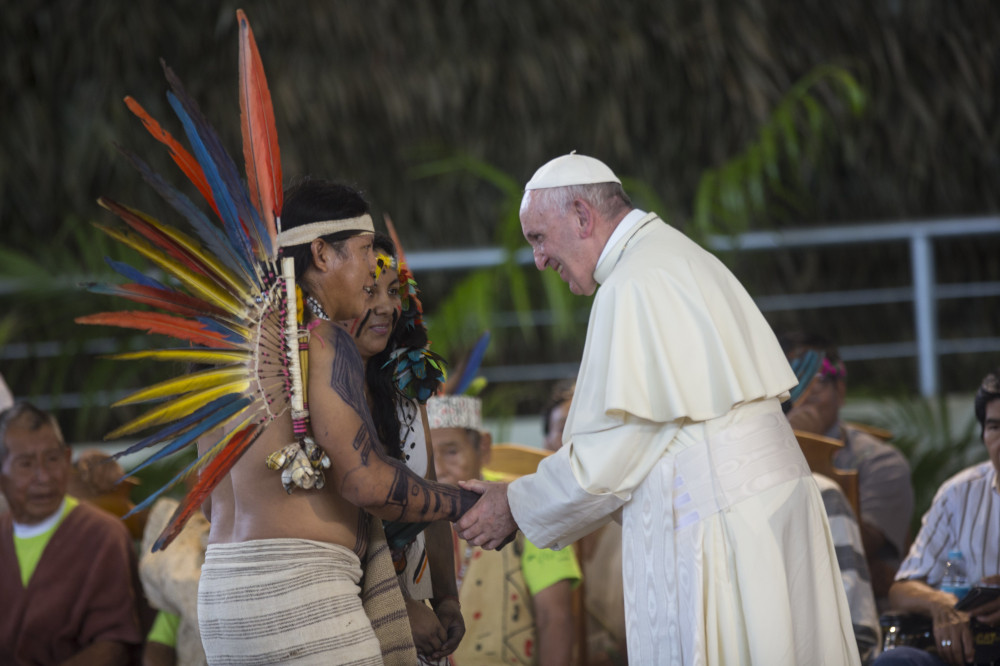 With the upcoming Synod for the Amazon, some people are only focused on whether it will recommend that the priesthood be opened to the ordination of married men, but there is a lot more at stake. True, the synod will discuss the possibility of ordaining married men because there is a shortage of priests to serve such a huge area, but that will be only one topic discussed.

The synod, which will take place Oct. 6-28, will primarily include bishops from the Amazon region called to Rome by Pope Francis.

Sheer size makes the Amazon important, as it includes Brazil and eight other countries with millions of people over thousands of square miles.

But for Pope Francis, the Amazon is also important because it touches on so many themes of his papacy: concern for the marginalized, evangelization and protection of the environment.

The indigenous peoples of the Amazon have been the victims of exploitation and genocide for centuries. They have been considered less than human by European and Latin exploiters, of value only as slave labor and beasts of burden. They have been pushed from their ancestral homes deeper into the jungle. Rape was common. Those who opposed the invaders were murdered.

Nor is this merely history; much of it is still going on as loggers, cattlemen, miners and agribusiness continue to press on indigenous peoples and land. It is no surprise that the pope, who has made the marginalized a focus of his concern, wants the world to cry out in protest against these atrocities.

Nor is the church innocent in the face of these abuses. Although historically a few priests and religious stand out as voices for justice, until recently the church was part of the system that denigrated indigenous cultures and tried to turn the natives into European Christians. Too often the church looked the other way rather than challenge the exploiters.

Besides defending the human rights of indigenous peoples, the pope wants the synod to look at how Christianity should be adapted to indigenous cultures. This is quite controversial with Francis' conservative critics. They believe that the European version of Christianity is somehow perfect and pure.

In fact, Christianity adapted itself to European culture in ways that would be unrecognizable to early Jewish Christians. The Apostles would be shocked by Baroque churches filled with statues and paintings. The Mass looks little like the Last Supper with Jesus that they commemorated. European Christians also took Greek philosophy and used it to develop a sophisticated theology to explain Christianity. It even adapted Roman law and governance structures for its use.

I am not saying that this adaptation was wrong. Christianity was successful in Europe because it did adapt to its culture. What is wrong is the monopolistic vision of European Christianity that does not allow other cultures to adapt Christianity as it did. Rather than allowing Christianity to adapt to local cultures, the European church imposed itself like other colonial powers.

For theological conservatives, this will be the most controversial topic at the synod because they believe that 19th-century European Catholicism is the absolute norm by which everything else must be judged. They know little about their own history and how Christianity was inculturated in Europe.

The third key topic of the synod is the protection of the Amazon environment, a topic of critical importance with global warming threatening life as we know it. This is the topic that will be most controversial with political conservatives and business interests.

The Amazon jungle has been referred to as the lungs of the Earth, but while human lungs change oxygen into carbon dioxide, the rainforest converts CO2 into oxygen. The use of fire to clear land in the Amazon is not only adding more carbon dioxide to the atmosphere, it is also mortally wounding the complex ecosystem capable of reversing the process on a massive scale.

The jungles are also home to innumerable species that will be wiped out when their habitat is gone.

The world is at a tipping point that will determine the lives of people for centuries to come. Future generations will look back on this generation and curse us if we do not make the sacrifices necessary to preserve our planet and its ecosystem.

The synod will not magically solve these environmental problems, but it will bring them to international attention in a unique way. I am not optimistic about the future, but for the first time in a long time, I am proud of my church for being on the right side of history.