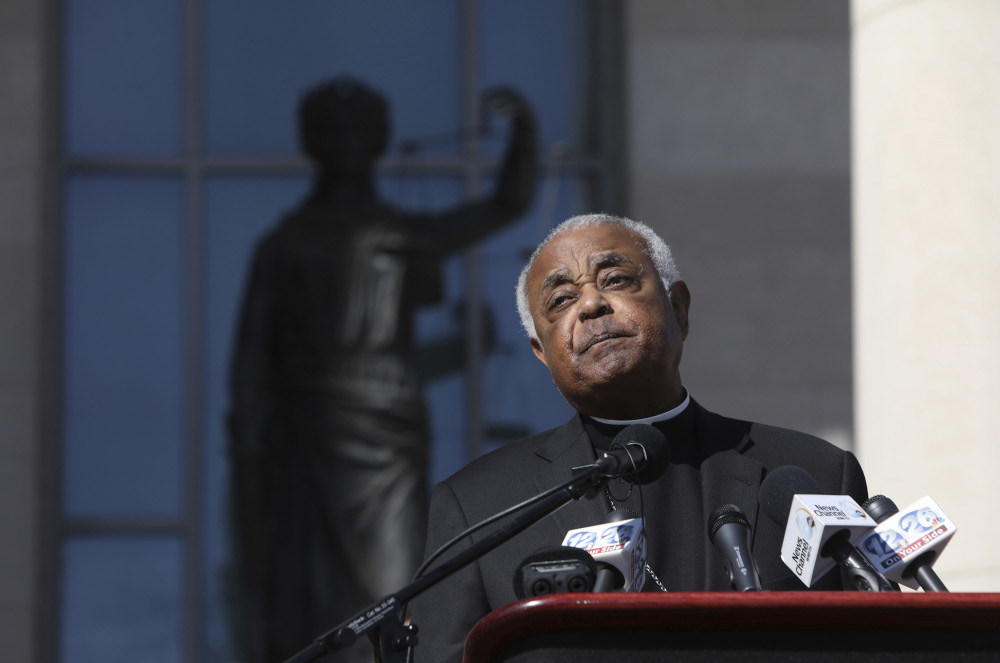 Archbishop Wilton Gregory, of the Archdiocese of Atlanta, speaks during a news conference at the Richmond County Courthouse on Jan. 31, 2017, in Augusta, Ga.(AP/Heidi Heilbrunn)

The appointment of Wilton Gregory as archbishop of Washington, D.C., is good news for the church, the city and the country.

If Gregory wants to accomplish anything, then, he will have to hit the ground running. Normally, new bishops, if they are smart, spend the first year or two listening to their priests and people before beginning to act. At his age, there is no possibility of having a 10-year plan for the archdiocese.

Is he up to the challenge? Yes.

Gregory has been a bishop for almost half his life, beginning as an auxiliary bishop at 36 years of age, only one year over the minimum age required by church law. Cardinal Joseph Bernardin of Chicago, Gregory’s patron and mentor, saw his potential and fostered his career.

Nor did Bernardin use him the way most diocesan bishops use their black auxiliaries — that is, put him in charge of an inner-city parish. Rather, Bernardin made sure Gregory was prepared to shepherd a diverse flock. This served him well when, in 1994, he was appointed bishop of Belleville, Ill., where he was the sole African-American clergyman.

He was also thrown into the clergy abuse mess in Belleville, where he suspended five priests as bishop. But over time his response gained mostly positive reviews. This experience served him and the church well when he became president of the U.S. Conference of Catholic Bishops in 2001, just before the Boston sex abuse catastrophe broke. As president of the conference, he was a real leader pushing the bishops kicking and screaming to adopt the Dallas Charter for the Protection of Children and Young People in 2002.

Gregory made a lot of enemies by pushing strongly for the charter. His mentor, Bernardin, also began to lose favor as the papacy of John Paul II turned the church in a more conservative direction. When Gregory was appointed to Atlanta, many church insiders concluded that he was being sent into exile. Bernardin, who died of cancer in 1996, had hoped Gregory would get Washington or another cardinalatial see.

You can bet that Bernardin is doing a victory dance in heaven.

As I said at the beginning, Gregory will be good for the church, the city and the country.

He has impeccable credentials for dealing with the sex abuse crisis, which is essential for healing the church. He also is very pastoral, able to connect with people of all backgrounds. He is smart and a good preacher.

He will also be good for the city, where the black population often feels marginalized.

He will be good for the country because he knows how to present the church’s message of justice, reconciliation and peace without appearing partisan. He is fully supportive of his mentor’s consistent ethic of life, which is concerned about abortion but does not abandon the child once it is born. His experience as president of the U.S. bishops' conference, where he often had to speak on issues of public policy, will serve him well under the spotlight of the Washington media.

Washington should rejoice to have such a good bishop; too bad we may not have him very long.