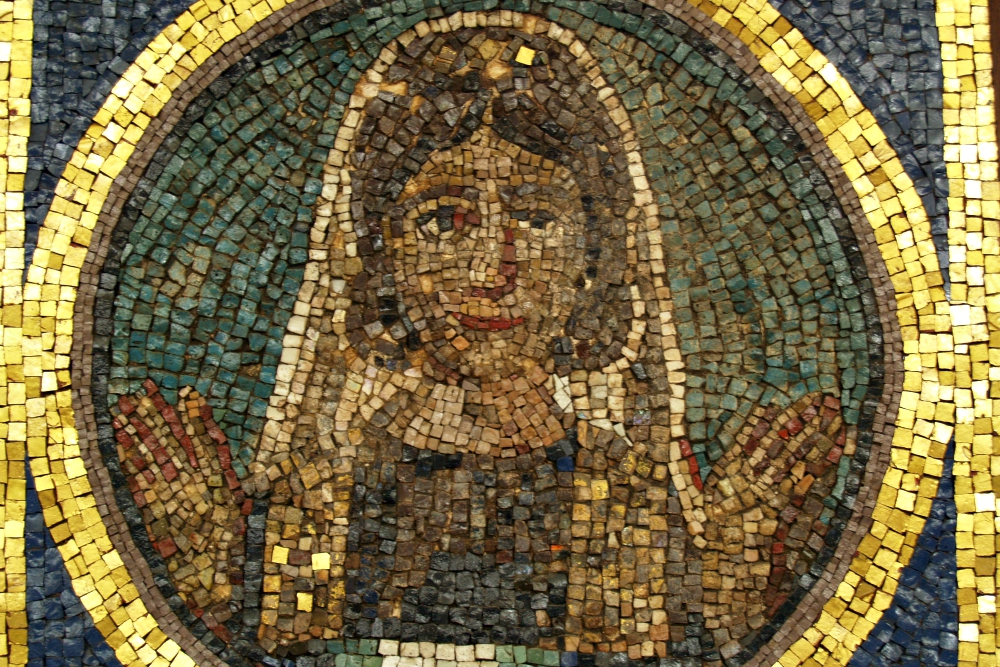 A woman is depicted at prayer in an ancient Christian mosaic seen in the Vatican's Pio Cristiano Museum. (Wikimedia Commons/Miguel Hermoso Cuesta)

Sometimes it is really difficult to be both female and Catholic.

On the one hand, I couldn't be prouder of the creative leadership taken by the University of Notre Dame and Pope Francis in working with oil executives to address climate change. It is amazing that dozens of Catholic institutions, including Caritas Internationalis, have divested from fossil fuels.

On the other hand, I am dismayed by yet another statement from the Vatican — this time from Cardinal-designate Luis Ladaria — prefect of the Congregation for the Doctrine of the Faith — about the non-ordination of women to the priesthood.

I have been tracking Vatican statements on women priests since the 1970s. They are invariably ahistorical and biblically naive. It is embarrassing. Worse, they bear false witness to the Jesus of history and are ultimately destructive to the body of Christ, especially the distaff side.

As a contribution to the ongoing conversation about women's roles in our church, I present here a few examples from mainstream scholarship about Jesus and the female exercise of authority in early Christianity.

Consider this from Ladaria's statement: "Christ willed to confer this sacrament on the 12 apostles — all men — who, in turn, communicated it to other men. The church always has seen itself as bound to this decision of the Lord, which excludes that the ministerial priesthood can be conferred validly on women."

Biblical scholars have long known that Jesus did not intend to found a new church led by 12 men, but to reform his own Judaic tradition. As such, the Twelve were meant to represent the new 12 tribes of Israel. They were not called to offer animal sacrifice at the Jerusalem Temple, as priesthood was understood in Jesus' day.

That Jesus included women in his itinerant Galilean discipleship is undisputed. Luke 8:1-3 tells us that Mary of Magdala, Joanna, Susanna "and many other women" accompanied him around Galilee. With Mary and Elizabeth, women were present and active in Jesus' life and ministry from womb to empty tomb. With Mary of Magdala, they were the first to proclaim the good news of Jesus' resurrection-victory over the powers of death.

From the first century, we see a repeating pattern of women exercising ecclesial authority in the growth of early Christianity:

Paul's letters are the earliest historical documents we have. From him, we learn more about the title "apostle." Writing between A.D. 40 and 60, Paul uses the word "apostle" inclusively to describe his own mission to the gentiles as well as that of other missionaries. In Romans 16:7, he calls Andronicus and Junia (a married missionary couple) "prominent among the apostles."

Twenty years later, after the fall of Jerusalem (A.D. 80-85), Luke's Gospel and the Acts of the Apostles reflect a growing struggle over who may exercise authority in the early church. Luke names three requirements for replacing the apostle Judas:

"Therefore, it is necessary to choose one of the men who have been with us the whole time the Lord Jesus was living among us, beginning from John's baptism to the time when Jesus was taken up from us. For one of these must become a witness with us of his resurrection" (Acts 1:21-22).

Luke's new criteria stipulate that apostles must be male, part of Jesus' original discipleship, and eyewitnesses to the Resurrection. They guarantee that the individual title of apostle will die out as the original witnesses die.

Further, prominent leaders such as Paul, Mary of Magdala, James of Jerusalem, Junia and Andronicus no longer qualify as "apostles." Ironically, third- and fourth-century churchmen will claim the authority of the apostles in imposing new church orders that exclude women from leadership.

Sadly, the practice continues to the present day.

Yet archaeologists and church historians point to gender balance in the exercise of authority in the early communities. For example, "ordination" as a "presbyter" (as priests were called at the time) did not take shape until long after Jesus' death and resurrection. And there is compelling literary and inscriptional evidence that in the fourth and fifth centuries, women held presbyteral titles. These early presbyters were the precursors of today's priests, and the evidence suggests that in some early communities both women and men functioned in these roles.

Ladaria's contention that a male-only priesthood belongs to the "substance of the sacrament" and cannot be changed because Christ instituted the sacrament is another example of the ahistorical nature of current Vatican formulations.

The Christian understanding of sacrament did not become part of church teaching until the Middle Ages. It is the product of later reflection by exclusively male members of the body of Christ. This is not to say that sacraments are not a central part of Catholic teaching, as well as a beautiful way of describing the action of God in our lives. It is to say that this theological construct did not have the benefit of the Spirit-guided insights of the female members of Christ's body.

It is perhaps for this reason that Cardinal Christoph Schönborn, in an Easter interview with the Austrian publication Die Presse, called for a new council to discuss the matter:

One of the key questions is the role of women in the church. In this, religious organizations as a whole are in need of development. ... The question of ordination is a question that surely can only be settled by a council. A pope cannot decide this by himself. This is too large a question for it to be settled from the desk of a pope.

A version of this story appeared in the Sept 21-Oct 4, 2018 print issue under the headline: Women and men were leaders in Jesus' church.